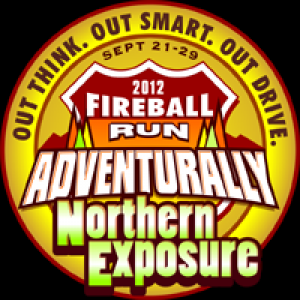 UNIVERSAL STUDIOS, FLORIDA– The FIREBALL RUN is an 8-day, 14-city, 2,500 mile interactive Adventurally; a life-sized trivia game with real exotic vehicles as the game pieces and America is the game board.

Participants ranging from Shuttle Astronaut, Jon McBride; Gallup NM Mayor, Jackie McKinney; President of the Rock and Roll Hall of Fame, Terry Stewart; a Vice-President from Mars Candies, and 80 other business leaders competing in the most riveting and original live point-of-interest & destination based expedition in America. To navigate the route, teams solve clues based on history, science, nature, theology, pop culture, and virtually anything in relation to their geographical location- once found, they must accomplish missions in order to score.

FIREBALLRUN.com/LIVE is the interactive website where kids of all ages may play along with the life-size board game, live the adventure, listen to the clues, and follow the progress of their favorite FIREBALL RUN Teams just as if they were in the live adventure.  It is a great tool for building knowledge while enhancing problem-solving skills.

Using the interactive leader board, fans see the action unfold with livesteaming video, chat with driving teams, watch scores update live, even track teams as they travel across real-time satellite photos via technology powered by RealTrackGPS. FIREBALL RUN.com/LIVE provided users online resources to have fun, educational, and immersive experiences while learning about destinations scripted into the series.

Although a trivia game there is nothing trivial about its purpose or results. FIREBALL RUN is often referred to as “the most fun you will ever have, doing the most important thing you’ve ever done.” As each FIREBALL RUN team is assigned a missing child from their home region and provided thousands of posters to distribute along the route. A decal featuring the child is affixed to the vehicle, creating a rolling awareness campaign. To date, the effort has assisted in the recovery of 38 missing children. FIREBALL RUN’s philanthropic campaign called the Race to Recover America’s Missing Children is the largest active recovery effort for missing and exploited children in the country.

Fans worldwide can watch this year’s Adventurally; themed “Northern Exposure” beginning Saturday September 22 in Independence OH, until the dramatic conclusion and parade finish Saturday, September 29th in Bangor ME, other official destinations include; Wellsboro PA, Jamestown, Watertown, and Schenectady New York, as well as Waterbury CT and Ogunquit, ME.