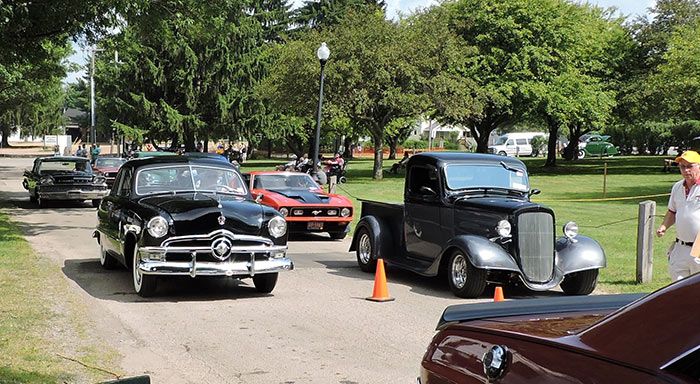 This year’s World Series of Cars will once again take over Bergman Park on Baker Street in Jamestown, New York rain or shine, on Sunday, July 24. The park gates will open at 8 a.m. and the show will run until 5 p.m.

“The World Series of Cars is a great thing for our city,” said John Bauer, a key organizer of the event since 1980. “It boosts our local economy and it promotes some really fine kids through the Babe Ruth organization.”

What’s New?
Kim Ecklund and John Bauer, this year’s chief organizers of the show – along with a volunteer army of more than 100 – were pleased to reveal a few new features guests will enjoy at the 2016 edition of the World Series of Cars. First, organizers are hoping for more than the usual 300 to 400 cars on display.

It will be hard to beat last year’s Best in Show winners, Dan Tavano’s ‘68 Chevy Camaro and Jerry Serratine’s 1957 Chevy Nomad. But the show will add new categories this year, beyond the ones judged by the traditional rules of the Antique Automobile Auto Club of America.

“This year were attracting more than ever non-judged cars,” Eklund said. “Today people are modifying cars more than ever in very unconventional ways and they want to display their cars. They create amazing cars that do not fit into the Antique Auto Club’s 46 regular judging classes for the traditional, meticulously restored older models.” These newer designs are bound to appeal to car lovers of every age this year.

“And this year we are moving the cars up to the front of the park,” Ecklund said, “right along Baker Street. We want people who drive by to see what’s going on. We hope they will be amazed by what they see and come right in. It’s a neighborhood spectacle as well as a show in the park this year.

“We’re making room for more motor cycles, too,” Ecklund added. “They are very popular, both old and new.”

All competing cars will all be on the field by noon on Sunday. Judging is slated for completion and presentation of trophies and awards is scheduled to begin as close as possible to 4:30 p.m. at the grandstand.

Feasts and Vendors
“This year’s vendors will have a much wider selection of crafts and goods to offer than last year at the flea market,” Ecklund said. “Displays and sale items will no longer have to be limited to car-themed items.” Vendor and sponsor booths may exceed 15 to 20 this year.

Early birds will enjoy a breakfast at the park anytime between 7 a.m. and 11 a.m. at the Pavilion. Breakfast will be provided by Meals on Wheels, as their biggest annual fundraiser. Enjoy breakfast at the show and support a great community service.

The traditional and ever popular World Series of Cars Chicken Bar-B-Que will be ready for the show goers between noon and 4 p.m. All the usual carnival food will be on hand, too, including freshly grilled burgers and dogs, Italian sausage with onions and peppers, kettle corn and much more. Nobody goes away hungry.

The World Series
The annual World Series of Cars and the Labor Day Festival are the major annual fundraisers for the Babe Ruth Little League World Series hosted in Jamestown every other year. The event costs about $150,000 to put on. Estimates show, however, that the World Series brings at least a $1 million to Jamestown and the entire county when the nine top teams from across the nation, plus Jamestown’s team, take to the ball field to compete for the World Series crown.

The World Series of Cars, in support of Babe Ruth, is presented by the City of Jamestown and the Lake Region Antique Automobile Club of America, in cooperation with the Chautauqua County Antique Equipment and Tractor Association, the Chautauqua County Corvette Club and the Southern Tier Classic Chevy Club.

“The City of Jamestown has been extremely supportive, too,” Ecklund said. “Dan Stone and the Jamestown City Parks Department are doing a phenomenal job as always. We really appreciate their work. We hope people who come to the show will see their role in the whole affair, too, and see how much they contribute to the great success this show always is.”

You Be the Judge
“You don’t have to be a car expert to be a judge,” Ecklund said. “One more class is scheduled to train car show judges,” she added. It will be held on Wednesday, July 20 at 7 p.m. at the park’s Pavilion. Judges need no previous experience. This is a one hour class which will teach judges exactly what to look for and how to rate all the important features required for judging by the rules of the Antique Automobile Club of America. Those interested are encouraged to attend.

Spectator gate donation $3 for adults and children under 12 are admitted free. To learn more, visit http://www.jamestownworldseries.org/carshow and https://www.baberuthleague.org/2016worldseries/.