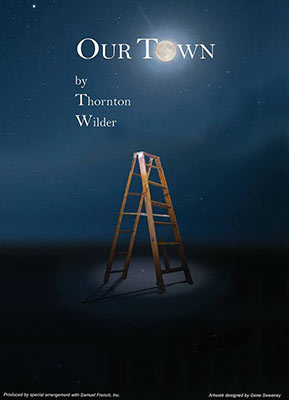 The play was once described by playwright Edward Albee to be “…the greatest American play ever written.” Although it was first presented in 1938, it remains a perennial favorite, with a plot and theme that transcends the original time and place. Set in the fictitious small town of Grover’s Corners, and performed in three acts: “Daily Life”, “Love and Marriage” and “Death and Eternity”, the story follows two families throughout their lives from birth to death.

The Winged Ox Production will be directed by Daniel Pierce and Marge Fiore, and features many familiar faces, including Jamestown’s Director of Development, Vince DeJoy who will be making his stage debut, and Cassadaga Mayor Lee Ann Lazaroni. The cast is rounded out with several new and well-known local actors of all ages.

This production marks the start of the 5th Anniversary Season for the Winged Ox Players, an outreach ministry of St. Luke’s Episcopal Church. Founded as a means to utilize the artistic talents of the parish and the greater community, the group presents plays that deliver a thought-provoking message while raising funds to support local agencies. In the first five years of existence Winged Ox’s productions have donated over $5000.00 to various community organizations.

A basket raffle will be held in the lobby at the Willow Bay Theatre during each night’s performance. Proceeds from the ticket sales and the raffle will go to support Jamestown’s sober living houses, the Birdie Turner House and The UCAN Men’s House. These houses have supported hundreds of community members over the years in a dignified way on their road to recovery from substance use disorders by providing a safe drug and alcohol free environment.

Artistic Director Steven Cobb is encouraged by the Winged Ox Players sustained presence in the community, and is eager to announce two upcoming productions to be presented by the group.

“The remainder of this seasons shows are very exciting.” Cobb says. “In November Winged Ox will be producing an audience participation murder mystery dinner theater, which will be held at Jones Valhalla Restaurant on North Main Street. In addition, this year’s spring production will be an original, multi-media play written by a local playwright that will focus on addiction and recovery in Jamestown.”

Tickets for “Our Town” are $10. Advanced tickets may be purchased at St Luke’s church office, 401 N Main Street, Jamestown (716-483-6405). Information about the Winged Ox Players can also be found on Facebook: https://www.facebook.com/wingedoxplayers?fref=ts.