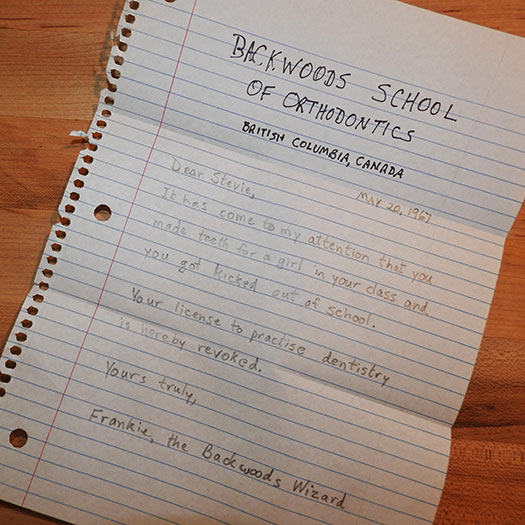 He also figured out that if he knew more than his friends knew, he’d always be the one in control. “Knowledge is power!” he’d say. Sometimes he added, “France is bacon.” I never understood that part, but if Randy read it somewhere it’s probably true.

One day Randy told me about a mountain man from Canada who needed dentures to eat the deer he shot. Since there were no dentists on the mountain, the guy made his own teeth. Well, he didn’t actually make the teeth. He used teeth from the deer to make a set of uppers. His name was Francis Wharton. People called him “Frankie, the Backwoods Wizard.”

We had a girl named Frankie in our school. She was a lot of fun up until she was about 11. Before that she was pretty gullible. After that she was just pretty. Other guys got mad when she started beating us in our games. She played this trick of looking real soft but playing real hard. It took away the fun.

The next day we were playing softball and Frankie slid into third base. The left fielder, a girl named Bobbie, threw the ball to that exact base. It hit Frankie in the mouth and broke off three of her front teeth. Randy said it was just a bad bounce, but Bobbi could have thrown the ball to any other base. Why third base? Because Frankie was prettier. And a better player. That’s why!

That’s when I remembered the guy who made himself a set of choppers from deer teeth. Since my Frankie needed only three teeth, I figured I could make her a set. At last! Frankie would have a reason to like me!

I reckoned being a dentist pretty much boiled down to common sense, like the work the road crew does except on a smaller scale. Drill a tiny hole, pop in some cement, smooth it over, and the cavity is gone. It would be easier for me because I wouldn’t be patching, and I’d be working on teeth that aren’t in someone’s mouth.

Luckily I had a deer skull I found in the woods. The deer didn’t have any cavities, so I popped all the teeth out and found three I could file into some nice looking front teeth. I filed little hooks on the roots so they’d get a grip on whatever I’d use to fasten them together. Then I drilled tiny holes and ran a piece of wire through to hold them in line.

I rummaged around in my dad’s shop and came up with a tube of JB Weld. I worked that stuff around the hooks I filed into the roots, tightened the wire and covered it except for the ends which would anchor around her solid teeth, and smoothed it out real nice. For cushioning, I glued in a layer of rubber from an old inner tube.

I wanted everything to be perfect. I put Frankie’s dentures in a nice little box and included a tube of Polident. I even tied a pink bow on it. I mustered up some courage, marched up to her, and handed her the box. This would change everything between us. I even decided to become a dentist, so I could make a nice living for Frankie and me. And I could save us a lot of money when our kids got teeth! It was the biggest plan I ever made for my life.

Frankie opened the box, burst into tears, and threw it at me as hard as she could. It left a bump on my forehead. What happened? I never did anything nicer for a girl. And for crying out loud, my head had the bump on it! So why was she the one crying out loud?

A few minutes later I was sitting in the principal’s office getting expelled from school for mocking Frankie, but why would I do that? Up until then I was pretty sure I loved her!

When I was on my way out the door Randy came running and handed me an envelope. Inside was a letter from the Backwoods School of Orthodontics. It said, “Your license to practice dentistry is hereby revoked.” Signed, Frankie Wharton, the Backwoods Wizard.