In my previous article “What’s in a Name? (I)” that appeared in the April 17 issue of the Jamestown Gazette, I speculated that Jamestown’s Brooklyn Square was named “in honor” of Brooklyn, New York. What gave credence to this “Brooklyn-by-analogy” theory was my research that was based on evidence that “Brooklyn” or the “Brooklyn side” was a common designation for that part of a city or town that was to the south of a brook, stream, or river just the way Brooklyn is separated, to the south, from Manhattan by the East River. We know for certain that our Brooklyn Square is south of the Chadakoin, thus echoing and substantiating this topographical naming of that part of the city.

But if Brooklyn Square was, indeed, named “in honor” of one of New York City’s boroughs, another “honor” was conferred on it when, on October 27, 1919, the long-standing appellation of Brooklyn Square was changed to Roosevelt Square. This may be a little known fact to many Jamestonians, but again the questions I posed at the beginning of my previous article—“What’s in a name? Why are names so important? Where do they come from?”—still resonate. Why, indeed, Roosevelt Square?

To answer this question, we have to go back to the turn of the twentieth century, in fact, November 1, 1900, when Theodore Roosevelt, the governor of New York, was William McKinley’s Republican vice-presidential running mate. Roosevelt’s historic visit to the city of Jamestown is recorded in part in my transcription of The Jamestown Evening Journal’s account of that speaking tour in my most recent book, Remembering Brooklyn Square: The 1930s to the 1960s. In that newspaper article that is an extraordinary piece of reporting, Roosevelt’s visit was proclaimed as the “largest and most enthusiastic celebration in the history of the city…a remarkable campaign [with] thousands of men, mounted and on foot in the line of march [as] thousands listen to the stirring utterances of the gallant Rough Rider.” Teddy Roosevelt spoke at four venues while he was in Jamestown: the Sherman House, the First Swedish Lutheran Church, the Veterans’ McKinley and Roosevelt Club, and Brooklyn Square, where he gave his first political speech in western New York. And herein lies the spirit.

In 1919, the year of Theodore Roosevelt’s death, Brooklyn Square, the well-established business district of Jamestown, was renamed in his honor by resolution of the city council on October 27, which was the anniversary of Roosevelt’s birth—and thus the birth of Roosevelt Square. The name remained so until November 23, 1925, when the council resolved that Roosevelt Square revert to its original name, Brooklyn Square, as the old name of the Square was still in common usage. 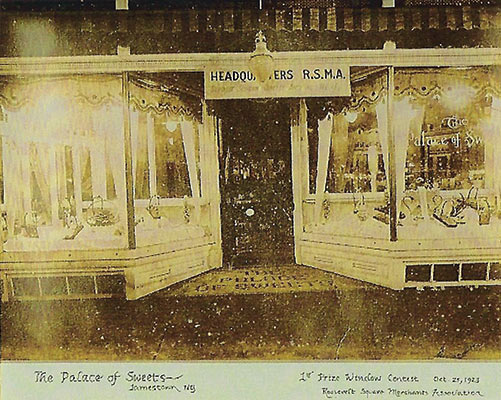 Although this change of name may seem cut and dried, to merchants and some citizens of Jamestown it wasn’t anything like that. Even though businesses did not move an inch from their former locations in the Square, business owners had to change their addresses in city directories, phone books, and especially in their advertising to reflect the name change, which may have been costly.

There are always a few die-hards among us, and by far, one of my favorite stories about the long-lasting impact the name Roosevelt Square had on some Jamestonians is from John A. Swanson. His paternal grandmother never again referred to Roosevelt Square as Brooklyn Square even when the original name was once more reinstated by the city council. John still remembers his father correcting her: “Ma, it’s Brooklyn Square.” Then again, John recalls his grandmother’s dislike of the “Star-Spangled Banner.” She sang “O Columbia” as the national anthem well into the 1950s. As John proclaimed in his article “Strolling Through Brooklyn Square”– “Now that’s a stubborn Swede!”

Although the name change from Brooklyn to Roosevelt Square had a deep impact on business owners and some individuals, the city council really had a fight on its hands when, in November of 1925, the members proposed that the name of Roosevelt Square be changed back to Brooklyn Square, a name that had been in use for at least half a century and was still being used by some Jamestonians—aside from Mrs. Swanson! 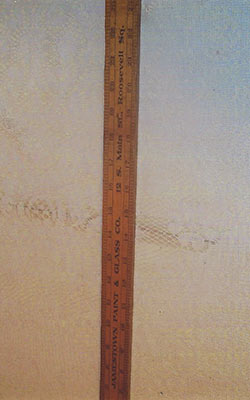 A debate occurred in the council chambers on the night of November 23 urging members to retain the name Roosevelt Square based on the fact that a Roosevelt Theater was to be built on site. Attorney Clive Wright, appearing on behalf of the theater clients, argued that it would be detrimental to the owners of the theater to have the name of this area of Jamestown revert to Brooklyn Square. I imagine the logic behind his argument was that the name of the theater would have less of an impact on the public since its name was not in keeping with its location. The members of the council, however, were not persuaded, and the proposal to “re-adopt” the name Brooklyn Square stood fast and was carried unanimously. From November 23, 1925, until its destruction during urban renewal in the late 1960s and early 1970s, that area of the city was forever known as Brooklyn Square.

The theater was, indeed, named the Roosevelt Theater and, despite the argument put forth by Attorney Wright that night, its business flourished under that name until the early 1950s when it was renamed the Park Theater. If readers still remember the delight the B movies and ongoing serials gave to young and old alike at the Roosevelt, all may learn about the heyday of this popular theater at 31 S. Main Street in old Brooklyn Square in a section entitled “The Roosevelt Theater” in my second book Brooklyn Square, The Lost Neighborhood, and Beyond–available for reading at the Prendergast Library, in the Chautauqua Room of the Hultquist Library on the JCC campus, and for sale at Off the Beaten Path Book Store in Lakewood and the Fenton History Center in Jamestown.

And there you have it for those of you who have followed my edict: “Stay tuned”! 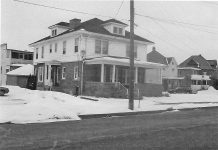 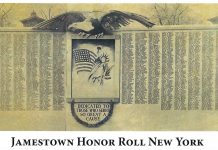 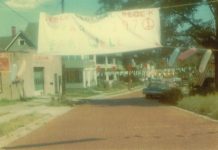