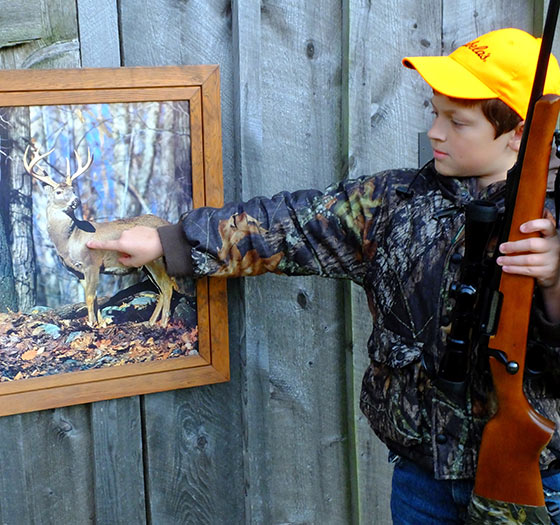 As a teenager I shot my first two bucks with a .222 Remington. An adult friend encouraged me to buy it saying, “It’s so fast that if you hit a buck in the rump it will rupture the blood vessels in his head.”

That’s not only a flagrant exaggeration; it suggests shot placement isn’t all that important. The exact opposite is true. The smaller the caliber, the more critical shot placement is. So, we will talk about shot placement, but first let’s consider a couple of other things as we arrive at a common sense answer to the question, “Does a .22 centerfire make a good deer rifle for a kid? Or should he use something a little larger?”

Although the .222 is nearly obsolete now, we still have plenty of .22 centerfires. Many advice givers recommend the .223 Remington, or others, as good cartridges for young hunters. Mild recoil is the reason. Recoil (what the shooter feels) should be considered, but what happens inside the deer is crucial. Which is more important, the kick the kid feels? Or the performance of the bullet in the deer?

Before making any conclusions, let’s discuss getting a 12-year old ready for his first deer hunt, with two different guns. And let’s assume he has little shooting experience.

First, put a .22 centerfire into his hands. Have him shoot 80 to100 rounds during four or five sessions. Help him to relax. Take all the pressure off him. Coach him to shoot with precision. Instruct him about deer anatomy so he knows where he should aim. Teach him about shot angles so he understands the path of the bullet through the deer. These are vital lessons.

Next, put a .26 caliber rifle into his hands. Shoot the same number of shots, get him to relax, eliminate pressure, coach for precision, and teach anatomy and shot angles. By focusing on these things he will not only learn vital lessons, he is likely to become less conscious of the additional recoil — which is still far less than the .30 calibers and the magnum rifles have.

After this training, the young person with limited experience is likely to be better off with the .26 caliber rifle because a bigger, heavier, more destructive bullet will give him more margin for error. That will be important when the shot isn’t perfect.

Now back to shot placement. Someone will always say a well-placed shot from a small caliber rifle will kill any deer.

I won’t argue with that, but if precise shot placement is really the issue, who will be more capable with the .22 centerfire? A 12-year old who has no first-hand exposure to deer anatomy and has never shot at a deer? Or a 30-year old who has shot and field dressed 15 to 20 deer and is less affected by adrenaline, what we commonly call “buck fever”? If shot placement truly is critical, can we really say the .22 centerfire is a good gun for a hunter who lacks experience?

Why did I choose to compare the .22 caliber to the .26 caliber? Because as a kid, I did shoot deer with a .22 caliber centerfire, so I know it can be done. And because I’m not trying to push a favorite cartridge—I do not own a .26 caliber rifle (and haven’t even shot one.) But I’ve shot deer with cartridges on both sides of the .26 caliber, and I read ballistics charts. They tell the tale.

If it turns out the young person cannot tolerate the recoil of the .26 caliber rifle, by all means equip him with something lighter, a .25 caliber or a .24 caliber. But let’s not say the .22 caliber is a good choice for a young hunter when we have many better choices.

Shot placement, recoil, and the terminal performance of the bullet are all important. And when all three of these are considered, the best gun for a kid is something bigger than a .22 centerfire. I’m not against a .22 centerfire in the deer woods, but the hands carrying it should be the hands of an experienced hunter.