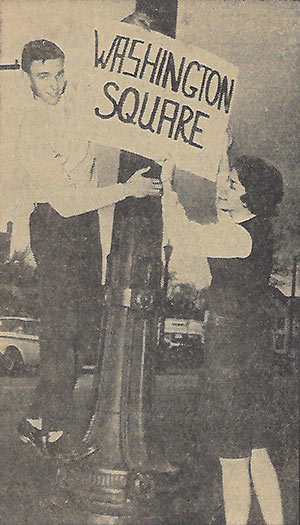 Although the renaming of Brooklyn Square, a time-honored name in Jamestown’s history, may have seemed preposterous to some, it nevertheless was the caption of a photograph that appeared in the Friday, November 22, 1963 issue of the JAMESTOWN POST-JOURNAL, second section of the newspaper, page 9. It featured two Jamestown High School students, Kenneth Hauck and Patricia Terwilliger, hanging a new three-day sign printed with WASHINGTON SQUARE on a lamp post in Brooklyn Square to publicize the senior class play “My Sister Eileen” that was to have been performed at 8:00 p.m. on Saturday, November 23, in the Merton P. Corwin auditorium at JHS.

The comedy deals with the hilarious adventures of two sisters from the Midwest, Ruth and Eileen Sherwood, seeking their careers as a writer and an actress in New York City as they take a basement apartment in the equally time-honored area of Washington Square in Manhattan’s Greenwich Village. The leads were shared by Sandra Cheslock who played the older sister Ruth, an aspiring writer, and Carolyn Demarest who played Eileen, an aspiring actress. As I recall, two of my former junior English students, in addition to Ms. Demarest, also had parts in the play, namely Gary Haber and Ray Frew. The entire cast consisted of thirty players, and John Rood and I were the directors.

Of course, some of you readers of my December column “The Players Brought Christmas” may recall that the performance of the play had to be postponed because of Kennedy’s assassination on that fateful day of November 22, 1963 and wasn’t presented until two weeks later. The senior class play was a high point for JHS seniors, a dear tradition of every senior class, and several photographs of the cast of the play plus various scenes filled the pages of the 1964 Red and Green. However, one caption said it all: “A virtuoso performance of the spirited comedy, ‘My Sister Eileen,’ by Chodorov and Fields, was the Class of 64’s offering to Jamestown audiences this year. Despite an unexpected postponement, the production still showed freshness on performance night. The audience found that the seniors really knew how to put on a fast-paced production filled with antics.”

For you drama and movie fans, it may be of interest to know that the original Broadway play opened in New York City at the Biltmore Theater on December 26, 1940 and played through January 16, 1943. It was produced by Max Gordon and directed by George S. Kaufman. I had no idea I was in such esteemed company when I was co-director of the play! As I mentioned, the play centers around two sisters from Columbus, Ohio who are out to make successful careers in New York City while living in an iconic rundown basement studio apartment in a Greenwich Village building owned by Papa Appopolous. The story is almost a cliché! It is based on autobiographical short stories by Ruth McKenney that were originally published in THE NEW YORKER. A movie based on the real-life experiences of Ruth McKenney and her sister Eileen was made in 1943 and starred the incomparable Rosalind Russell as Ruth and the beautiful Janet Blair as Eileen. Brian Aherne also starred.

But apparently the story never lost its flavor because in 1955 “My Sister Eileen” was made into an American Cinemascope comedy musical film directed by Richard Quine and starred Janet Leigh (Tony Curtis’s wife for you movie buffs), Betty Garrett, and the great Jack Lemmon. The screenplay was by Quine and Blake Edwards (Julie Andrews’s husband for you movie fans). This musical film that retains the same name as the Broadway play and 1943 movie is totally different from the 1953 Broadway musical “Wonderful Town,” although both are based on the original Ruth McKenney sources. By the way, “Wonderful Town” is a wonderful movie with lyrics by the great team of Betty Comden and Adolph Green with music by none other than Leonard Bernstein.

So that’s pretty much the history of the play the 1964 class of JHS seniors presented. And, as you guessed, the “renaming” of Brooklyn Square to Washington Square was short lived! However, at one time in its history, from 1919 to 1925, Brooklyn Square did undergo a serious renaming to Roosevelt Square in honor of Theodore Roosevelt who gave his first political speech in western New York in Brooklyn Square as President William McKinley’s vice-presidential Republican running mate on November 1, 1900. If you are interested in pursuing this part of the Square’s history, you can read all about it on page 95 in an article I wrote entitled “The Roosevelt Theater: A Varied History” in my second book BROOKLYN SQUARE, THE LOST NEIGHBORHOOD, AND BEYOND (2013) and page 162 as part of my article “Theodore Roosevelt’s Historic Visit to Jamestown, New York: November 1, 1900” in my third book REMEMBERING BROOKLYN SQUARE: THE 1930s TO THE 1960s (2015). Fascinating stuff, especially when you discover how that name that has lived on in the city’s history was almost usurped not only by Jamestown’s city council but by the members of the JHS Class of 1964!

Every Four Years…And Then Some