What is VE Day and do we still remember its significance? For those of us who recall that eventful day on Tuesday, May 8, 1945 it marked the formal acceptance by the four chief Allied powers of WW II—Great Britain, France, the United States, and the Soviet Union—of Germany’s unconditional surrender of its armed forces. It marked the end of the war in Europe and the defeat of Nazi Germany and Hitler’s Third Reich. We are just a few days past the 76th anniversary of VE Day—Victory in Europe–and even though the celebration in the city in May of 1945 was muted by the fact that the war was still raging in the Pacific, we probably all have memories of family members and friends and neighbors who served in that conflict.

Of the thousands of Jamestown men and women who served in WW II and whose names were recorded on the Jamestown Honor Roll erected in Fenton Park, some were from the Lost Neighborhood and adjacent blocks. In a recent 2020 article published in the Post-Journal, Jim Auria recounted how the seven sons of Mr. and Mrs. Frank Mitchell, his wife Connie’s brothers, who lived at 44 Harrison Street, served with distinction in both the European and Pacific Theaters: Dominick, James, Joseph, Samuel, Sabatino, George, and Charles. Joe Mitchell was in the US Navy and remembered his ship being hit by a Japanese kamikaze flown on a suicide mission. The other Mitchell boys served in the US Army in Africa and Italy and took part in the D-Day Normandy invasion on June 6, 1944 as the military forces and Allied troops pushed through Europe to invade Germany and thus bring an end to that chapter of WW II. A star for each brother adorned the service flags in the Mitchell’s front window, and in a article entitled “25 years Ago (1944)” that appeared in the Post-Journal in 1969, readers were reminded that this family’s service was “a Jamestown record.” All returned. 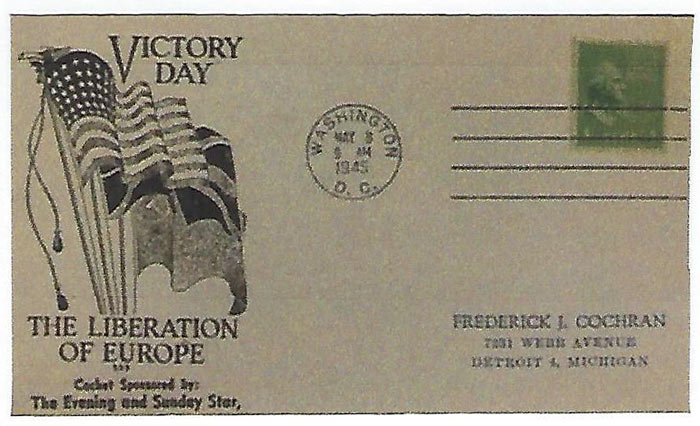 St. James R.C. Church on Institute Street was the spiritual center in the lives of those who resided in the old neighborhoods of Allen, Harrison, and Derby Streets and those who dwelled in apartments in Brooklyn Square. Among my father’s things at his death in 1978 was a small paper folder issued to those who attended a Holy Mission at St. James in February of 1945 in acknowledgment of service men who were engaged in the battles of WW II. My father had several family members to pray for: cousins in the US Army; a nephew, Anthony Cusimano, who was in the Merchant Marine; and a brother-in-law, Ignatius Cordosi, the husband of his youngest sister Anna, who was part of the US Army’s D-Day forces that landed on Omaha Beach, where the highest casualties of the American landing force occurred. All were parishioners of St. James. The dedication to these service men reads: “During the past week I attended the Holy Mission at St. James Church for you. On Sunday, February18th, I assisted at the closing ‘Military Holy Hour’ in your honor, and fervently prayed that Almighty God will keep you close to Him and return you safely home in the near future.”

Also included was “A Serviceman’s Thought of His Mother” that follows:
She traveled the road before you
She has known all the cost of the way.
She paid out the price to its fullness
That Motherhood only can pay.

She loved when the
world was against you
She hoped when your
hope sank and died.
She clung to your hand
when the clinging
Left scars in her heart deep and wide.

She labored and loved
and was happy
For down deep in her kind
heart she knew
Your kindness and love
would repay her
For all that she did—just for you. 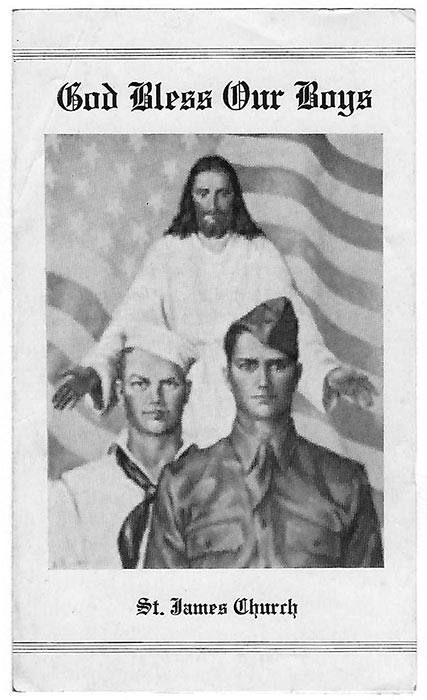 My Uncle Ignatius Cordosi, known to us as Uncle Nay, was due to come home some time in 1945 after Germany’s surrender. I remember going to my Aunt Anna’s home and waiting for my cousins to pick him up at the Erie railroad station on W. Second Street—but he was not on the train that night and the party was off. Nor was he on any incoming trains until a few days later when my mother and I received word of his homecoming and took the bus alone, because my father was at work and my big brother John was in school, to 314 Allen Street to see my uncle, still in uniform, come up the steps to the house, sweep my mother into a hug and kiss and lift me above his shoulders as a welcome for his safe return. Years later, when I was brave enough to ask him about the Normandy invasion, he said that when he hit the water, he dropped his kit bag and kept only his rifle and ammunition—adding that he saw his commanding officer take a bullet to the head. He said no more of the horrors of that day but went on to say that he fought all the way to Berlin.

In commemoration of the liberation of Europe, a 1945 Washington, D.C, patriotic post card cover proclaiming victory in Europe (VE Day) was issued—a day to remember.