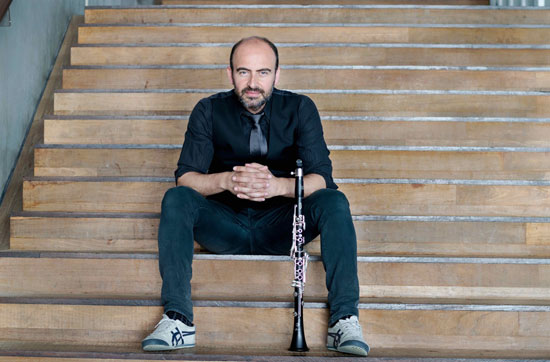 The Jamestown Concert Association concludes its 2017-18 season of Transcending Borders with Kinan Azmeh, clarinetist and Dinuk Wijeratne, pianist on Friday, May 18th at 8 PM at St. Luke’s Episcopal Church, 410 N. Main St., Jamestown. The two musicians perform selections from “Complex Stories, Simple Sounds,” a collaborative project between the Award winning Syrian clarinetist and composer Kinan Azmeh and Sri Lankan-born Canadian innovative Pianist and composer Dinuk Wijeratne, both Juilliard school graduates. The project fuses elements of Arabic and south-east Asian vocabulary with classical and jazz music idioms to create a new sonic world that the legendary Marcel Khalife called “wings of Breath”. The duo has been touring the US, Canada, Latin America, Europe and the Middle-East since 2009.
Born in Damascus, Syria, Kinan Azmeh is in the rare position to use his music as a truly unifyin¬g language. Hailed as a “Virtuoso” and “Intensely Soulful” by the New York Times and “Spellbinding” by the New Yorker, Mr. Azmeh has more than just technical talent. His utterly distinctive sound across different musical genres has gained him international recognition as clarinetist and composer. He has appeared as soloist with the New York Philharmonic, the Seattle Symphony, and the Syrian Symphony Orchestra among others. Most notably, he is also a member of Yo-Yo Ma’s Silk Road Ensemble with whom he was awarded a Grammy in 2017. The Silk Road organization “creates a more hopeful world through music, radical cultural collaboration, and passion-driven learning.” kinanazmeh.com
Sri Lankan-born Canadian Dinuk Wijeratne is a JUNO award-winning composer, conductor, and pianist who has been described by the Toronto Star as ‘an artist who reflects a positive vision of our cultural future’, and by the New York Times as ‘exuberantly creative’. His boundary-crossing work sees him equally at home in collaborations with symphony orchestras and string quartets, tabla players and DJs, and takes him to international venues as poles apart as the Berlin Philharmonie and the North Sea Jazz Festival. Dinukwijeratne.com
Concert tickets are available pre-sale from the Reg Lenna Center for The Arts, Chautauqua Music, & Germaine & Pappalardo, or call 484-7070 or 487-1522. Also available at the door. Ask about group rates. Children 18 & under are admitted free with an adult ticket-holder. Corporate sponsor for this concert is Jamestown’s Rental Properties. JCA is supported by the Chautauqua Region Community Foundation, the Ralph C. Sheldon Foundation, and the United Arts Appeal of Chautauqua County. Funded in part by the New York State Council on the Arts Decentralization Regrant Program with support from Gov. Andrew Cuomo and the NYS Legislature.