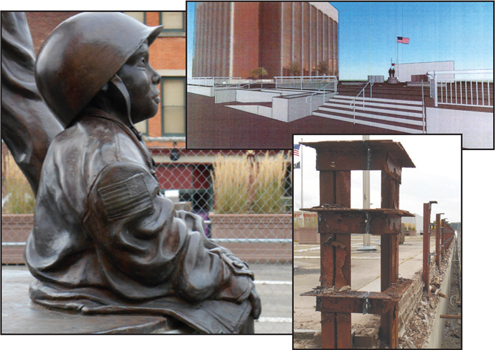 The three or four year planning and renovation project on Tracy Plaza and the City Hall is slated for completion this summer. The architectural drawing shows the Plaza as a much more user-friendly and open environment.

“The new railings will make City Hall much more inviting, and open for people to see the decorative plantings and monuments on the Plaza. It will be an even more attractive and popular place for public celebrations and gatherings. Until now, the walls have made Tracy Plaza a pretty closed-off area,” Jeff Lehman, Director of Public Works for Jamestown, explained recently to local residents watching the work at the downtown corner of Third and Spring Streets. “This work is long overdue,” Lehman added.

A new railing system will replace the damaged and confining parapet walls which have now been removed. However this is only the most visible of the many improvements now underway. “Rearranging the displays, monuments and the other artistic aspects of Tracy Plaza, if we decide to do that, will have to wait until after structural repairs are complete,” Lehman added.

According to Lehman, serious structural defects in Tracy Plaza have surfaced in recent years. Sections of the concrete along the outer walls of the Plaza’s foundation have fallen off. Structural damage to the brick work beneath the concrete was also found. In addition, water leaking through the Plaza deck into the parking garage below has raised the possibility of damage to vehicles of city workers, police and the Jamestown Fire Department.

Time and whether have also taken their toll on the Jamestown municipal building. In addition to repair work on the Plaza deck and its foundation, 24 of the gold windows in City Hall will be replaced due to cracking and other forms of damage. The Windows, which have advanced insulation and light filtering properties, require specialized manufacturing processes which few suppliers can provide.

The repair and renovation funding was unanimously approved by the Jamestown city Council in June 2013. More than $800,000 will be spent in completing the Tracy Plaza renovation project and the glass replacement is proposed for just under $200,000.

“We are very pleased with the contractors who have been selected for this work,” Lehman said. Though they were the only bidders on the Plaza construction project, CPS Construction Group from Cheswick, Pennsylvania is a company the city has worked with before. “They do quality work,” Lehman said. CPS also completed the work on the Spring Street Parking Ramp, the city garage floor and other important projects. A Jamestown company, D&S Glass, will complete the City Hall glass replacement work.

The Tracy Plaza and the City Hall renovation projects will repair and eliminate hazards which have concerned Jamestown city officials for some time and the window replacement work will help maintain the City Hall building’s efficiency and integrity for future years, according to Lehman.