Clymer is planning a bicentennial celebration linking the past to the present! It will be a day remembering the founding fathers of the town – a modern day testimony to the existence and endurance of the early settlers, to the immigrants who followed them and to the joyous town of today.

Clymer settlement commenced in 1820 by Gardner Cleveland, a Revolutionary War veteran, and his son, John. They located on Lot #58, a knoll on the southwest corner of the town. The land then was a primeval forest with no roads and only Indian trails.
On February 9, 1821, an act was passed by the NYS legislature dividing Clymer from the town of Chautauqua. The new town’s name honored George Clymer, a patriotic Pennsylvanian who signed both the Declaration of Independence and the United States Constitution. The act also directed that the first town meeting be held at the home of Gardner Cleveland, and so, in that rustic log cabin on the knoll, the first town meeting was held April 3, 1821. Ande Nobles was elected Supervisor, other offices were filled and resolutions were passed to: raise $250 for roads, contribute $25 to support the poor, provide money for schools, control hogs which were running free, and pay a $5 bounty for every wolf killed. Raising sheep was a good way to start a farm since they foraged in a small area and their fleece provided wool for homemade clothes. The wolves which preyed upon the sheep had to be controlled and it was noted that early resident Peter Jaquins had collected a bounty on 100 wolves! 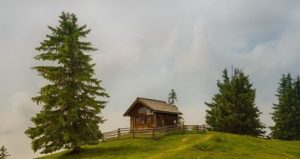 To meet the community’s other requirements, the first schools were open three months of the year in 1821, probably in someone’s home. John Stow established a store in Clymer in 1823. “Black salts” were made by burning trees to ashes and selling the “salts” to the storekeeper to further refine in an ashery: those salts were a source of much-needed cash. Alvin Williams established an Inn in 1826. Enterprising Peter Jaquins built a saw mill in 1825 and added a grist mill in 1826. A tannery, built by Ebenezer Brownell in 1830, made leather for harnesses and shoes and created jobs. William Rice, who bought Lot #59, close to Gardner Cleveland in 1824, was a blacksmith and also taught school. He later was sent to the New York State legislature in 1840 representing Chautauqua County. His son Victor would become New York State Superintendent of Public Instruction.

A national financial panic in the late 1830s created much uncertainty for the infant community. When a new wave of Dutch immigrants began to arrive in the 1840s, the gloom turned into opportunity. These farm families from Holland cleared more trees, planted crops and started to cultivate the beautiful farmsteads and eventually gave the community much of the heritage which exists in the Clymer of 2021. These early pioneers, English and Dutch, were the kindred of today. They established a way of living and a sense of communal harmony that exists in the here and now.