In this, my fourth article about the Fentons of Jamestown, NY, my research has taken me far and wide, from Walnut Grove, the home of Gov. Reuben Eaton Fenton’s family that lived on the terraced hills above Brooklyn Square, to State and Sixth Streets, the opulent residence of Mr. and Mrs. Charles Halleck Hayden in Columbus, Ohio. Governor Fenton’s two daughters, Josephine and Jeannette, and his daughter-in-law, Lillian Mai Hayden, who married his only son Earle Fenton, each in her own way contributed to the social, cultural, political, and philanthropic interests of their time.

Josephine Fenton, born in 1845, was the older daughter of Reuben and Elizabeth Scudder Fenton. She attended Elmira College (formerly known as Elmira Collegiate Seminary and later Elmira Female College) and graduated in 1864. When her father was a senator from New York (1869-1875), she lived in Washington, enjoying the social and cultural life of the capital, and acted as his social hostess.

In 1882 Josephine Fenton married Frank Edward Gifford, a prominent Jamestown business man and president of the First National Bank for 40 years. The couple had two daughters, Josephine Francesca Gifford (1883-1884) and Cecile Gifford (1885-1965). The Giffords lived for many years at 9 Prospect Street, close to the Fenton mansion. However, in 1888 Frank Gifford bought the entire Long Point property on Lake Chautauqua, and after the turn of the century, he built a home on the highest point, diagonally across from Chautauqua Institution, where he and his family spent their summers. It later became known as the Minturn mansion, the property of the Giffords’ daughter, Cecile Gifford Minturn.

Josephine was a cultured woman, and she was instrumental in helping found the Mozart Club in 1883, an organization that inspired talent and furthered an appreciation of music for its members and others. She was the club’s president for 40 years. She also organized Creche in 1900 when she “suggested that her daughter and her friends meet during Lent to sew garments for babies in WCA Hospital.” These Lenten sewing meetings became a Creche tradition, and even during war years, when sewing materials were in short supply, members made sure they raised funds so that their work could continue. As part of her philanthropic endeavors, Josephine Gifford served on the WCA Hospital Board of Directors for 20 years and raised $440,000 to build a new section of the hospital. Mrs. Gifford’s work on behalf of the citizens of Jamestown typified her public spirit that was also a great part of her parents’ lives.

Josephine Gifford was also a member of the Women’s National War Relief Association that was founded during the Spanish-American War and incorporated at Albany, NY on May 31, 1898. Its purpose was to “give comfort to the officers, soldiers, and sailors in the United States Military…and to supplement with material aid the sacrifices of time, strength, and life made by the men of the nation” during that military conflict. In addition, Mrs. Gifford was a member of the American Scenic and Historic Preservation Society that was created in 1895 in New York State as a national organization “to protect the natural scenery and the preservation of historic landmarks…records of the past or present…and erect memorials and promote appreciation of the scenic beauty of America.” As part of her efforts, she gave the Society receipts signed by Red Jacket, a Seneca chief and orator so named for his wearing of a red coat given him by the British during the American Revolution, for the museum at Letchworth Park.

The Fentons’ second daughter, Jeannette, was born in 1849. Like her sister Josephine, Jeannette attended prep school in Elmira, NY. She married Johnston Niven Hegeman, a pharmacist from New York City, in 1870. The couple had three children: J. Niven, Elizabeth, and Elsie. Jeannette divorced Hegeman in 1880 and married Capt. Albert Gilbert, Jr. in 1883; they had one child, Earle Fenton Gilbert, so named for Jeannette’s younger brother, Earle Fenton. Like her mother and sister, Jeannette was a strong supporter of the suffrage movement, and in the public spirit of those women, she was a founder of the Jamestown YWCA. Her second husband, Albert Gilbert, an entrepreneur, along with Frank Gifford was one of several Jamestown business men who organized the Fenton Metallic Company of which Earle Fenton was president.

In 1890, while spending the winter in St. Augustine, Florida, Earle Fenton met and courted Lillian Mai Hayden, the daughter of Charles Halleck Hayden, one of Columbus, Ohio’s wealthiest business men. The Fenton History Center was especially generous in making available to me several letters written to Earle Fenton by his mother, his sister Jeannette, and his niece Elizabeth Hegeman, all expressing their desire to meet Lillian as she would be visiting the Fenton family during the summer of 1890 in anticipation of a fall wedding. In particular, Earle’s sister Jeannette wished to claim Lillian for a week of hospitality and getting to know her “new sister” and to tell “her the good things about my dear brother that he is probably too modest to tell her.” Jeannette also mentioned “How beautiful their [the Haydens] Island home [on “Fairyland” Island in Alexandria Bay in New York’s Thousand Islands] must be and hoped Earle “will bring home a picture of it all.” Earle Fenton’s young niece Elizabeth, who was very fond of him, thought Lillian “must be perfectly lovely” and “ought to be reminded that in a few months, she is to have you always” and if Earle’s “sojourn at Hayden island is benefitting your health and making you beam, why stay on [and] enjoy it.”

One of Earle Fenton’s good friends, Ralph Preston, who was working at the U.S. Consulate General’s office in Paris, France, opened his letter with “My dear Old Fent,” congratulated Earle on his engagement to Lillian, and asked for particulars: “where you met your divinity and when all this has come about, tell me about her, what are her particular characteristics, dark or blond—and as a last consideration is she ladened with this world’s goods. I am delighted that at last Walnut Grove is to have a young mistress.”

I have no photograph of Lillian; nevertheless, words make pictures. Articles from the Columbus Evening Dispatch and the Ohio State Journal published on October 3, 1890, one day after the wedding of Earle and Lillian, describe the bride in detail: “The bride, lovely in white crepe de soie over white satin, with a wedding veil, wearing a diamond pendant, a gift from the groom, and orange blossoms and carrying calla lilies and bridal roses, with the maid of honor and bridesmaids, in gowns of Nile green crepe with short veils and wreaths of maiden hair fern and carrying bouquets of pink roses, and gentlemen in full dress, made a beautiful picture. The wedding was one of the most brilliant that ever occurred in the city [of Columbus], and a number of guests from abroad were present. Equally brilliant was the reception given at the residence, corner of State and Sixth Streets, of Mr. Charles Hayden.” The bride and groom left after midnight “for the country residence of the groom, near Jamestown” that was probably the home in Lakewood, NY of Mrs. Elizabeth Fenton, Earle’s mother. On October 15, the couple left for Europe, where they spent the winter months.

Five years later, in March of 1895 after a sojourn in Egypt and while Earle and Lillian were visiting Naples, Italy in anticipation of coming home to the U.S., Earle fell ill with typhoid fever and died at the age of 29. Before he passed, he asked Lillian to request in her will that a statue of his father, Gov. Reuben E. Fenton, be cast and placed on the grounds of Walnut Grove. True to her husband’s wishes and after her death in Daytona Beach, Florida on May 4, 1933 and interment in the Hayden mausoleum in Columbus, Ohio, the executors of Lillian’s will, E.T. Powell and Raymond Beightler, carried out Earle’s wishes, and a bronze statue of his father, executed by Bryant Baker, was dedicated on July 4, 1934 on the 115 th anniversary of Gov. Fenton’s birth with family, friends, and dignitaries of New York state attending. Harry C. Lindholm, City Council president, spoke eloquently at this ceremony, reminding those present that “the donor, Mrs. Lillian Hayden Fenton, has performed a great service to Jamestown in this expression of generosity. She in truth has shown philanthropy in one of its finest expressions.”

We have Lillian Mai Hayden Fenton, Gov. Fenton’s daughter-in-law, to thank for that statue that pays tribute to one of Jamestown’s most illustrious citizens that still stands to this day on the grounds of Walnut Grove that, for generations of Jamestonians, has been known as Fenton Park. 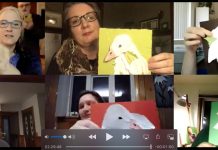