Chautauqua Striders Athletic Club was well represented at Sunday’s Buffalo Marathon. Twelve members formed three teams in the Relay Divisions of the 26.2 mile race. Capturing the Men’s Masters title in a time of 3:00:08 was the team of Joe Campbell, Scott Gregory, Grant Vincent, and Chris Lawson. Bringing home their second consecutive Women’s Open title in a time of 3:09:44 was the team of Brooke Adams, Judy Porpiglia, Mindy Lawson-Crabtree, and Karen Stangl. Taking seventh place in the Co-Ed Open Division with a time of 3:17:14 was the team of Bruce Main, Eddie Scroxton, Karen Fuller, and Nicole Garland.
Jake Krolick, the recently hired Chautauqua Striders Head Track Coach, competed in his first full length marathon and was the first local finisher, placing an impressive fourth overall in a time of 2:25:43. Kiplangat “Kip” Tisia of Rochester and Kenya defended his title in a course record time of 2 hours, 15 minutes and 59 seconds. Tisia also won the 2014 Lucy Town Half Marathon in a record time of 1:09:30.
Additional participants from Strider Athletic Club were Irv King who completed the marathon in 3:24:22 , John Samuelson in 4:49:47, and Mac Mackenzie finished first in female age 70-74 in the half marathon with a time of 2:28:06.
The mission of the Chautauqua Striders Athletic Club is to encourage and promote lifelong fitness through running and walking. Benefits to club members include regularly emailed race applications and race results and a monthly Athletic Club e-newsletter. Members also receive a 25% discount on running shoes and apparel at The Jock Shop, and discounted registration on Striders races. There are also opportunities to participate on a competitive club team, as well as the camaraderie of social running groups and volunteerism. Membership dues help provide financial support to a younger generation of runners through Chautauqua Striders Youth Track and Field Program. For more information about the Striders Athletic Club call the office at 716-488-2203 or download an application at www.chautauqua-striders.org [1]. Annual dues range from $15.00 for a full-time student, $25.00 for an individual, $35.00 for a married couple, or $40.00 for a family. 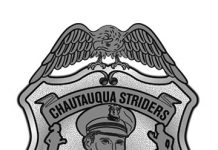 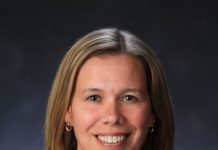 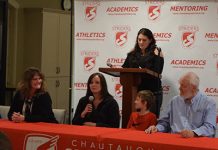