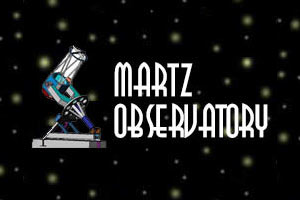 Stafford’s presentation is titled, “Physics of the Solar System.” Mike specializes in bringing astronomy and physics down to Earth in a fascinating and enjoyable conversational style for the general public.

Mike Stafford is a former instructor of physics at Penn State – Behrend. He also taught at Mercyhurst before taking his current post at Gannon. His interests in physics are wide ranging, but he has a special interest in classical mechanics – why things move the way they move – especially, as he will discuss on Wednesday evening, the planets and moons of the Solar System. Outside of physics, Mike is a private pilot, a licensed parachute rigger, and a currently inactive expert parachutist. He is also an Extra Class ham radio licensee. He reads widely and promises he can talk on any subject, sometimes coherently.

After the presentation, guests of the Martz/Kohl Observatory are welcome to visit one of the largest public robotic telescopes in Western NY and tour the observatories.

If the weather is clear, the all-volunteer staff of the observatory will be using the telescopes to view the night sky and they will be inviting guests to see the universe from atop Chautauqua County’s highest point under the county’s darkest skies.

Please dress warmly because, although the classroom and control room are heated, the two observatories and the elevated roll-off-roof observation platform are not.

A donation of $5 would be appreciated. The Martz/Kohl Observatory is entirely supported by generous local foundations and visitor contributions. This is a public observatory because of the public’s support.

The observatory is located at 176 Robbin Hill Rd. in Frewsburg. From the 5-corners intersection in Frewsburg, follow the large, blue and white signs to Martz Observatory.

In the April-May Skies

On the night of April 22 and early morning of April 23 the Lyrids Meteor Shower will produce about 20 meteors per hour at its peak. The light show is produced by dust particles from comet C/1861 G1 Thatcher, first seen more than 150 years ago. The Lyrids sometimes display bright dust trails that last for several seconds.

On the night of May 6 and early morning of May 7, the Eta Aquarids Meteor Shower may produce as many as 30 to 60 meteors per hour at its peak. This display is produced by dust particles left behind by the famous Halley’s comet. The thin crescent moon will set early and leave dark skies for what should be a good show.