Last Tuesday, hundreds of students from across the south end of Chautauqua County converged at Strider’s Field in Jamestown to compete in the 47th annual Special Olympics. Cheered on by a large crowd of teachers, parents, volunteers, and fellow students, the athletes had a chance to compete in various track and field events and show off their talent.

According to Special Olympics Director Bob Goold, however, the day was about much more than winning ribbons for races and jumps. The Special Olympics is an event that was designed to build confidence and self-esteem among its student-athletes, as well as to promote understanding, acceptance and inclusion between people with and without intellectual disabilities. 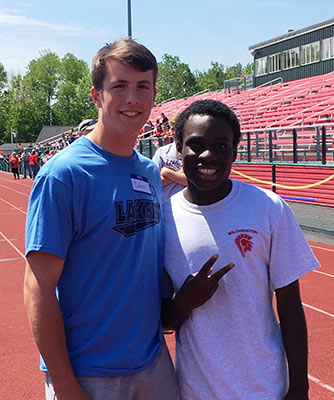 Cortney: What kind of events do the student-athletes compete in at the Special Olympics?

Goold: Well, the field day which we just had at Strider’s Field is run like a track meet. So we have running events: 50 meter, 100 meter, 400 meter, and then relays. We also have some field events, which are the standing broad jump, running long jump, and then the softball throw. So they get to do a wide variety of activities.

Most of these kids just do that track and field day. But Special Olympics does have other events throughout the year: in our south end of the county we have a softball program and a golf program, and in the north end of the county they have some swimming and basketball. But those sports tend to be more for the adults; they aren’t necessarily school-based, like our day at Strider’s Field.

Cortney: How many students competed at this year’s Special Olympics?

Goold: We had about 400 students at our meet at Strider’s [last] Tuesday. Then Wednesday, at Fredonia State, will be the North County Special Olympics. They’ll have about 300-some students participating. We used to do Special Olympics for the whole county all together, but it just got too big.

We also had about 150 volunteers on Tuesday, which we couldn’t do without. They came from the high schools in Frewsburg, Maple Grove, Jamestown, Falconer, Southwestern, Panama, and Chautauqua Lake. Those kids are the ones who really make it run. The whole day is dependent upon volunteers, so those high schoolers are the ones who make it happen. 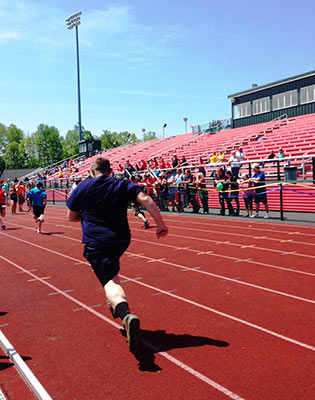 Cortney: Why is it so important to provide opportunities like the Special Olympics?

Goold: I look at it as a two-way street. It’s important for the Special Olympic athletes to have what we call their “day in the sun.” A lot of them don’t participate in any other activities – some do – but for most, this is their day to be on center stage. Their parents come to cheer them on, the volunteers cheer them on, and kids from other schools cheer them on.

It’s definitely a two-way street, though, because the high school volunteers get to see those kids in a different light, too. The Special Olympic kids have a great day, but I have to tell you, the smiles and feelings of the volunteers are just as good as the athletes’. It’s definitely a give and take, and I think the volunteers take a lot away from the day. That’s how I got hooked – I was a volunteer way back in the ’70s when I was at Maple Grove. It opened a door for me to see those people in a different light and I’ve had a great affection for them ever since.

Cortney: Do you have a favorite part of the Special Olympics?

Goold: It’s been such a big part of my life and opened a lot of doors for me to meet people, but the best part is just seeing the Special Olympic athletes compete, seeing the smiles on their faces. For them, it’s not whether they win or lose. They just want to try their best. They want a chance to show that they can do something and do it well. And when they get their ribbons, they’re so proud. In that moment, there’s no difference between them and a kid winning at a sectional track meet. I love to see kids get that opportunity. 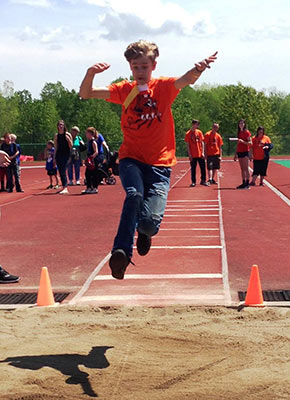