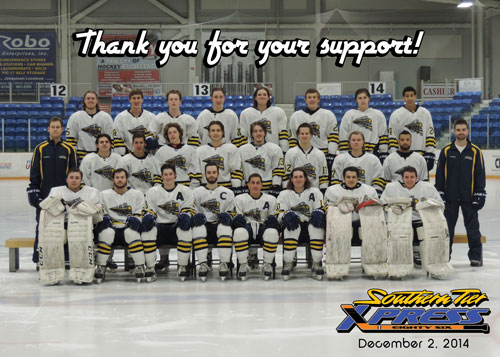 The Southern Tier Xpress junior hockey squad, in the second week of January, is on track to top the North American Tier 3 Hockey League (NA3HL) in attendance in only its first season on the ice, according to Brian Cersosimo, General Manager of the Jamestown Savings Bank Ice Arena. Mid January also landed the Xpress in a 3-way tie for second place near the top of the league’s hotly contested Eastern Division.

A recent Sunday game drew more than 1,300 people to the ice arena. “We are out-drawing the Mason City North Iowa Bulls right now. They were 2013 league champions and 2014 runners-up,” Brian said. Mason City, Iowa, is almost Jamestown’s exact twin in business and population.

“We’ve already nearly doubled the attendance records of Jamestown’s previous hockey team, the Ironmen. That’s because our players have made themselves a real part of the community,” Brian recently told a fan at the arena. The Southern Tier Xpress regular season ends at the end of February with about 14 games remaining to be played between mid January and the end of the season. If all goes as planned, the season could extend into March with the Xpress competing in the league championship playoffs.

Community Wins Games
“The community has been fantastically supportive, and that’s made a huge difference,” Brian said, speaking for himself and the other 12 local community members who make up the Xpress’s ownership team. “The community has really showed up for us,” Brian added. “We even have fans that show up for games in great costumes, and others that bring lighted “Go Express!” signs right into the stands.

Southern Tier Xpress fans now have one more opportunity to support the team in a way that will bring the national spotlight back to Jamestown and prove once again Mayor Sam Teresi’s recently publicized claim, “This is the best small city on the planet.”

Big Dollar Scoring Opportunity
Kraft Foods has just announced a nationwide competition that could deliver a National Hockey League pre-season game to Jamestown and top it off with $150,000 in prize money for ice arena upgrades and improvements. Content rules for fans are posted on www.krafthockeyviolle.com.  “Nothing surprises me when something good happens in Jamestown, that’s just the way it is here,” Brian Cersosimo said. “This is just one more opportunity we can make the most of.”

Lee Harkness, stationmaster at Jamestown’s Gateway Train Station and staunch supporter and friend of the Southern Tier Xpress, said, “Let’s everyone jump on board… the results could be spectacular. I think this is a terrific opportunity. This is doable—kind of like the Fireball Run—we did it!” Lucy fans who brought home a Guinness World Record to Jamestown in 2014 might also agree with Lee Harkness.

The Kraft Hockeyville contest allows fans of their hometown and their hockey arena to post their nomination on the Kraft Hockeyville website for all to read, nationwide. A submission includes a brief essay that tells everyone why hockey is so important to our community, and (optional) allows adding a title and up to three photographs. These, the rest of the simple rules and a submission site, are all available at www.krafthockeyville.com . Nominations are open between January 1 and March 18, 2015 followed by judging and voting through April 29, with the final winner announced on or about the beginning of May, 2015.

Why Jamestown?
The JSB Ice Arena has hosted many of the world’s best Olympic, national and world champion ice skaters who have returned over and over because word of mouth among the best of the best says that Jamestown has some of the “best ice” anywhere.

But, according to JSB Ice Arena GM, Brian Cersosimo and the Southern Tier Xpress ownership team, the best ice in the world is good for even more than just skating on.

“We are here to create a positive impact on 25 players in a way that will affect their behavior for the rest of their lives, whether in hockey or in anything else they do,” Brian explained. When an ice arena can build character as well as great teams, then it can really be called a success. “Our ownership,” Brian added, “is truly committed to the team, the whole community and the people who are making this a success.”

“We have certain goals for the young men who play on our team. We want them to be active in the community, we want our games to be affordable and we want to create a new and better impression of hockey players and their behavior in the community,” Brian promised.

“We pick our players for the locker room and it shows on the ice. It’s not always the most talented player who is most successful, but the player who gets along with the other players and makes himself part of the team. Those are the same qualities that build a good community.”

More than Hockey
The success of the Jamestown Savings Bank Ice Arena is due to more than hockey. Brian also explained that The Ice Arena Board of Directors has 11 members and the Southern Tier Xpress ownership board has 13 members. Two members are on both boards, “…so we all talk to each other about matters of mutual concern. We are mutually supportive in ways that we keep on inventing. Cooperation trumps competition here.”

The broader aim of the Ice Arena includes recreational skating for all ages of boys and girls and adults and lessons and competitions in figure skating, ice dancing and anything else than can be done for fun on the ice. Even non-skating events like concerts and comedy performances make the Jamestown Savings Bank Ice Arena an outstanding competitor.

A Final Note from Kraft
A note to one of the Jamestown Xpress fans who recently voted for the JSB Ice arena said, “Thanks for registering for Kraft Hockeyville! Remember hockey is all about community. Tell everyone you know to share their love of hockey, and upload their stories to our page! The more support you get, the better your community’s chances of winning $150,000 in rink upgrades! Plus, the chance to host a NHL® Pre-Season Game.