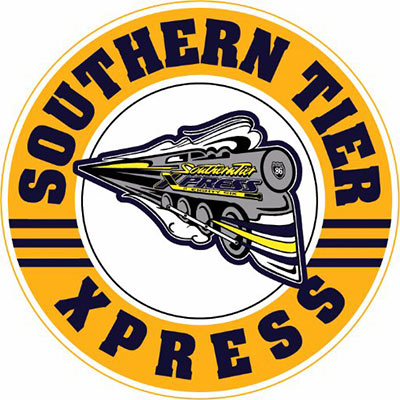 The Southern Tier Xpress, Jamestown’s NA3HL ice hockey team, has charged into their season against some tough competition. At the time of press, their record stood at three wins and eight losses, with a long season ahead to improve and compete. Head coach Brian Ramm sat down with The Jamestown Gazette to talk about his coaching style, this year’s draft and trade strategies, and what it’s like to train a young team that’s brimming with potential.

Cortney: Let’s jump right in. How would you describe your coaching style?

Coach Ramm: I’m a direct coach, you know, I like discipline, I like hard work. I like players who are here for the right reasons, hockey being the first. I wouldn’t say I’m hard-nosed, but I’m fair and I’m honest with the players.

Cortney: Okay, let’s go back to the beginning of the season. What were you looking for in your draft picks this year?

Ramm: With the draft picks we were trying to add size, speed, and trying to increase our goal scoring opportunities. We were also trying to secure our back end, starting with the goaltending and then with our defense as well.

Cortney: With player trading every year and seven rookies on the team this season, your roster is in a constant state of flux. How do you manage to keep the team cohesive?

Ramm: This year we have two of our draft picks on the team. We also have another process in this league called tendering, where you’re able to remove a player from the draft by tendering an offer to play on the team. So we have four tenders too. Last year, we made a lot of trades and changes to the team, but this year we tried to secure the veterans who were coming back, some good rookies, and a few older kids as well, just to round out the roster. We wanted a good balance between youth and age.

We also decided that this year, we’re not looking to trade and move players. We wanted to make sure that the kids coming here knew they were coming to stay. If it’s a situation where a player needs a fresh start, we obviously want to help get him somewhere else. But we really want to keep the roster as secure as possible. We had to develop a culture so that the new players coming in could just fall in with the team without all this rebuilding. So that’s something we spent a lot of time working on in the off-season, and it’s all starting to come through now.

Cortney: What would you say is the biggest strength of your team this season?

Ramm: Speed. We are faster than we were last year, and watching us against the other teams, we’re faster. With a young team, it takes a little bit of time for them to learn how to compete and win. That’s what the kids are learning right now in these early-season battles, when you have games where you might make a mistake and lose by a goal. You’ve got to be patient with the boys and let them grow into it.

Cortney: On October 14, you guys blew out the Wooster Oilers, 10-4. The next night, they came back and edged you out, 3-2. How do you account for such inconsistencies in the game, and how do you try to correct it?

Ramm: Well, it goes back to what I was saying about having a young team. You have to point out to them that look, a good team will win 10-4, but a really good team can come back the next night and grind out another victory. Preparing yourself to play two games in a row is something that the younger players, and even sometimes the veterans, need to learn how to do. Looking back, that’s one of the games that we as a coaching staff feel we should’ve had. We were pretty disappointed with that.

Cortney: You guys are currently ranked fifth out of six teams in the East Division, but you’ve got a long season ahead to move up the ranks. What are you looking to focus on and improve in the remaining months?

Ramm: We actually had a long discussion with the boys this weekend about this – we talked to them about where we thought their game was and what needed to change. We told them, every night’s a battle, and it doesn’t matter who it’s against: you have to go in, you have to be prepared, and you have to perform. Some of the things that we’re working to change are not taking things for granted, like with the Wooster situation, and playing at our speed instead of other teams’ speeds. There’s no panic button in the locker room right now. Everybody knows what we’re fully capable of. We’ve beaten and lost to three teams that we’ve played against, so I think we’ve shown that we can play with anybody. It’s just a matter of showing up night in and night out and being prepared to play.

Cortney: A lot of your boys have hopes to go on and play hockey in the NAHL, USHL, NCAA, etc., and in fact a few have already committed to colleges. (Luke Grossman committed to Slippery Rock University and Philip Grippi to Adrian College.) But the reality is that not everyone will go on to play hockey after this. How do you prepare players for life after the Xpress, acknowledging that it may not include being drafted?

Ramm: This goes back to when you asked me what kind of coach I am. I talked about being fair and honest and expecting hard work and preparation. Those, I think, are the lessons that the game of hockey teaches you. It’s the most honest game there is; you can’t cheat it. It’s hard work all the time – you have to punch your card, go to work, and when the buzzer blows, it’s over. Well, that’s no different than life. Life’s going to beat you up and knock you down, but you’ve got to get back up and sometimes you’ve got to fight. You might win, you might lose. Once you learn to deal with all of that, then you’re going to be successful.

Catch the Southern Tier Xpress at their next home game on Friday, November 18 at 7:00pm. The theme will be “Mustache Night.”