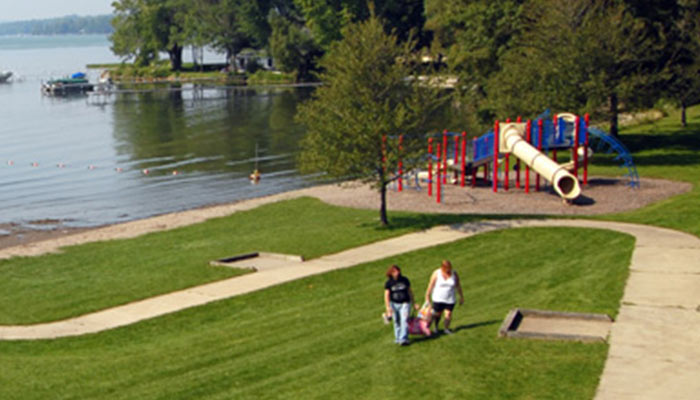 A cool breeze stirs the sticky air, sunlight sparkles off steely blue water, and boats zip past with a hum. What better place to enjoy the remaining days of summer than Chautauqua Lake?

In addition to providing a scenic view, Chautauqua Lake functions as a driving force behind the county’s economy: local businesses and attractions thrive along its shores. Many towns border the lake, and a walk along any part of the 40-mile shoreline will reveal a wealth of small shops and eateries offering regional services, products and food. Though some establishments are seasonal, the friendly faces remain all year round.

Many lakes experience algae issues once the thermometer spikes, but “the Chautauqua Lake water quality has been good this summer,” John Jablonski said. Jablonski, Executive Director of the Chautauqua Watershed Conservancy, says that several factors contribute to the lake’s current clarity.

“Less phosphorus is available in the lake than in previous years,” he said. Though phosphorus is essential to plant life, large concentrations in a body of water— often due to agricultural and municipal runoff — can contribute to excessive algae growth.

“Two of the positive actions taken are the Chautauqua Utility District Water Plant’s phosphorus treatment and the North Chautauqua Lake Sewer District’s system to improve phosphorus removal,” Jablonski added. “Additionally, an invasive nuisance proves helpful when it comes to algae management in Lake Chautauqua. “An abundance of zebra mussels [this year] filter algae out of lake and consume it, resulting in cleaner water.”

Located 1,308 feet above sea level, Lake Chautauqua is one of the highest navigable bodies of water in North America. Long Point, the peninsula-like land mass that juts into Lake Chautauqua, was created nearly 10,000 years ago when the glacier covering Western New York receded, leaving behind ridges of sediment called moraines.

One of these moraines functions as the 360-acre day-use facility now known as Long Point State Park. “Long Point is a hidden gem on Chautauqua Lake,” Marla Connelly said.

A Wild Park History
John Thompson, the first owner of Long Point, bought the property from the Holland Land Company in 1809. Thompson and subsequent owners used the land for farming and recreational hunting and fishing until the Civil War.

“Long Point became a picnic destination in the mid-1800s. The grounds were first serviced by steamship and later by train and trolley,” Connelly said. Around 1880 it became a full-fledged amusement park, and in 1887 a new attraction, a zoo, drew huge crowds.

The zoo’s exotic animals — lions, bear cubs, a leopard, a camel, a tiger and an elephant — were not caged, but instead chained to free-standing posts. Legend has it that the huge elephant broke away one day, and thundered toward Jamestown, dragging his chains and stirring up clouds of dust. He eventually stopped to bathe in the lake, where he was recaptured. Unsurprisingly, the zoo only lasted one season at Long Point.

Frank Gifford, son-in-law of Governor Rueben E. Fenton, stepped in after the 1887 season and purchased the land to use as a private estate.

“Gifford, President of the First National Bank in Jamestown, commuted to work daily from Long Point in the early 1900s on his yacht, which was the fastest and largest on the lake at the time. After he died in 1934, his daughter Cecile had it sunk in deep water above the point,” Connelly said.

Cecile deeded the land to New York State for park development in 1954. “Long Point became a State Park in 1968. There were several [additional] estates that were donated and acquired to create the park,” Connelly said.

Connelly received two undergraduate degrees — Recreation Management and Natural Resources — and an M.B.A. “Working in Parks is what I trained to do. My title is Park Manager 2: [I’m] responsible for all Park properties in Chautauqua County,” Connelly said. She can be found on the grounds of Long Point, Sunset, Lake Erie and Barcelona Harbor State Park properties.

Ready, Set, Sail
The Long Point State Park boasts the most modern boat launch along Chautauqua Lake. Many boats bob along the marina’s docks all summer, and fishermen and boaters alike congregate near the docks. Bass and perch proliferate in the waters of Lake Chautauqua, making Long Point ideal for a family fishing outing.

Fishermen seeking a challenge, however, come to Long Point for the fish it’s locally known for: muskellunge. These fish, the largest members of the pike family, are relatively uncommon. The aggressive toothy beasts grow to over three feet long. Musky, or muskie, — this fish’s nicknames are deceptively cute — appeal to skilled fishermen because of the impressive vigor that goes into their twisting, biting fight against the bait.

Ready About Sailing has a location right near the boat launch. It is open from early morning to 7 p.m. every day. “[We were] founded in 2001 based upon a mission to ‘make life better for Chautauqua Lake sailors,’” Greg Swan, president, said.

The establishment offers restaurant-quality food, snacks, gas, beach necessities and more. Lake-lovers can experience the thrill of boating firsthand with the help of Ready About’s paddleboard, kayak and sailboat rentals. Chase Gregory, resident skipper, takes inexperienced sailors out in the sailboat, but all are welcome to go for unaccompanied paddles in the kayaks or on paddleboards.

“I received my degree in Elementary Education, [but] I felt that working for Parks was a better fit,” he said. After completing the civil service exams, Ennis started out as a Ranger near Hudson Valley, and currently holds the title of Park Manager 1 at Long Point.

Long Point, like any State Park, strives to preserve areas of natural beauty. “It is very rare that a mess is left behind, or that there are any instances of vandalism,” Ennis said. Perhaps this is due, in part, to the proximity of local law enforcement. “Long Point is also the home base of the marine unit of the Chautauqua County Sheriff on the lake,” Connelly added.

The Chautauqua Lake Association’s Watercraft Steward Program conducts voluntary boat inspections at many marinas along the lake in an effort to keep invasive species at bay. Over 200 were inspected at the Long Point marina and boat launch.

Various nature programs take place at Long Point; the last one of the season, ‘Going Batty’ will be held on August 13. “The talk will discuss bats and their vital role in the ecology of Chautauqua Lake,” Connelly said.

Just Beachy
Long Point’s beach has a roped-off area for swimming. Lifeguards are on duty Thursday through Sunday from noon to 6 p.m. “The beach was overhauled this year with a large nourishment of sand to create a sandy beach,” Connelly said, citing another improvement to the park.

Trees dot the grassy area surrounding the swimming area to provide shade for those in need of respite from the sun.

Connie Greenland, her swimsuit-clad grandchildren and their friends, relaxed by the water while munching on homemade popcorn. The group made the short trip to Long Point for a variety of reasons. “I’ve been coming here for years. We’ve had a lot of family reunions here,” Greenland said. Numerous picnic tables and pavilions provide ample space for reunions, graduations, parties or lunches.

Greenland and her grandchildren enjoyed the beach and the peaceful solitude Long Point offers their visitors. “It’s not too busy, so you can get away from everyone,” Sadie, who attends Jamestown High School, said. Max and Taylor nodded in agreement.

When asked about her favorite aspect of the beach, the younger Mickia had an answer ready. “You can see right through the water,” she announced, bouncing on the balls of her bare feet. Olivia was too busy capering around the beachside playground to comment.

[More Than A] Hundred Acre Woods
“Many people are surprised at the size and depth of Long Point and don’t realize the miles of trails available to wander in the 360 acre park. Very little of the park is actually touched by roadway,” Connelly said. More than seven miles of marked hiking and biking trails — along with other unmarked trails for the adventurous — wind thorough Long Point, the densely wooded areas left as close to their natural state as possible.

“Along those trails is the wildlife; come watch a doe with her twins in early summer, see a hawk circling above, observing the waddle-scurry of a wood chuck once he sees you. What you see and hear is different every time,” she said.

A drive into the park provided a small taste of the verdant foliage of Long Point. Thriving trees border the newly-paved road, and two fawns romped in the fresh grass, but eventually skittered away at the car approached.

Maple, beech, spruce, poplar and oak intertwine to form a canopy above the trails. Light filters through the leaves, providing the perfect mix of shade and sun for a hot summer day. Trails are open year-round for hikers, bikers and cross-country skiers.

No matter the weather, the forest provides a place to explore the outdoors and discover nature. “The park is home to the state’s tallest cucumber magnolia tree: over 115 feet tall,” Connelly said. Budding botanists can attempt to locate this tree by searching for its alternate large yellowish-green elliptical-shaped leaves.

“The scenery here is what it’s all about. You can walk all the way out to the point. You can see all kinds of wildlife. We have turkey buzzards, herons, deer, and lots more,” Rachel Ernewein agreed. Ernwein works at Ready About Sailing.

Something for Everyone at Any Time
“We have a healthy visiting patron population that contributes tax dollars to local towns and shops, particularly in Bemus Point,” Ennis said. Long Point has a sand volleyball court only yards from the lake, multiple well-kept playgrounds, showers, grills, and all sorts of opportunities to explore nature by foot, bike or boat.

Cross country skiing, snowmobiling and ice fishing are popular winter sports in Chautauqua County. “We serve as an easy access point with heated facilities in the wintertime for ice fishing, which helps bring tourist dollars to the area,” Ennis said.

Long Point inspires admirable loyalty in locals. “They’d have to force me not to come back,” Ernewein concluded.

Make the Trip
Be sure to bring the whole family — pets too! — to Long Point State Park this summer. There is a $6 vehicle fee on non-swim days (Monday through Wednesday), and a $7 fee on swim days, but the park is free for those who walk or bike in. The park is located at 4459 Route 430 in Ellery, west of Bemus Point off Route 17. Call 716-386-2722 for more information.

Soon school will be back in session, but for now Long Point and the rest of Chautauqua Lake beckon.