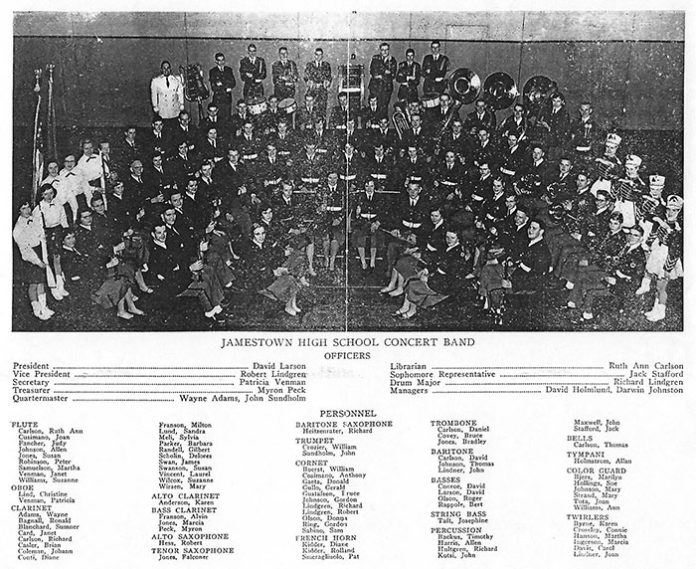 September in the city brought the anticipation of a new school year. Labor Day signaled the end of summer but also the beginning of our “labors” as we gathered new pencil boxes, pens, pencils, large pink erasers, 3-ring notebooks, and assignment pads—all of the materials that would once again turn us into students whether we were in grade school, junior high, or, at last, in Jamestown’s one and only high school located on E. Second Street: JHS.

Being a native Jamestonian, I attended Jamestown’s public schools. My first day in kindergarten was at R.R. Rogers School on Sherman Street, and my teachers were Mrs. Ashford, who had taught youngsters for many years, and the younger Mrs. Anderson. I went to school for half a day, beginning in the afternoon session in the fall and then changing to the morning session after our Christmas recess. I have to admit that it took me a day or two to adjust to school life, but once I did I loved all of the activities that we participated in from doing interlocking puzzles to drawing to stringing beads before the bell rang to announce the formal start of the school day. What did we do in that large, spacious, well-lit room? We learned letters and numbers, drawing free hand, singing, becoming independent learners, and playing house, enjoying the sliding board that was central to the room, building with large blocks, and painting at several easels. We even had a “nap” mid-session, lying on rugs, listening to Brahm’s Lullaby on a record placed on a wind-up Victrola!

However, real academics started in first grade, which were full-day classes, with the introduction of reading and writing (printing) and arithmetic. I had a fairly long walk from Derby Street to Sherman Street, and my mother usually walked me to and from school. The only students who were bussed to Rogers School were those children who lived in outlying districts, many living on dairy farms; the rest of us walked in all kinds of weather! At some point, when I had safely learned my way to school, my walk included a group of children from Derby as well as Harrison Street and Brooklyn Square apartment dwellers. We always passed by a small house on the corner of Allen and Sherman that was set back from the sidewalk that had a huge chestnut tree on its front lawn. Fall brought the chestnuts down, rolling under our feet. These were treasures in shiny brown skins, smooth and round to the touch, that ended up in our bulging pockets! They weren’t edible, at least by humans, but I think we were fascinated by the bounty and beauty of them. And they were there for the taking!

Grade school took us straight through sixth grade, and in those years, in addition to academic subjects, I learned to read and play music, took part in an all-school operetta, and was in a few school plays. The next academic step was a big one, and I began the long trek to Jefferson Junior High School located at the top of the long and steep Camp Street hill. I lived the furthest away on Derby, so my walk took me along Allen Street, where I picked up two of my friends who were cousins, and then another friend who lived at the corner of Allen and Maple. For three years through grades seven to nine, we four shared our journey and some times intercepted my excellent eighth grade English teacher, Miss Ellen Johnson, who lived on Shady Lane. Half way up Camp Street hill, she would laugh and inevitably say, “Okay, girls. We have to put it in second gear!” That took us the rest of the way!

I liked my junior high years, both academics and extra-curricular activities. I was on the staff of the school paper under the direction of Anne Kelley and also became a member of the Jefferson band because I had started to take flute lessons from Harold Skinner in seventh grade, first in a group and then privately. The first time I was confronted with playing a march was a challenge–6/8 time, so many notes, so many key changes, such a fast tempo! I recall the band director, Charles Jacobson, standing behind me and pointing at the notes with his baton the first time around! I did get into the swing of things, literally, and by the time I left Jefferson Junior High, I was prepared to become a member of the Jamestown Red Raiders High School band. This was something I had anticipated for years once I had become a musician.

Because of the close proximity of my home at 17 Derby to JHS, I could hear the music when the marching band was practicing on the football field for their half time show. How I envied them. But come the summer of 1955, when we junior high musicians were being prepped for the high school band during a few weeks before school formally began, I was handed a piccolo by Mr. Jacobson and told that this was the instrument I would play in marching band, but resume playing the flute in concert band. So okay! I could barely get a note out of it for the first few times I held this small but powerful instrument to my lips, but through practicing every day—to the dread (I’m sure!) of my neighbors–I finally mastered it. I say powerful because every now and then a composer would write a solo interlude for the piccolo (think Sousa’s “Stars and Stripes Forever”), but also because this tiny, bright instrument would add highlights, embellishments, and trills to an ordinary piece of music. I played in the marching band, concert band, and the select concert band for the three years I was at JHS. I liked being part of large musical organization and still have fond memories of the camaraderie that we shared during those years.

So my walking to high school turned into marching and eventually that final walk to the stage, after playing in a flute trio for our 1958 graduation ceremony, to receive my high school diploma. My next walk was the shortest in my Jamestown academic history, only a few blocks from home, because I attended Jamestown Community College at the corner of Foote and Allen in the Goodwill mansion for two years earning an A.A. degree in 1960 before transferring to Harpur College to graduate in 1962 with a B.A. in British Literature. To this day and all those walks later, I think I received a really fine education in the city’s schools.