During the summer of 2013, the Vision Committee of the Rotary Club of Jamestown voted to fund a micro-finance project for women in Nepal in order to promote a self-sustained lifestyle by weaving mats and other household goods from indigenous natural fibers. With the partnership of the members of the Jawalakel Rotary Club in Kathmandu, the Rotary Club of Jamestown agreed to fund the three-year project at a cost of $1,600 per year. The funding for the first year was forwarded to the Rotary Club in Kathmandu this past fall and the project began to identify the participants with the help of the local agency WEAN (Women’s Entrepreneurial Agency of Nepal).

Currently in its beginning stages, there are 25 women involved as recipient of this project at Kusaha, a village in Koshi Tappu, Sunsari district. They are all landless women who have demonstrated skills in weaving and a desire to learn more about mat making and be successful in their own business. As part of this project, they have created a cooperative called “Koshi Tappu Wetland Multipurpose Cooperative Ltd” (KTWMC). Recognizing their indigenous skill, Nepal Knotcraft Centre P Ltd (NKC) in partnership with the Rotary Club, has provided them with “Skill Upgrading Training”. This training has resulted in good quality mats which can be sold in Kathmandu, the capital city of Nepal.

During the marketing of these mats, it was discovered that almost all of the women had, in the past, taken personal loans from a local source to sustain their domestic living expenses and the interest was 30%. If they are late by even some hours to pay back the monthly interest of the loan amount, they are charged additional penalties. Because of this, many women are terrified of the penalty, and are unable to secure adequate funding to acquire materials to increase production of their improved good quality mats in larger quantities. Whenever they needed money, they have been forced to sell the mats cheaply at the local markets in order to satisfy the loans.

With the donation from the Rotary Club of Jamestown in Chautauqua County, New York, a provision was made to remit a $500 check to the new co-op as an advance for raw materials and basic equipment for the women’s cooperative. Some of the loan amount is being used for partial payments of the products as soon as the mats are delivered to the Nepal Knotcraft Centre P Ltd (NKC), the marketing partner for retail sales for these women’s products. The loan provided by the Rotary Club of Jamestown is for business production only, however, the purchase guarantee has also helped the women in their personal loans.

At this time, the project is a cottage level enterprise and a portion of the loan given to the cooperative by the Rotary Club of Jamestown has also helped the new co-op as a deposit to create a limited bank account which can serve the costs associated with better production, marketing and involving more women in the co-op. At present, the women have begun to concentrate on production weaving and the mats are being sent to Kathmandu regularly.

The Rotary Club of Jamestown holds two fundraisers each year – the Annual July Golf Tournament, held the second Monday of July at Moon Brook Country Club and their February Charity Ball. Sixty percent of the earnings from the fundraisers supports local projects and 40% supports international projects such as the one described.

The Rotary Club of Jamestown is Looking for Young Leaders 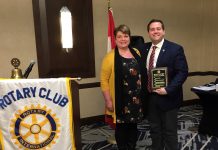