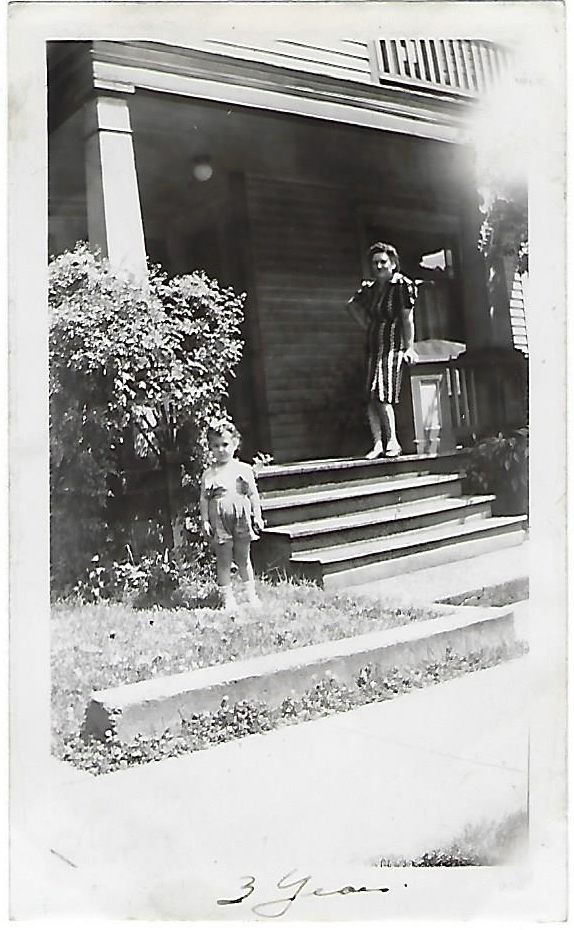 Nothing could bring out the neighbors at our end of Derby Street like warm summer nights. By July, the city heat had found its way to second floor apartments in two-story houses that lined the block, and by night fall we often sought relief, hoping to catch a breeze, by gathering on porches that graced practically every house in the old neighborhood. Often neighbors who had lived on Derby for years and who knew each other’s families from children to grandparents would call softly back and forth to one another, commiserating about the heat, exchanging small bits of talk, or silently acknowledging the companionship that had grown up over the years of a close-knit, mostly Mediterranean neighborhood.

The house that I lived in at 17 Derby had a sun porch or sun parlor, as we called it, that was lined with French windows that opened out, thus providing cross-ventilation with the upper story front porch. Underneath that room was an open first story porch that provided some air circulation, thus making the sun parlor a good place for two kids to sleep on hot summer nights. But often we would sit on our front steps or the low cement wall that encircled most of the front and side lawn. It was as if we had extended an invitation to our next-door neighbors, the Crastis, or those across the street, the Galatis or Hennases, to come to that more public place and sit with us.

Being a child, I mostly sat and listened to the grown-ups talk, watching the patterns the street lamp made on the street, swaying when we had a bit of wind. My mother, who was born in 1911 and who was a little girl during WW I, recalled almost the same scene from her childhood as she sat and her family talked of the Great War. She said it had frightened her. By the end of the summer in 1945, WW II had come to an end with the surrender of Japan, but neighbors still talked of the war because people were still fearful of the Fifth Column. It was many years later that I understood that fear and why, when the tornado that struck Brooklyn Square and the corner of Derby where we lived on June 10, 1945, that some of our neighbors said, when they recalled the roar of the winds, that they thought the Germans were coming—knowing that Germany had surrendered only a short month before on May 8, 1945.

One night I recall that a small group of us started slowly walking toward the corner of Derby and S. Main, making the left turn onto Allen until we came to Clayton’s Ice Cream parlor on the corner of Foote and Allen. That occasioned a single scoop cone all around for the cost of a nickel a dip! And some times coffee was put on, usually by Ang Galati or Eva Hennas, that was served on the back porch of the duplex house at 10-12 Derby, accompanied by some bread or cheese or cookies. Why eating on a porch always appealed to me, I don’t know! Maybe it was just the thought of eating in the open that made it feel like a picnic, something we all enjoyed and occasionally shared in as neighbors when we would walk to Allen Park to cook and eat under the pavilion or one of the many picnic tables placed away from the swings, teeter-totters, merry-go-rounds, and sliding boards. Some times, when I was a pre-schooler, my mother would “pack a lunch” for me and put it in a shiny tin lunch box that was oval and painted on the outside with a picture of a stream-lined train—maybe a ham and mustard sandwich and a banana—that I’d eat on the front porch overlooking the neighborhood on a warm summer’s day.

And it was several years later on another warm summer’s day when I was still in grade school, maybe fifth or sixth grade, that I thought it would be neat to “host” a cook-out and build a make-shift cooking pit from some of the bricks that had been thrown among the tornado rubble behind Bill Morse’s Sunoco gas station, a few yards from our house. It was known as “the Jungle” by the boys in the neighborhood, and I methodically noted on paper the location of the bricks I needed and began to collect them maybe with the help of my friend Carol. We fashioned a fairly large grill pit and then found all kinds of odd and ends of wood and dry branches of trees to use as firewood that we arranged at the bottom of the pit. All of this took place in a small area at the Hennas side of the duplex house near an old cement car lift that had been abandoned by the owner of the corner Mobil gas station.

Night fell and we proceeded to light the firewood until we had a pretty good blaze going. As I recall, we begged some potatoes from our mothers and pitched them straight into the glowing coals that had begun to form. By that time, the grown-ups began to gather and brought with them hotdogs and buns and maybe some soft drinks. So we sat as neighbors, digging and spearing charred potatoes out of the coals that we carefully peeled and ate with a shake of salt, maybe eating a bit of ”charcoaled” bits along with the soft flesh of the roasted potato. And hot dogs, stuck on a split branch, were as equally charred, bursting at their sides from the heat, running juices into the coals, and eaten straight off the stick. When I remember that night, probably in 1949 or 1950, I still marvel at the spontaneity of it—and the fact that I was a kid who “planned” it all from scratch! The talk that night wasn’t about war, but, as I recall, about the experiences that many of my immigrant neighbors from Sicily, Italy, and Greece could tell first hand—about their voyage across the Atlantic, their childhoods growing up in countries that I only knew from a map, about their struggle with the English language and how a mispronounced word or a mistaken interpretation of a phrase or idiom would result in a hilarious incident that they could laugh at after years of living in America.

The conversation that night was rich with cultures that had found their way to the New World. That time was long ago, but I’m still touched by the closeness of those people, neighbors that anyone would want in their lives.