While America was celebrating its birthday on July 4, 1819, George Washington Fenton and his wife Elsey Owens Fenton were celebrating the birth of their fifth son, Reuben Eaton Fenton, a name well established in the history of Jamestown and New York State.

Reuben, whose father was a farmer and school teacher, was born in the village of Carroll, NY and was educated in the district school, Cary’s Academy near Cincinnati, Ohio, and Fredonia Academy, the only institution of higher learning in western New York State. In 1840 Colonel Reuben E. Fenton was named commander of the New York Militia’s 162nd Infantry Regiment. In 1841, after studying law, he was admitted to the bar; he also entered politics as a Democrat. From March 1853 to March 1855, he served as the New York member of the House of Representatives in the 33rd United States Congress. After his defeat to re-election in 1855, he helped organize the Republican Party. As a Republican, Fenton was a House member from 1857 to 1865 (the 35th to 38th Congresses) and served on the Committee on Invalid Pensions and the Committee on Claims.

Reuben E. Fenton was elected governor of New York, serving two terms from January 1, 1865 to December 31, 1868. As New York’s governor, Fenton worked to facilitate benefits for disabled Civil War soldiers during his tenure, advocating for “payments of bounties and arrears of pay due to wounded and deceased soldiers” and making discharges from the service easy for the disabled. In addition, Gov. Fenton learned the veterans’ great respect by visiting the wounded and providing free postage for their letters to family. By easing the burden on these veterans of war, Gov. Fenton became known as “The Soldiers’ Friend.” On March 4,1869, Reuben Fenton furthered his political career by becoming a U.S. Senator from New York serving to March 3,1875. He worked to remove tuition for public education, helped establish schools for training teachers, and signed the charter for Cornell University.

Reuben Eaton Fenton died in 1885 at the age of 66 and is memorialized in a statue that stands in front of the Fenton mansion on his Jamestown estate, originally known as Walnut Grove, that was built for the family circa 1863 in the style of an Italian villa. It overlooks Brooklyn Square and is one of only two original buildings, Donelson Moving & Storage (now Duke) being the other, that survived the forces of urban renewal. In its history, the mansion was the “last national office of the Grand Army of the Republic (G.A.R.) which served Civil War veterans.” In 1919, the city purchased the Fenton estate to serve as a soldier and sailor memorial. The mansion was host to various patriotic organizations such as the American Legion Ira Lou Spring Post #149, Disabled American War Vets Illig Post #47, and Catholic Veterans Post #1658. It was also the home of the US Selective Service Board. It is interesting to note that the first Jamestown armory was built in 1892 just north of the Fenton mansion at 40 S. Main Street, a fitting location for the home of the Thirteenth Regiment known as the Fenton Guards, so named in honor of Reuben E. Fenton.

Reuben Eaton Fenton’s first wife was Jane W. Frew, who was the mother of Jane Frew Fenton. A few years after her death, Fenton married Elizabeth Scudder; together they were the parents of Josephine Fenton, Jeannette Fenton, and Reuben Earle Fenton, his only son, who married Lillian Mai Hayden. On his death bed at the age of 29, Reuben Earle Fenton had only one request for his wife—that she provide in her will a statue in memory of his father, Reuben Eaton Fenton. On July 4, 1934, the 115th anniversary of Reuben Eaton Fenton’s birth, the bronze statue of Governor Fenton, Jamestown’s outstanding resident, was dedicated with impressive ceremonies by the state historian, Dr. Alexander C. Flick of Albany, who expressed the Empire State’s official tribute and gratitude to one of our city’s most illustrious citizens. In addition to the local and state dignitaries who shared the dedication of the statue was Percy Bryant Baker, renowned New York sculptor, who was commissioned to execute the statue of Governor Fenton. In his speech, Baker said, “’It is my earnest hope that I have made for you and future generations a faithful likeness and character study of Governor Fenton, the man who contributed much to the history of his time.’”

Now known as the Fenton History and Museum Center, the Fenton mansion was placed on the National Register of Historic Places in 1972. In addition, Fenton Hall at SUNY-Fredonia is named for him as well as Fenton Avenue in the Bronx. 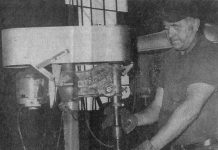 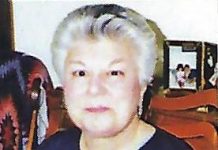 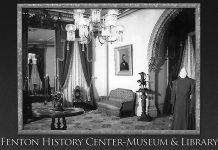