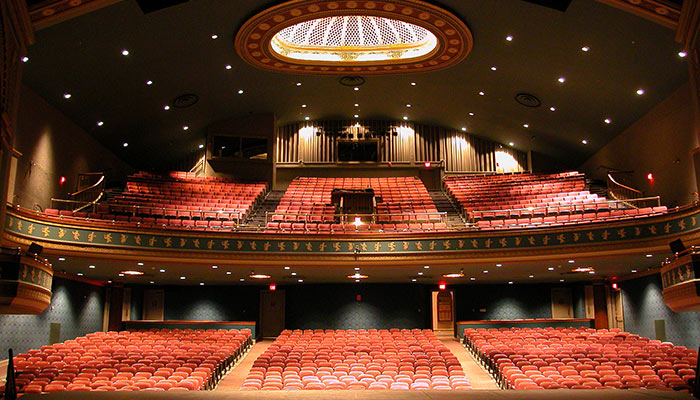 Since the Reg Lenna Center for The Arts is a long-time staple of the Jamestown art and culture scene, the staff of the Reg, as it is affectionately called, tries to preserve the original vibe of the place. “The things we do in the theater now are very similar to what was done in the theater originally: a mix of live performances and movies,” Len Barry, Director of Marketing and Communications, said.

Barry, who graduated with a master’s degree in Theater Fine Arts, fell in love with the peaceful atmosphere of Jamestown, his wife’s hometown, when they visited from Florida, where they both worked at the time.

The Reg “was built in 1923. She used to be known as the Palace Theater, and did vaudeville, but quickly switched over to movies,” Kathleen Eads, Executive Director, said about the theater’s history. Eads, who hails from Los Angeles and holds an art administration degree, said, “the first two winters [in Jamestown] were bad!”

In the 1980s, “when the theater was falling apart, Harry Chapin did a solo concert to benefit the theater. That kick-started the appeal to the public to fix the theater,” Barry said. The Palace had deteriorated so badly that audiences had to use umbrellas inside during Chapin’s show, and Chapin himself got rained on while he was singing.

The Reginald and Elizabeth Lenna Foundation donated $1,000,000 to the renovation campaign, and after funding goals were met, the theater was renamed the Reg Lenna Civic Center.

“We operate a full presenting season, and we also have a year-round movie series with $5 tickets. We have approximately 1,260 seats, and it’s the largest movie screen in Western New York,” Eads said proudly.

Film fans, children, and those interested in traditional stand-up comedy will certainly find at least one event to their liking. “The beauty of the Reg is that it’s the community’s theater. We try to make it as inclusionary and accessible to the community as possible, and I try to reflect that in the programming, too, by featuring a wide array of disciplines and cultures,” Eads said.

“We branched out from theater once it was going well,” Barry said. One main avenue is their low-power radio station, WRFA. Tune in to 107.9 FM to listen to the community-programmed broadcast.

The Reg showcases all kinds of art. One of the oldest billboards in the US was discovered in an exterior wall on Pine Street. “The brick façade started to fall, and [the construction crew] saw colors and writing underneath. After chipping the brick away, they found the billboard plastered to wood,” Ead said. The 20 foot by 10 foot 1878 Buffalo Bill Cody poster is currently on display in the lobby of the Reg.

“We also have a year-round art gallery. We [currently] have a show … called My Jamestown,” Ead said. The 3rd on 3rd Gallery hosts approximately seven art shows per year. “The exhibit, hashtagged myjtownny, is a compilation of community photographs originally posted on Instagram.

As “the largest, longest-established public theater downtown,” Barry emphasized involvement with Lucille Ball and Desi Arnaz. “We housed the world premiere of Forever Darling, a Lucy movie,” Barry said.
“The legend is that Lucy, when she was 19, fell off the stage into the pit and broke her collarbone,” Eads added.

“One is with George Carlin’s daughter, Kelly; Richard Pryor’s daughter, Rain; and Lenny Bruce’s daughter, Kitty, all of them famous comedians in their own right. The other panel discussion is with the Farrelly brothers, who directed Dumb and Dumber and There’s Something About Mary. They’re even bringing in the pet-grooming van with the floppy ears from Dumb and Dumber,” Barry said.

As for the future, “we’re getting ready to do a massive renovation,” Eads said. She plans to expand the Reg Lenna lobby and bring back the early 19th century aesthetic, which includes vintage light fixtures and a barrel ceiling.

“Growth is happening and the awareness within the community is happening,” Eads said, noting that ticket sales go up each year. “We hope to grow our audience even more,” Barry concluded. Visit reglenna.com for event details and a more detailed history, call 716-484-7070 or stop by in person; just head toward the classic marquee on East Third Street.

To read more of Emily Wynne’s creative and informative contributions to the Jamestown Gazette, please go to www.jamestowngazette.com.