Today, Rep. Tom Reed took a stand against the proposal in the New York State legislature to make the minimum wage for prison inmates $3 an hour.
“We care about ensuring hard working, law abiding citizens are treated fairly, but it seems the extremists in Albany would rather prioritize prison inmates by giving them a $2 raise an hour,” Tom said. “With proposed budgets cuts of $60 million for our local towns and villages and another $550 million in healthcare funding, how is it fair to propose a raise for prisoners?
“New York State is facing a $2.9 billion budget shortfall, and the executive budget proposal calls for billions of dollars in tax increases. And now, state taxpayers need to worry they may also be saddled with footing the bill for wage increases for prisoners? It’s offensive,” Assembly Minority Leader Brian M. Kolb said. “The proposed prisoner pay raise is misguided. Albany’s priorities should be centered around reducing the level of economic pressure placed on New York State residents and taxpayers. The state’s over-taxed, over-burdened, law-abiding citizens deserve better.”
“New York needs to get its priorities straight,” State Senator Fred Akshar said. “We’re currently facing a $5 billion total state budget deficit, should we really be considering a 400% raise to the taxpayer funded minimum wage for prisoners? Before we think about giving raises to prisoners, we need to fulfill our obligation to law-abiding citizens, like Direct Service Professionals who take care of those with developmental and intellectual disabilities. Last year Governor Cuomo promised a cost of living adjustment increase be included in each State Budget starting in 2018, but has since left it out of his 2020 budget proposal. We need to pay what we owe to law abiding citizens before raising wages for convicted felons.”
“Across New York, law-abiding citizens struggle every day to pay some of the highest taxes in the country.” State Senator Pam Helming said. “We should not be rewarding those who have been convicted of serious crimes with wage increases when seniors and families are struggling to pay their property taxes. We have a staffing crisis in our group homes, nursing homes, and veterans facilities. Shouldn’t this be our priority? I look forward to working with Congressman Reed as we continue our efforts to protect taxpayers and enhance public safety.”
“The ‘Prison Minimum Wage Act’ is an unbelievable proposal, especially with New York facing a budget deficit and when the state is already failing to live up to its promise of higher wages for hard-working, law-abiding employees like the Direct Service Professionals (DSPs) who care for our citizens with developmental and intellectual disabilities,” State Senator Tom O’Mara said. “Be fair to Direct Care before coddling criminals. There was a time when a proposal like this one would not have a chance of becoming law. However, members of the governing extreme-Liberal, New York City-centric Democratic majorities in the Senate and Assembly sponsor the legislation. In this new New York State Legislature, there’s just no telling what might be approved.”
“This proposal is yet, another misplaced priority we continue to see from the Democrats in Albany,” Assemblyman Phil Palmesano said. “We should be keeping the promise we made to help provide a living wage for the direct support professionals who provide vital quality of care and quality of life services to our most vulnerable citizens, the developmentally disabled. We should be providing better wages and benefits for the brave men and women who work as Correction Officers in a continued escalating dangerous environment inside our state’s correctional facilities. It’s time for Albany to get their priorities right. Pay raises for direct support professionals who care for the developmentally disabled and Correction Officers who keep us safe YES! Pay raises for inmates No!”
“I am opposed to any changes in wages for prisoners especially when the state is facing a $3 billion budget deficit,” State Assemblyman Joseph Giglio said.
Prison inmates are currently required to work around 30 hours a week for wages currently ranging between 10 cents and $1.14 per hour for work that can include cleaning and manufacturing goods. 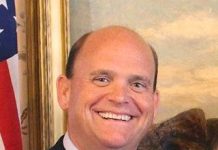