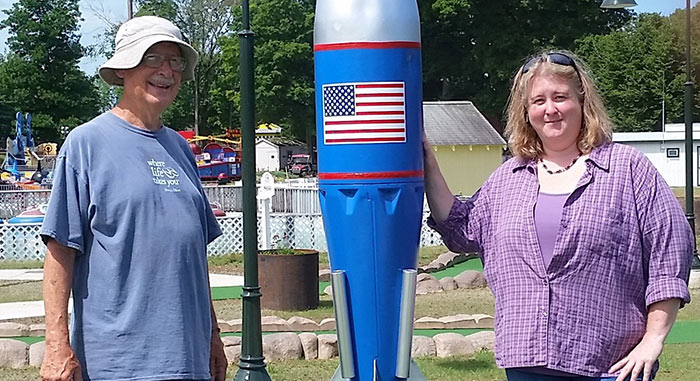 Peter Sullivan said, “I have an idea for a project!” And that’s all it took to start the ball rolling.

Within only two short years the retired financier and Jamestown native had gathered a small army of friends and volunteers, the Friends of Midway, an A-Team of corporate, civic and state government sponsors… and a half-million dollars. Pete’s little project became a statewide model of public/private partnerships.

On Friday, July 1, Midway State Park proudly re-opened its historic miniature golf course – now renamed Putt Around Chautauqua – the modern day revival of its more than 60-year-old predecessor where tens of thousands of local fans had putted around the fondly remembered course for generation after generation. The new course features spectacular new themes and fun new challenges at each new hole.

Peter Sullivan and his wife Holly did the research, drove to Traverse City Michigan and picked Adventure Golf Services for the job. Their mini-golf courses delight players on luxury ocean cruise liners around the world, at Disney and Jack Nicklaus resorts and hundreds more.

They built Putt Around Chautauqua unlike any other course. Every hole has its own special Chautauqua County theme, artistically and lovingly dedicated by a local family, a friend of the community, civic organization or sponsoring business.

Simple Story – Big Results
Always one to give credit where it is due, Sullivan attributes the project’s origin to his grandson Beckett’s simple request on July 4, 2014. “Can we play miniature golf at the park, Papa Pedro?”

“We played,” Sullivan said later, “but I was embarrassed for Midway. The course was so run down that there were 3 or 4 holes we couldn’t play at all. The greens were tattered and the concrete was badly cracked and heaved. It was disintegrating from within.”

Marla Bingham-Connelly, serving as Park Manager at Midway for the NY Department of Parks, Recreation and Historic Preservation, credits Sullivan and the team he assembled for making a truly remarkable contribution. “We see at least 100,000 people here every year between Memorial Day and Labor Day,” she said. “But this year I expect a lot more new visitors and old friends coming back to play on the course they grew up with.”

“Governor Cuomo is moving $90 million of state funding into the New York State Park system every year,” Connelly added. So the Friends of Midway, the volunteers, contributors and sponsors, raised more than $270,000 in two short years and New York State gladly matched it, in money and in kind.

Old is New Again
“Everybody remembers that beautiful Rocket Ship and recalls putting a hard hit tee shot up and around the Loop-de-Loop on the old course,” Connelly said, “so we’ve carefully restored the rocket and Pete had an exact duplicate of the Loop-de-Loop made – the old one had rusted too much to repair – and we’ve kept them in the course for old time’s sake.”

A new fountain and a dramatically illuminated waterfall will light the night for the course along with new LED-equipped and picturesque old fashioned lamp posts. The miniature golf course will stay open until 10 every night, three full hours beyond the park’s usual closing time. Hours for the rest of the park are from noon to 7 p.m.

“It’s the history behind a lot of it that’s fascinating to me,” Connelly said. “There’s something here from just about every era the park has been open. I love that we represent every era all the way back to 1898.”

The Work Goes On
“The rest of the park is getting a makeover, too,” Connelly said. “The carousel horse restorations lovingly completed by the Friends of Midway over the last few years were a good beginning for what that ride needed. But now we have also upgraded the bearings and gears and the sweeps that hold up the horses. Mechanically, the carousel only limped through the end of last season. Now it works like it was always meant to. It is part of the work we’re doing for safety and efficiency. ”We’re doing a lot of not so visible things that are even more important than what people can see.”

“This fall,” Connolly said, “we’re moving and refurbishing the roller coaster. It needs some work. Bit by bit it has sunk into the ground just a little. We’re moving the helicopters onto a new pad, too. It’s lost a little in height. And wherever it is needed, we’re reworking the hydraulics, pistons and cylinders on all the rides. You can’t see the improvements, but safety and efficiency are at the top of our priorities.”

Midway’s historic Cars & Roadway attraction is one of the oldest of its kind in the country. According to Connelly it goes all the way back to the 1950s, and possibly as early as 1948. “I have to look for parts, especially tires, from hand cart companies, aircraft tailwheel companies and anyplace else I can. Nobody makes the original parts any more. And for the helicopters, we got the last six tail spinners the manufacturers had in stock.”

Park Manager Connelly also manages Long Point, Lake Erie and Sunset Park State Parks and Barcelona. She brings to the job an undergraduate degree from the University of Montana in recreation and natural resource management, an MBA from Columbia University and the necessary Civil Service credentials for the work.

A Few Holes in Brief
Putt Around Chautauqua is a fun par 44 course. Each hole offers ways to make the hole for everybody in the family, from kids to duffers to the most eagle-eyed. Each is interesting and unique. A few examples:

Hole #3 is “Sullivan’s Challenge”. It looks like an easy straight shot right off the tee… except the hole is on top of a hill! Like putting into a little volcano. (Presented by Lee Lee & Papa Pedro.)

Hole #5. Take a rest on a beautiful wooden bench guarded by Mama Bear and Baby Bear, gorgeously hand-hewn by the husband and wife team at T&D Carving form Pennsfield, PA. Then tee off at the Bell Tower. It is a two-story replica of the famed Chautauqua Institution Bell Tower, built in loving Memory of Ronald E. Hermance, Jr. Putt straight through the tower’s basement hallway, then turn right and putt for the hole. (Presented by Ron’s wife, Kris.)

Hole #8. The Rocket Ship Hole. Greet Rocky the Spaceman in his rock-filled, welded rebar spacesuit. He was dedicated by Susan Peterson, wife of the late Randy Peterson, a long-time community leader and a great friend to many. The Rocket Ship is the restored, original rocket that graced the course for more than a half century. A straight shot off the tee just might roll right under the launching pad and drop onto the green below. A lucky hole-in-1 is a possibility here, but don’t bet on it ‘till you see it. (Presented by Carolyn Tyler Swanson for the grandchildren.)

At hole #9 golfers will meet the Smuckers, dedicated by PB&J. Enjoy the Strawberry Bench.

Every hole tells its own story and every story makes the new Putt Around Chautauqua a course to enjoy all summer long.

Follow the Money
“The course belongs to New York State now,” Peter Sullivan said at Friday’s opening. But since it is a model public/private partnership, according to Jay Bailey, Regional Director of the Allegany State Park Region who spoke at the occasion, a portion of the proceeds from the course will go back to Friends of Midway to continue rebuilding and purchasing new attractions and rides for the park.

But more than priceless, according to Sullivan, was the thousands of hours of volunteer work turned in by friends throughout the project. Among the far too many to mention all, however, he especially thanked his wife, Holly and his good friend, retired auctioneer Chuck Ludwig. “It’s been fun and it’s kept me occupied,” he said, “but this would never have been possible at all without them.”