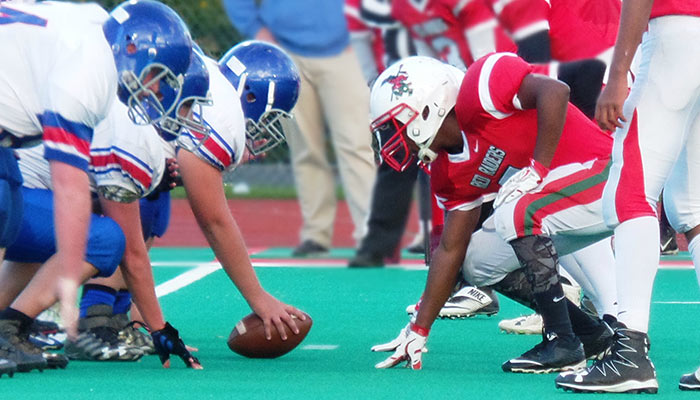 It’s that time of year again. The trees are catching fire, the sun is tucking itself in earlier each night, and cool Friday evenings are spent huddled under the arching white lights that accompany high school football games. The turn of autumn can only mean one thing: play-off season is upon us.

As regular football season draws to a close, high school teams are reflecting on the games behind them and preparing for the even bigger games that lie ahead. Local teams are split between five different Classes based on school enrollment size – AA through D, from biggest to smallest – and will compete accordingly. And no matter whether schools have achieved a winning or losing record thus far, there is always one certainty about play-offs: that anyone can win.

“Once play-offs start, all records are out the window,” said Jehuu Caulcrick, head coach at Southwestern Central School. “You’re 0-0 and every game you’re fighting for a chance to play at the New Era Field formerly known as Ralph Wilson Stadium in Orchard Park, home of the Buffalo Bills.”

Caulcrick may dismiss standings come play-off season, but Southwestern’s winning record was hard-won. At the time of press, they led Class C standings with a 4-0 league record, followed respectively by Gowanda and Chautauqua Lake.

But Southwestern isn’t the only team gunning for a win in play-offs. Maple Grove, in the first year since its split with Chautauqua Lake’s Varsity team, currently tops Class D with an undefeated record, followed by Silver Creek/Forestville Central and Franklinville/Ellicottville. Olean also holds an undefeated record, securing its place at the top of Class B just ahead of Dunkirk.

As for Class AA, Jamestown stands against the biggest schools as the only local hope for a win. The team has faced some obstacles this season with one league win and three losses, but Head Coach Tom Langworthy thinks they’re on the right track.

“Coming off our recent win against Frontier, we feel like we have momentum heading into the last week of regular season and playoffs,” he said. “We are improving and gaining momentum at a very important time in the season.”

While bringing home a trophy is the dream for any football team, both Caulcrick and Langworthy agree that play-offs are about more than just winning. Both coaches describe their teams as “close-knit” and note that play-offs are an important time to recognize hard work and sportsmanship, not just a winning record.

“Going to the play-offs means a lot for these kids,” Caulcrick said. “We came out with a focus every single day on that practice field, and they’re starting to see all their hard work pay off right now.”

Sub-regional play-offs for Classes A through D will be held November 4 and 5, according to the New York State Public High School Athletic Association. Regionals and semi-finals will follow the next two weekends. Final championships this year will fall on the last weekend in November, with Classes A, C and D battling for the title on the 25th and Classes AA and B crowning a victor on the 26.

Hockey is Back in Jamestown