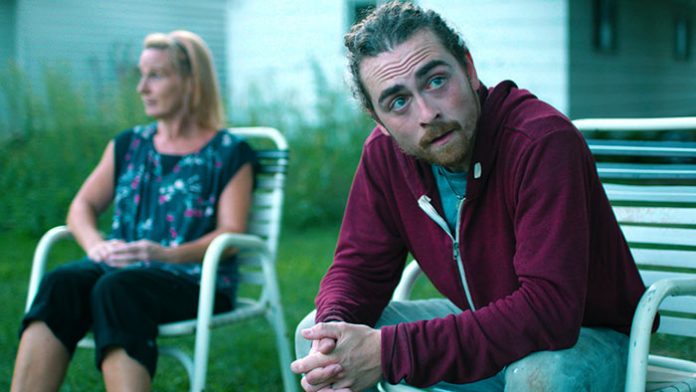 Mother’s Day, a film written and produced by local filmmaker Travis Carlson, premiered at the Reg Lenna Civic Center on Saturday, April 2. The film was shot on location in Gerry, Chautauqua County. “This is a true story,” said Travis. “It is also a Western New York and Chautauqua County story. For that reason we thought it important to film at the actual location.” Local viewers will recognize the landscape along Route 60 out of Gerry and such landmarks as Heritage Village and the Country Fair. A stunning opening scene, shot from high above with a drone mounted camera, follows a solitary motorcycle driver past hills and fields familiar to Chautauqua County residents. The story recreates a conversation between a mother with a long history of mental illness and her son trying to confront her condition. Highly emotional, visceral and unsettling, this is no Hallmark Mother’s Day.

Pan-American Film Division was a nickname Travis and his associates called themselves while making short films since 2018. For several years Travis had been shooting special features and documentaries for the Pagoulas and their sports franchises. In 2020, in order to produce Mother’s Day and take on projects for hire, the group formally incorporated as a Limited Liability Corporation. Travis wrote the script in the fall of 2019 immediately prior to the covid pandemic. Nevertheless, with a limited budget, a dedicated staff of volunteers and an entrepreneurial dream the project was completed and released to the public. It seemed only fitting that it should arrive near upon the first of May and Mental Health Awareness month.

NAMI’s advocacy includes publicizing personal stories about peoples’ own mental health journeys. Media attention, particularly print and video made widely available, is a valuable tool to educate the public concerning mental health. Mental illness has long been feared and stigmatized in this country. The shame attached to mental illness often leaves it hidden or denied. Personal stories are testimony to the reality of mental illness and to its prevalence in society. As such they are effective in countering misperceptions.

Mother’s Day is one such revealing story. Travis Carlson grew up in Gerry. He attended Cassadaga Valley Central Schools. He began shooting video in his teens and soon attracted friends and acquaintances to collaborate in his hobby. The group shot a number of full length films before realizing that filmmaking was a viable career option. Eventually, Travis found work shooting film commercials. During the pandemic, while Mother’s Day was in production, he filmed plays for the Irish Classical Theater repertoire to be shown on their website. The dialogue in Mother’s Day, he says, is the “almost verbatim” conversation he had with his mother in 2014 at her home in Gerry. The conversation takes place on lawn chairs in her backyard among neighbors sometimes visible. A rural small town western New York culture is prevalent throughout the film. Before production began Travis sought permission from his mother to make public her intimate story. She gave her blessing, believing, like NAMI, that her story might very well help others fighting mental illness. The result is a potent portrait of the effects of mental illness upon an individual andwithin a family. 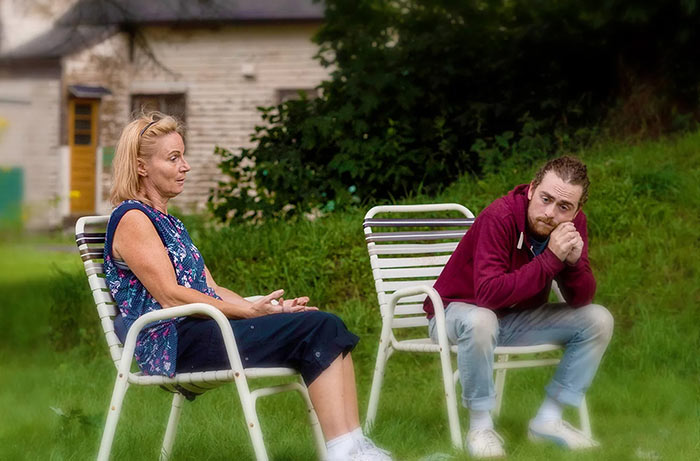 Mother’s Day may be downloaded, streamed or purchased at the Pan-American Film Division website (www.panamericanfilms.com/mothers-day). The film runs slightly over two hours. The website includes interviews with the two principal actors—Lisa Ludwig and Michael Charles Wagner—as well as trailers, staff interviews, audience reactions and much discussion on the process of putting the film together. Obviously, working through the pandemic was a challenge. A limited budget demanded efficiency and cooperation among the staff. Travis remembers fondly driving his father’s lawnmower, a necessary prop, five miles along Route 60 to the set. That Pan-American completed the film is a testament to its commitment to the subject and its determination to build a creditable film production company. The Jamestown Gazette wishes the company well and looks forward to future productions.

Friday evening, April 29, at The Jamestown YWCA Chautauqua County executive P.J. Wendel issued a proclamation designating the month of May Mental Health Awareness Month 2022. On the same date in Washington D.C. the Executive Office in a similar proclamation called upon citizens, government agencies and non-profit organizations “…to join in activities and take action to strengthen the mental health of our communities and our nation.”