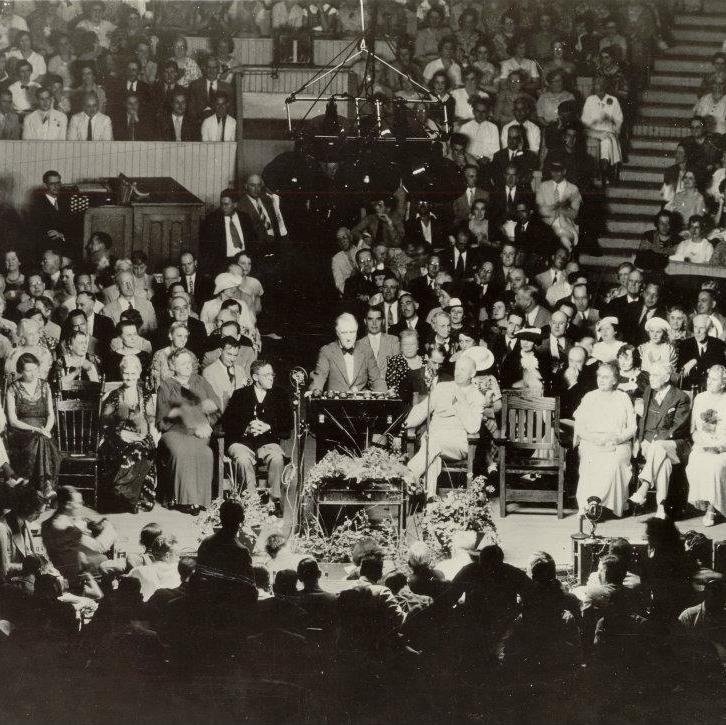 The 1891 Fredonia Opera House will present Chautauqwhat? as the seventh talk in its 2019 Chautauqua County History Lecture Series on Thur., Oct. 10, at 7:00 p.m. Chautauqua Institution Historian/Archivist Jon Schmitz will give the illustrated lecture. This event falls during the Feeding Fredonia Food Challenge, of which the Opera House and the Village of Fredonia are participants.

Schmitz’s talk will focus on providing an overview of how the “Chautauqua Assembly” was started, how it grew into a national movement, which then declined and is now in resurgence being, perhaps, more relevant than even before.

Schmitz has been employed as an archivist for a total of 26 years, the last 17 of which have been for Chautauqua Institution. He also is a public speaker on a variety of subjects, both on history and archival practice, the author of several articles and the co-author of The Chautauqua Institution: A Postcard History (2011). He has been interviewed for and participated in several documentaries, including PBS’ Chautauqua: An American Narrative, CBS’ Building a Global Neighborhood: The Abrahamic Community, and on CBS’ Sunday Morning, NPR Radio, Voice of America, and a variety of local radio and television programs.

He is a member of the Academy of Certified Archivists, and a former member of the New York State Archives Regional Advisory Committee, and a Grants Assessor for the New York State Archives. He previously served as the Director of the Records Management and Archives Department for the College of Physicians and Surgeons of Ontario, and is a private consultant for corporate archives and records in both the United States and Canada, primarily for non-profit organizations.

Admission to the presentation is free, with donations gratefully accepted.

The Opera House and Village of Fredonia are participants in the Feeding Fredonia Challenge, which runs October 7-18. Patrons are encouraged to bring a non-perishable food item to the event. Items collected will be given to the Fredonia Food Pantry at the Fredonia Presbyterian Church. The goal is to collect nearly 3 tons of food for neighbors in need! Food items particularly needed include beans, canned fruit, canned meats, canned vegetables, cereals, coffee, dry milk, peanut butter, rice, soups, spaghetti sauce, pastas, canned spaghetti sauce and jelly.

The 1891 Fredonia Opera House is a member-supported not-for-profit organization located in Village Hall in downtown Fredonia. A complete schedule of Opera House events is available at www.fredopera.org.

Opera House to Present Ukulele Master in Concert and Workshop