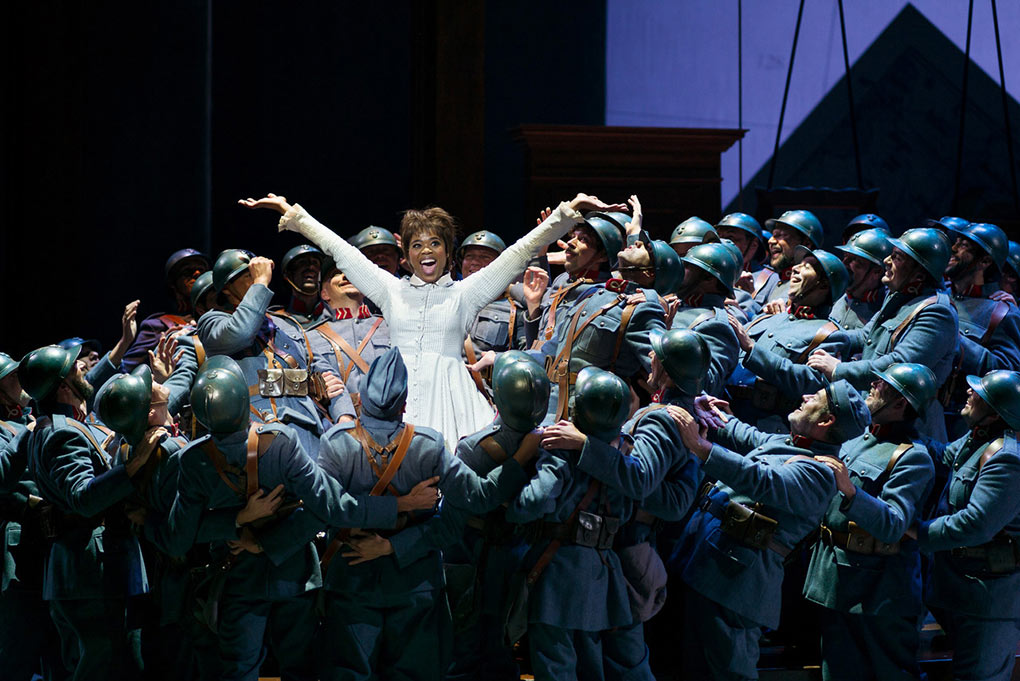 Live at the Met, the Metropolitan Opera’s award-winning series of live, high definition (HD) opera transmissions to theaters around the world, continues its 2018-19 season at the 1891 Fredonia Opera House on Sat., Mar. 2, at 1 p.m., with Gaetano Donizetti’s comic romp, La Fille du Régiment.
Tenor Javier Camarena and Soprano Pretty Yende team up for a feast of bel canto vocal fireworks – including the show-stopping tenor aria “Ah! Mes amis,” with its nine high Cs!
Maurizio Muraro is the comic Sergeant Sulpice, with mezzo-soprano Stephanie Blythe as the outlandish Marquise of Berkenfield.  Academy Award nominee Kathleen Turner also will make a cameo in the non-singing role of the Duchess of Krakenthorp.  Donizetti’s frothy comedy mixes humor with a rush of buoyant melody and notorious vocal challenges. The story concerns a young orphan girl raised by an army regiment as their mascot and begins at the moment of her first stirrings of love. Complications (and comedy) ensue when her true identity is discovered. The action is startlingly simple and unencumbered by intricate subplots, allowing the full charm of the characters and their virtuosic music to come across in an uninhibited way.

Enrique Mazzola conducts the production, which runs two hours, 35 minutes, with one intermission.
Live at the Met telecasts are now shown in more than 2,000 theaters in 75 countries, making the Met the only arts institution with an ongoing global art series of this scale. The Met was the first arts company to experiment with this type of broadcast, beginning on a modest scale in 2006 and growing every season since then, with more than 10 million tickets sold to date.
Met Opera stars serve as hosts for the series, conducting live interviews with cast members, crew and production teams, and introducing the popular behind-the-scenes features; altogether, the worldwide audience is given an unprecedented look at what goes into the staging of an opera at one of the world’s great houses.
Individual tickets to each of the operas in the season are $20, ($18 Opera House members, $10 students). A flexible subscription of eight tickets which can be used however you want – one at a time to eight different operas, all at once for eight people, or anything in between – is available for $142. Tickets may be purchased in person at the Opera House Box Office or by phone at 716-679-1891, Tuesday-Friday, 1-5 p.m. Tickets may be purchased online anytime at www.fredopera.org.