The Free-For-All was started 25 years ago by local folk group The Newton Street Irregulars as a way to help promote the Folk-in-Fredonia Music Series at the Opera House. Although half of The Newton Street Irregulars are no longer in the area, founding members Dick & Carmen Gilman still invite their musician friends from across the state to join them for this Opera House tradition. From fiddles, banjos and guitars to step-dancing, audience sing-alongs and tall tales, the Free-For-All is an afternoon filled with music, stories, laughter and fun.

The Series is Known Around the World

Part of the fun of the Folk in Fredonia Series for the past 25 years has been the creation of a series t-shirt each year. “The Gilmans began the tradition and have ensured that it continues today,” says Opera House Executive Director Rick Davis.

The t-shirts are designed to feature a list of all the concerts in the series for that year on the back. They are then sold at each concert of the series … if they last that long. “Some years, they sell out at the Free-For-All; and we have to print more,” says Davis.

“The t-shirts’ are colorful and look great,” adds Davis. But the real appeal has become the practice of taking a shirt with you whenever you travel and having your picture taken in it. Then, you send the picture to the Gilmans who add it to a scrapbook of photos showing the familiar shirts making an appearance around the globe!” To date, photos show the shirt in more than 135 locations throughout more than 40 countries.

“There are photos of the shirts in just about every state of the U.S., all across the Canadian provinces, and around the globe in such countries as Senegal, Spain, Italy, The Philippines, Australia, Germany, Hungary, Russia, Cambodia, Turkey, Ireland, The Galapagos Islands … even at the North Pole!”

A complete list and some of the photos can be seen on the Opera House web site. Click on “Folk in Fredonia Music Series” and look for a link to the list.

In a special celebration of the series’ 25th season, vintage Folk in Fredonia t-shirts from throughout the past 25 years will be on display and available for purchase with a donation to the Opera House in support of the series.

During the Free-For-All on Sept. 22, there will be raffles and giveaways of T-shirts, CDs and tickets to 2019-20 Opera House Folk Series concerts, which include: Arise & Go Celtic Trio with Clann Na Cara Irish Dance, North Carolina-based bluegrass band Cane Mill Road, and world folk music trio The Bards.

While the event is free, it will be ticketed, so please book early to guarantee your place. Tickets are on a first-come, first-served basis, and can be reserved by visiting the Opera House Box Office or calling 716-679-1891, Tuesday-Friday, 1-5 p.m. Seating is general admission. 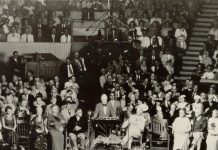 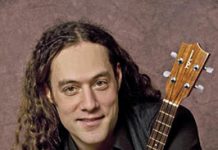 Opera House to Present Ukulele Master in Concert and Workshop 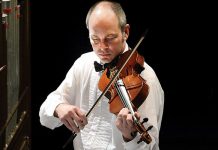