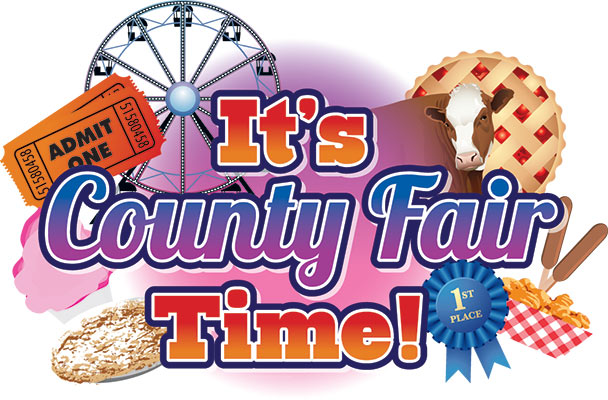 Bubbling laughter mixes with drifting music, the sweet scent of caramelizing sugar melds with warm buttery popcorn and lights flicker on twirling rides. Summer is in full swing, and hundreds of volunteers have worked tirelessly for weeks to bring back an annual tradition.

Fairs date back to the Middle Ages, and traditionally feature entertainment, exhibitions and competitions. The Chautauqua County Fair in Dunkirk, the Warren County Fair in Pittsfield and the Cattaraugus County Fair in Little Valley, give residents a taste of classic summer fun.

Chautauqua County Fair
USA Today named Dunkirk, NY, one of the top “10 great places for blue-ribbon county fairs.” Thousands of fairs take place each summer, most of which combine some form of agriculture, midway and grandstand events. What makes the Chautauqua County Fair so notable?

Dave Wilson, five-year president of the fair, says it’s because “this is the best fair that ties them all together.” When he’s not coordinating fair activities, Wilson — a Silver Creek native — works for the Chautauqua County Soil & Water Conservation District, where he helps local residents and business owners manage and protect natural resources.

A Balancing Act
While some fairs emphasize one aspect more than others, “a third of ours is livestock, a third of it is carnival, and a third of it is grandstand shows,” Wilson said. The layout of the grounds proves that equal space is devoted to each section of fair events.

One of the largest touring illusion shows in the country, Extreme Illusions and Escapes, starring the duo of Josh Knots and Lea, return this year for daily performances in the Arthur Maytum Family Theater.

The NYS Championship Demolition Derby takes place on Tuesday, July 26 and Sunday, July 31 at the grandstand. The event is free with admission, and pit passes are available for only $10.

To keep things fresh, Wilson and members of the board of directors attend the NYS Association of Agricultural Fairs Annual Convention and Trade Show in search of shows or vendors to bring to Dunkirk. New this year is Hansen’s Agri-Puppets. The puppets, which also visit other local fairs, provide a fun show that integrates agriculture — or Ag — facts into a family-friendly routine.

“We’re an Ag community … this county is strong in 4-H,” Wilson said. Various 4-H shows occur each day, and 4-H members run a snack bar near the Conservation Building.

A Family Event
“We pride this fair on being family-oriented,” Wilson said. Wilson himself had a hand in creating many of the family-friendly agriculture events and activities. When the previous Ag coordinator stepped down, Wilson volunteered to take over planning the Ag section and overseeing grandstand events.

“We do a tractor pedal race where they actually race on an obstacle course,” he said about the Kid’s Tractor Race, which takes place at 2:30 p.m. on Friday.

A variety of stations allow kids to the experience of milking a cow, building scarecrows, picking apples, digging potatoes and gathering eggs. When little farmers get tired, they can ride on tire-swing horses, or play in one of the large sandboxes filled with corn or wheat kernels.
“You’re a farmer for a day,” Wilson said.

The first recorded Chautauqua County Fair took place in 1821. It consisted mainly of prizes for the best farms and livestock. Fairs were held at irregular intervals “rotated around the county” from 1821 to 1881. In 1881 the fair took place in Dunkirk, where it has been held ever since, annually at the Dunkirk Fairgrounds from 1917 to the present, with one exception.

The US Government took over the fairgrounds from 1942-1944, in the midst of World War II. Since the military draft sent able-bodied men to war, farm families and manufacturers faced a labor crisis. German, Italian, and Japanese prisoners were brought to Dunkirk to harvest crops and man food processing plants. The prisoners of war were housed in Floral Hall and the livestock barns, which still stand today.

Tickets and Dates
Wilson invites everyone to come experience the Chautauqua County Fair “at a price a family can afford.” Presale tickets cost less than a fast-food meal at only $6, and day-of tickets are $12. This “pay one price fair” includes all events and unlimited midway rides.

Though the Cattaraugus County Fair began in 1842, it is referred to as “WNY’s Best Kept Secret.” Ironically, the New York Times listed it as a “major county fair” within the tristate area of New York, New Jersey and Connecticut. It has all the standard fair features — friendly animals, thrilling rides, mouthwatering food — and a few extras.

Have you ever seen a pig race? Picture stubby legs frantically trotting along a track, corkscrew tails bobbing, snouts wrinkled with anticipation. Come watch Swifty Swine and friends compete on land and in water for the coveted grand prize: an Oreo cookie.

Horses Horses Horses! features the international equestrian Lisa Dufresne, dressage star and horse trainer. Dufresne dedicated her life to training animals, choreographing and performing routines, and caring for her horses. A team of miniature stallions, — along with other horses — waltz across the arena performing tricks both freely and under harness.

Brunon Blaszak, a third-generation tiger trainer, presents his Royal Bengal Tigers for the first time in Cattaraugus County. Blaszak and his mother, who attended the Polish State Circus School, are devoted to protecting this endangered species. Their shows enforce respect and appreciation for tigers.

Shift gears in the evenings for the Monster Truck Rally, the Big Rig Truck Pull and the World’s Largest Demolition Derby.

Since 1998 the Cattaraugus Country Fair has provided music-lovers with at least one well-known artist or band each year, and 2016 is no different. Country singer-songwriter Dustin Lynch will perform on August 4 in the grandstand.

This “All Around Family A’Fair” has a petting zoo, the Granpa Cratchet Puppet Show and a Kids Power Wheels Demo Derby. August 3 is Youth Day, with reduced rates for kids under age 16. Many of the daily events appeal to people of all ages.

Be sure to check out the Domestics Building to see the best vegetables, flowers, arts and crafts in the county.

The Cattaraugus County Fair is located in Little Valley, home of the Little Valley Speedway. The fair takes place Monday, August 1 through Sunday, August 7; the daily pay-one-price admission is $7. For more information, go to cattarauguscofair.com.

The Warren County fair originated back in 1850 at the Sugar Grove Agricultural Show, and is now in its 86th consecutive year. The fair comes together under the hard work of many Warren County residents.

“We are a volunteer fair. None of the officers, directors or fair workers get paid,” Dale Bliss, Vice-President of the Fair Board, said.

Bliss has served on the Fair Board for seven years. “The Board of Directors is a tight-knit group of great people who really care about providing our area an excellent fair experience. It’s a privilege to be a part of that,” he said.

This fair may be best known for the Motorsports Arena. The large dirt track is well-lighted by floodlights and seating is plentiful. Combustion engine fanatics — or anyone seeking the adrenaline rush of competitive motor sports — can attend the Antique Tractor Pull and Modified Truck and Tractor Pull. Stock Car Football, reminiscent of the traditional demolition derby, is a Warren County exclusive event involving a large, nearly car-sized ball.

The Warren County Fairgrounds board prioritizes visitor accessibility and safety. “We work hard to remain a venue that families can come and enjoy … without having to worry about their children. We have local law enforcement, a professional security company and emergency medical services on site 24 hours per day,” Bliss said.

Parking lots feature handicapped parking spaces and van loading areas. Most of the grounds have been recently paved, which allows people of all abilities — and stroller-pushing parents — to navigate the fair smoothly.
“I grew up attending the fair,” Bliss said. He and the other board members, most of whom also grew up in Warren County, “strive to improve the family experience every year.”

A Warren County Fair Queen has been crowned annually since 1987. The Queen and her court lead kid-friendly activities throughout the week. Hansen’s Agri-puppets and Team Rock — a hands-on gymnastic martial arts performance — will amuse everyone in the family.

When he’s not volunteering, Bliss enjoys camping. The fairgrounds, which total 110 acres, hold 600 campsites, many of which are currently occupied by 4-Hers participating in the fair’s agriculture events.

“We work hard to set the bar high for everything we offer. The best carnival company, the best motorsports promoters, the best judges, the best in quality, affordable concerts, the best camping … the list is endless,” Bliss said.

There is no gate fee Monday, August 8, when the Fair Queen Contest, Draft Horse Fun Show and exhibit setup and judging take place. Main attractions and events occur August 9 through August 13. Gates open at 8 a.m., and the fair closes at 11 p.m. Parking, daily shows and mechanical midway rides are free with admission. Single tickets are $9: see warrencountyfair.net for more information.

Our Children, Our Future.