We moved recently and I completely underestimated the impact it would have on nearly every aspect of my life. Getting the girls up, ready, and out of the house each morning is almost impossible. Finding matching socks (or socks at all!) hasn’t happened in 11 days. And 3-4 hours of sleep on at mattress on the floor in the middle of boxes now constitutes as a “good night’s sleep.” But none of that compares to the real struggle of moving. Prepare yourself for the horror. We no longer have a DVR.
Seriously, I’m three weeks behind on The Walking Dead, and I’ve been reduced to watching the Bills games on an 11” TV connected to an antenna in my garage. The struggle is real. But there has been one saving grace. On the same television that has brought me the shallow and disappointing performance of the Bills, I caught a show running on reruns I never would have seen otherwise at 1:30 in the morning the other night. It’s called “One Day At A Time,” and I might be the newest fan. And I’ll give you three reasons why:

I’ll unpack that last one.
“One Day At A Time” is about a single mother raising her two teenage girls in an apartment building where she befriends the building’s super, Schneider. At some point a young boy, named Alex, moves in with the family and becomes just as connected to Schneider. Until, that is, he burns the super’s camper to the ground after trying a cigarette inside. Reluctantly he confesses, and the adults in the show lose it. Schneider tells the kid he never wants to see him again. Alex is crushed. Full disclosure: So was I.
Later, however, Schneider returns to let the boy know the new terms of their relationship. They are no longer friends. They will no longer speak to each other for a period of time lasting no shorter than two years. But even as he talks you can see the reality of his words sinking in, and he begins to relent. Two years becomes one, becomes six months, becomes three, becomes dinner that night. And the whole thing happens unlike Modern Family or Blackish with a punch line so you feel good, but in a raw and uncomfortable way that somehow still feels resolved and …right.
A few weeks ago we heard together in church that “…all have sinned and fallen short of the glory of God” (Romans 3). We don’t need a DVR or an antenna to watch people fall apart, because daily we watch our relationships with God, with each other and with creation suffer. We sin against God. We do not love our neighbors as ourselves. We do not love ourselves. And the punishment for that disobedience and sin is that we no longer get to be in right relationship with God or anyone else.
At least it’s supposed to be. That is, if God were willing to let us get the punishment we deserve. But God is not. We also heard from Romans 3 that “now all are justified by God’s grace as a gift.” And Romans 5 says that God has given us the message and the ministry of that reconciliation for the sake of the world.
We may watch our world fall apart daily—on our televisions or in our lives, but we were not created for that isolation and conflict. We were created for harmony, relationship and peace. And God will see that through. Schneider couldn’t imagine not speaking to Alex who had become like a child to him for any amount of time; no matter how mad or disappointed he was. And God will not consider a world where God is not in relationship with us; whether we deserve it and no matter what we have done or will do. Through Christ, God makes things right with us and calls us to do the same with each other, “One Day At A Time.”

For more inspiration and insights from Pastor Shawn’s past columns, please visit www.jamestowngazette.com and click on the Faith Matters page. The Jamestown Gazette is proud to present our county’s most creative and original writers for your enjoyment and enlightenment. 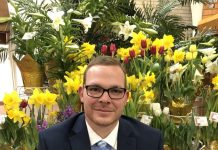