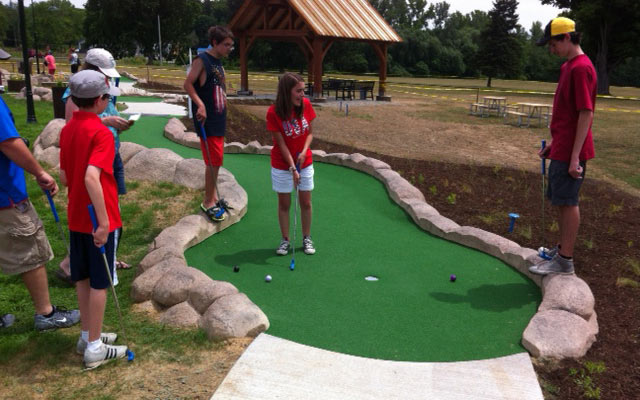 Article Contributed by
Putt A Round Chautauqua

Putt A Round Chautauqua is the name of the new miniature golf course that is now open at Midway State Park on Route 430 in Bemus Point. Named for the county’s varied sites and themes which are featured on the course – including the National Comedy Center, Chautauqua Institution, and many more – the new 18 hole course was hailed as “one of the best in the region” by Shawn Murray of Bradford, PA who played with his family over the recent holiday weekend. “Challenging – but not discouraging – and fun for everyone, “ he added.

The new course came about through an unusual partnership between New York State’s Office of Parks, Recreation, and Historic Preservation which operates Midway State Park, and the nonprofit Friends of Midway State Park, an all-volunteer charitable group that has been raising funds to restore key rides and features at the park for the last six years. Through this partnership, the state contributed $200,000 in materials and the Friends group raised $270,000 for design, labor, and the building out of the features on the course. Bob Wooler, President of the Friends of Midway emphasized, “The teamwork with the state was unique, but the vision and driving force behind Putt A Round Chautauqua came from Peter Sullivan, a local resident and golf enthusiast whose energy and passion made this happen.”

The course is open Wednesday through Sunday from Noon to 10 pm and the cost to play is $5 per round. According to Wooler, “It is important to emphasize that although the rides and the rest of Midway State Park close at 7 pm daily, the mini-golf stays open until 10.” During these evening hours all proceeds from mini-golf play will go into a fund that will be dedicated to purchasing rides and attractions for Midway to further restore it to its 1950s heyday. “By playing the course in the evening,” he explained, “you can be helping to buy a ferris wheel, a paratrooper, or a scrambler ride to add to the attractions at Midway, one of the oldest continuously operating amusement parks in the country.”