Ken Omeruo is a native of Nigeria who moved to Jamestown with his family in August 2014. Before he moved to the United States, he began a media and publicity company which counted technology companies from the United States, Israel, South Africa, and Dubai amongst its clients. Omeruo is the author of “How to Create Unlimited Internet Wealth” and is a member numerous professional organizations that champion technology, innovation, and youth entrepreneurship in Africa.

Kay Marker Magneson is a renowned stained-glass artist who lives in Bemus Point with her husband, the Rev. Lee Magneson. Lee and Kay were married on Nov. 29, the day before her induction into the Rotary Club of Jamestown. Lee Magneson, who sponsored his wife’s membership, said he was thrilled to marry such a lovely woman one day and induct her into a service organization that he holds near and dear to his heart the next day.

Kevin Sixbey is the owner of Sixbey Insurance Agency, which he founded in 2014, an independent insurance agency that provides property and casualty insurance solutions for businesses and individuals. He is the founding president and coach of the Chautauqua Lake Rowing Association; a former city of Jamestown parks commissioner; and is active in the Boy Scouts of America. Pictured above are Sixbey and Rotarian Sharon Hamilton, who sponsored his membership.

Sherry Hutley is the director of sponsorships and marketing for the Jamestown Savings Bank Ice Arena. She’s a graduate of Jamestown Business College and began her career working in advertising at The Post-Journal. 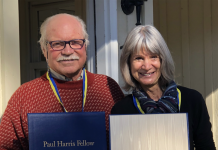 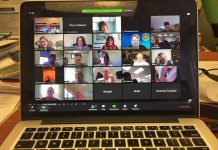