The City of Jamestown has unveiled a new historical marker honoring local and national Suffrage Leader Edith Ainge. The City’s 76th marker is located on the corner of Fourth and Pine Streets near where Ainge was living during the final years of the suffrage struggle.

Edith Ainge immigrated from England to the U.S. with her family when she was 10 years old, becoming involved in the suffrage movement in 1914. Her family lived adjacent to her father’s accounting firm on East Fourth Street in Jamestown.

Ainge chaired the Jamestown branch of the Women’s Political Union. She took part in demonstrations organized by the National Women’s Party in Washington D.C. in 1917 where she was arrested several times during peaceful protests. After her first arrest, she was sentenced with other women to serve 60 days in a workhouse in Virginia.

Ainge was elected treasurer of Alice Paul’s National Woman’s Party in 1922 and continued to serve on the organization’s National Council until at least 1930. As part of the NWP’s inner circle, she helped promote what became known as the Equal Rights Amendment, which Paul first proposed in 1923.

Mayor Eddie Sundquist thanked the Marker Committee for their work in selecting and researching the site, “This summer our country celebrated the 100th Anniversary of the adoption of the 19th Amendment. It is timely and appropriate to be unveiling this marker that recognizes a local woman’s efforts to work toward making the right to vote more of a reality for women.”

City Historian Ashley Senske said, “I thank former Mayor Sam Teresi, who supported the marker’s selection before he left office. We have a rich history in Jamestown and the marker program plays a role in bringing it to residents and visitors in an accessible way.”

Ainge continued to make her home in Jamestown into the 1930s. When she passed away in 1948, her death was noted in the New York Times as well as the local papers. She was laid to rest in Jamestown’s Lake View Cemetery, alongside her parents, William and Susanna, and six of her siblings. 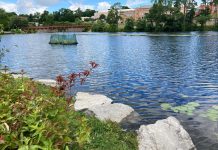 Partial Closure of Riverwalk Due to Construction 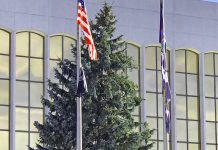 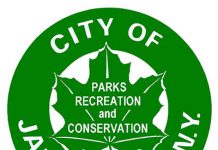