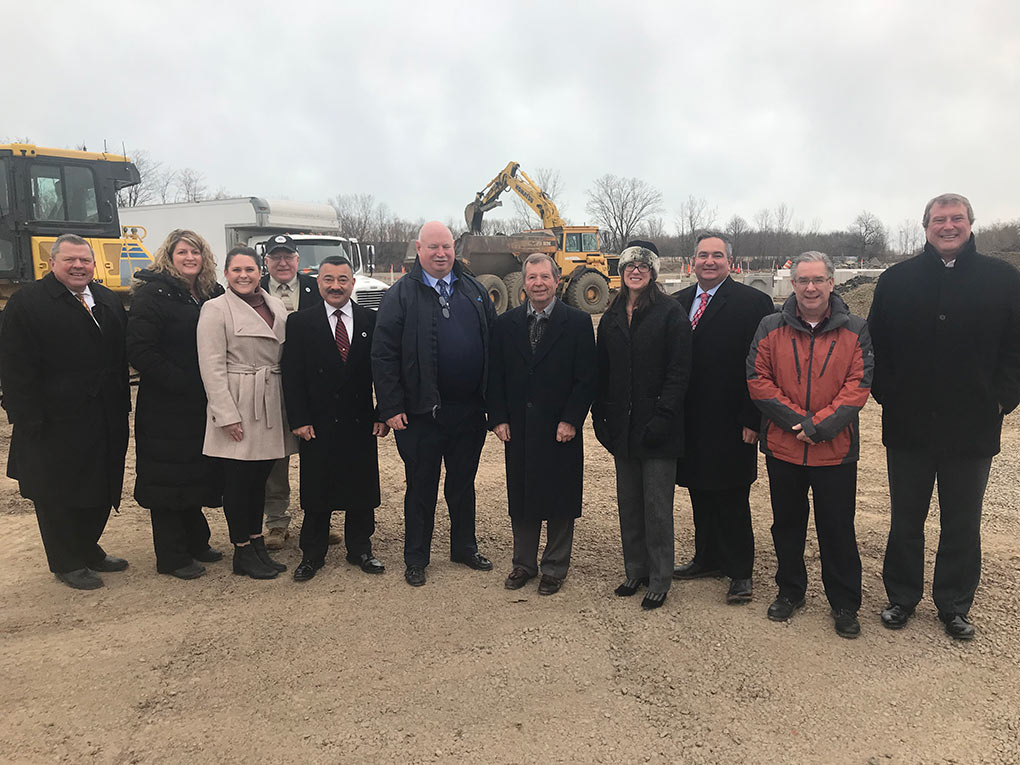 Mark Geise, Deputy County Executive for Economic Development and Chief Executive Officer of the County of Chautauqua Industrial Development Agency (CCIDA), announced this week that construction of the new cold storage warehouse for Fieldbrook Foods has begun at 320 South Roberts Road, the former Edgewood Warehouse Brownfield Site in the City of Dunkirk.
Geise stated, “This is a big win for the City of Dunkirk and Chautauqua County. After years of blight, this project will result in the cleanup and repurposing of a large brownfield site, resulting in a beautiful, modern new facility that addresses our long-standing shortage of available local cold storage space.”
The revitalization project includes acquisition, remediation, new construction and equipping of a new 80,000 square foot freezer warehouse. After decades as a contaminated eyesore in the City of Dunkirk, the dilapidated 167,400 square foot Edgewood warehouse on Roberts Road has now been demolished to make way for a brand-new cold storage facility to serve Fieldbrook Foods, also located in Dunkirk. Property remediation and abatement is being performed as part of the New York State Department of Environmental Conservation (NYSDEC) Brownfield Cleanup Program. Site preparation is complete and concrete foundations are underway. The new facility will provide off-site storage for Fieldbrook Foods’ finished frozen dessert products.
Fieldbrook Foods produces a comprehensive portfolio of private-label ice cream products and frozen novelty items. The new freezer will be located within one-half mile of the production facility, providing increased operating efficiencies and reduced transportation costs for the company.
Mayor Wilfred Rosas and his Department of Development team were instrumental in securing the project location in the City of Dunkirk by providing site selection and due diligence assistance leading to the project’s current location. The development is located within what is known as the “Roberts Road Redevelopment Site,” which also includes former brownfield sites Roblin Steel and Alumax Extrusions – both previously remediated.
With a rich history in manufacturing, the three brownfield properties that comprise the site were once a part of the larger Brooks Locomotive Works, developed in the 1800s, that later became the American Locomotive Company (ALCO). After the closure of the ALCO facility, the project site was subdivided and redeveloped for a number of industrial purposes including aluminum extrusions, steel making, and tube manufacturing. In 2008, Chautauqua County acquired the property via tax foreclosure for the purpose of encouraging private redevelopment.
The CCIDA, Chautauqua County, Roberts Road Redevelopment Corporation, City of Dunkirk, and New York State Department of Environmental Conservation (NYSDEC) worked together with Peter Krog and The Krog Group to secure the project locally. Peter Krog and Peter Wilson of Sonwil Distribution will own and operate the facility as 320 Roberts Road Freezer, LLC, leasing to Fieldbrook Foods. The $16,000,000 project includes the newest state-of-the art design and technology incorporating an automated high-density racking system with 10,800 pallet positions at 20 degrees below zero and 10 loading docks at 40 degrees.
The CCIDA provided Sales Tax & Mortgage Recording Tax Exemptions along with a 20-year Payment in Lieu of Tax (PILOT) Agreement for real property taxes to incentivize the project. The company will participate in the NYS Brownfield Tax Credit Program in conjunction with the City of Dunkirk’s recently approved Brownfield Opportunity Area, as well as National Grid’s Brownfield Economic Development Program. Rich Dixon, CCIDA CFO, orchestrated project oversight and coordination amongst the project partners. Under County Executive George Borrello’s leadership, Chautauqua County struck a deal with the developer as it pertained to sale of the land and landfill costs.
The new freezer will begin operations this fall. Approximately 150 construction jobs are projected, and 6-10 new permanent warehouse jobs will be created over the next 3 years. Chautauqua County, City of Dunkirk, and the Dunkirk City School District will now each receive real property tax revenue via PILOT payments made to the CCIDA for a property that was not otherwise contributing to the property tax base. In addition, the new jobs will result in purchased goods and services in the local community, generating additional state and local sales tax revenue.
Chautauqua County Executive George Borrello said, “I thank Peter Krog and his team for working with us to make this project happen at this former brownfield site in the city, and in support of our major employer, Fieldbrook Foods. Cleaning up, marketing, and ultimately developing brownfield sites is a priority of my economic development strategy.” Borrello continued, “This is another great leap forward for the City of Dunkirk in continued upward momentum in Chautauqua County.”
Continuing the economic renaissance in and around the City of Dunkirk, this is yet another project in what is becoming a long list of exciting new projects in the local region. Mayor Wilfred Rosas said, “The City’s development department has been working on this project for over two years now. To see this come to fruition is an accomplishment that I am very proud of.” Rosas continued, “This is the result of a collaborative effort between the City, County, CCIDA, and Fieldbrook Foods. This project will create new local jobs and further the economic growth and development in the City of Dunkirk. I would like to thank Peter Krog and his team for taking on this project, as well as Rich Dixon for helping us coordinate this project.”

The Krog Group is known as a regional leader in brownfield redevelopment, believing that the reuse of existing sites can often be the most sustainable and economical approach to development. Peter Krog said, “We are thrilled to be working with Chautauqua County, the City of Dunkirk and Fieldbrook Foods to redevelop the Roberts Road Redevelopment Site, returning a long-time fallow site to productive reuse, providing jobs for the community and helping to sustain and grow businesses in the City.”
Sonwil Distribution provides strategic, focused warehousing, transportation, technology and real estate services. Peter Wilson said, “Sonwil is excited to bring this project online in 2019 in support of Fieldbrook Foods. Sonwil has been working with manufacturers for 70 + years in WNY and around the country to streamline our clients’ supply chain efficiency. With this project we’re utilizing the latest technology for Fieldbrook’s warehouse and distribution needs to insure their long-term competitiveness at the Dunkirk facility.”

About 320 Roberts Road Freezer, LLC
320 Roberts Road Freezer, LLC is owned by Peter Krog of The Krog Group and Peter Wilson of Sonwil Distribution. Peter Krog has developed an extensive portfolio of commercial, industrial, residential and institutional projects across New York State and beyond providing capacity in every major construction discipline. Krog has developed, owns and manages many properties across the region. Recognized by Food Logistics Magazine in 2017 as a “Top Third-Party Logistics Provider,” Sonwil Distribution is a locally owned and operated logistics provider headquartered in Buffalo NY with additional operations in Elmira NY, Carlstadt NJ, Reno NV and Dallas TX.

About CCIDA
The CCIDA is an economic development organization authorized and empowered by the State of New York to make Chautauqua County a better place to work, live, and visit. They facilitate development by attracting new businesses, while promoting the retention and expansion of existing businesses. Assistance in the form of incentives – tax abatements, low interest loans, and bond financing – enhances the opportunities for job creation and retention by our businesses. For more information visit www.ccida.com.