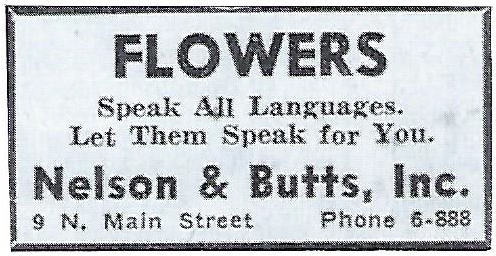 With the holiday season just around the corner, my thoughts about Brooklyn Square naturally turn to the outstanding florist shop, Nelson and Butts, which was located at 9 N. Main Street.  It was a full-service flower shop that led other florists at the time in beautiful window displays.  The window dressers that I recall were young men, identical twins, whose skill was obvious as they changed the displays to match the seasons.  They were masters in their innovations, and the windows were so beautifully and artfully dressed that shoppers would often stop to admire their work.  I always thought of it as an oasis of quiet and beauty along that busy block.

Nelson and Butts windows were meticulously maintained with seasonal flowers and holiday themes.  Christmas brought a decorated tree and banks of red and white poinsettias as well as traditional Christmas figures that graced both front windows, and summer brought its own unique variety of flowers as well as potted plants.  I recall one Easter when the windows were laden with pots of white lilies and other traditional spring blooms and a bevy of real Easter bunnies.  They were delightful to watch, but as time went on, they made short work of stripping all of the foliage and flowers from the lily stalks!

In Art Kinney’s article “A Walk Through Brooklyn Square” in my book, Brooklyn Square, The Lost Neighborhood, and Beyond,” he mentioned Lillian Peterson, the “sweet elderly lady” who was always at Nelson and Butts front counter.  Her husband, Oscar Peterson, worked at Carnahan-Shearers as a clothing salesman.  Art would often stop in to say hello to Lillian and tell her how much he enjoyed the shop’s window dressing.  As Art came to find out, Lillian and her husband managed the Swedish Children’s Home, which later became the Gustav Adolphus Orphanage, from 1927-1947.  Both Lillian (nee Martin) and Oscar came to the original children’s home after the death of their parents and lovingly served the children for twenty years.

When the end of WW II came after the unconditional surrender of Germany in May 1945 and Japan in August 1945, Nelson and Butts, along with other Brooklyn Square businesses, ran a celebratory ad in the September 1, 1945 issue of the Jamestown Post-Journal.  It reads: The Star Spangled Banner. Our Flag, together with those of the Allied Nations, has been carried to Victory in Europe and the Pacific by our brave servicemen and women—ALL HONOR TO THEM.  In celebrating this day of Victory let our heartfelt thanks and prayers go out to all those who have thus brought liberty to a depressed people abroad and maintained that liberty at home.  Keep the flag flying, Nelson and Butts.