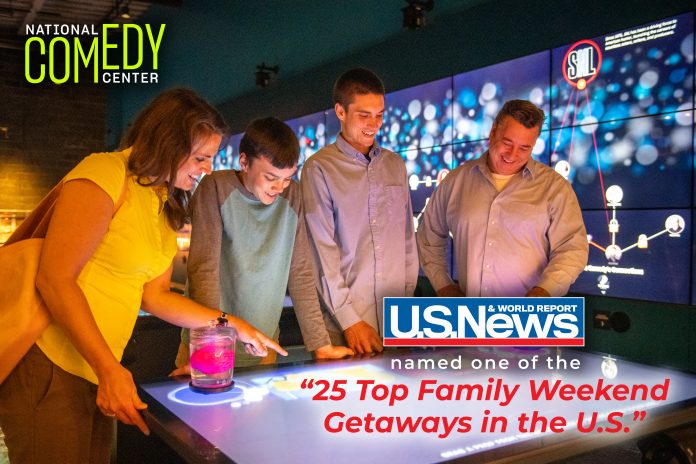 August 19, 2022 — The National Comedy Center, the nation’s official cultural institution and museum dedicated to comedy, was named a “Top 25 Family Weekend Getaways in the U.S.” by U.S. News & World Report and a top destination to explore for “memory-making vacations with loved ones.”

The publication states that “these 25 top weekend getaways across the country guarantee enriching activities for all ages and will inspire your family to enjoy some quality time together,” with these destinations welcoming families “with special experience, affordable lodging and sophisticated dining and entertainment.”

The National Comedy Center is among a prestigious list of major destinations across the country selected by U.S. News & World Report, which also includes Disneyland, Disney Springs at Walt Disney World Resort, snorkeling in Maui, Hawaii, performing arts in New York City, a cruise in Alaska, the Rocky Mountains in Breckinridge, CO, and the San Francisco waterfront.

The National Comedy Center is the United States’ official cultural institution and museum dedicated to presenting the vital story of comedy and preserving its heritage for future generations, as formally designated by the U.S. Congress. Opened in August 2018 in Jamestown, New York, the museum complex offers an unprecedented, immersive visitor experience using state-of-the-art technology, interactivity and personalization.

USA Today named the National Comedy Center the “Best New Museum in the Country” while TIME magazine named it one of its “World’s Greatest Places” ¬– one of only “100 new and newly noteworthy destinations to experience right now” and one of only nine attractions to visit in the United States. Condé Nast Traveler called the National Comedy Center “one of the best museums in the country,” and People magazine named it one of “100 Reasons to Love America.” Comedy industry authority The Interrobang named the design team second on its list of “Innovators Who Changed Comedy.”

In 2021, the National Comedy Center was featured in The New York Times, on CBS Saturday Morning, CBS Sunday Morning and on NBC’s TODAY Show, which called it “the Smithsonian of Comedy.”

Visitors from all 50 states and eighteen countries have given the Center a rare 5/5 raring on TripAdvisor, ranking among the highest in the attraction and tourism industry.

Based on the vision of Jamestown native Lucille Ball for her hometown to become a destination for comedy, the non-profit National Comedy Center showcases comedy’s great minds and unique voices in ways that engage, inspire, educate and entertain. The Comedy Center’s mission is to provide education on the comedic arts in the form of commentary and contextualization of its bodies of work across all eras and genres of the art form.

The National Comedy Center has collaborated with dozens of artists and estates to preserve materials that represent comedy’s significant artistic, social, and political contributions to American culture including collections illustrating the careers of legendary artists like George Carlin, Lucille Ball and Desi Arnaz, Lenny Bruce, The Smothers Brothers and the development of groundbreaking creative work such as sketch comedy series In Living Color, Saturday Night Live and more. Two new multi-media exhibits will recently opened – a multi-screen immersive experience that celebrates the “king of late night,” Johnny Carson, as we mark the 30th anniversary year of his final Tonight Show, and an exhibit that honors and remembers the legendary Carl Reiner during his centennial year. addition of Tiffany Haddish – filling the seat held by the late Carl Reiner – along with Jim Gaffigan, Lewis Black, W. Kamau Bell, Paula Poundstone, Pixar’s Pete Docter, Paul Feig, Kelly Carlin, and more.