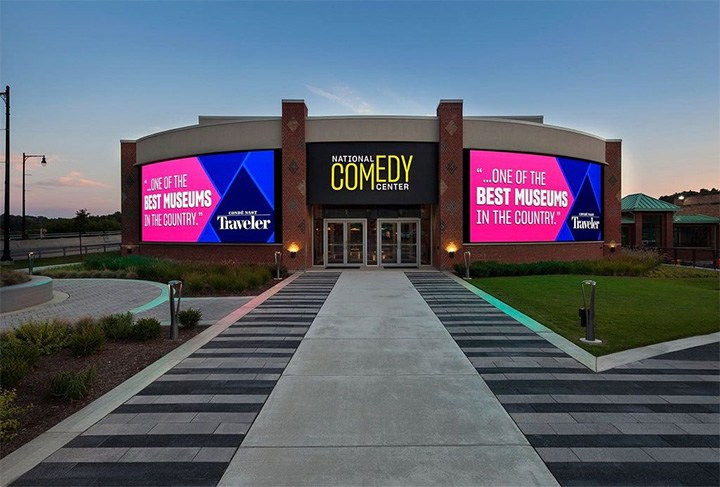 Due to the ongoing COVID-19 situation, the National Comedy Center has announced that it will be rescheduling the 30th annual Lucille Ball Comedy Festival in Jamestown, NY, originally scheduled for August 5-9, 2020, to the same weekend in 2021: August 4-8, 2021, in order to ensure the health and safety of festival attendees, staff and volunteers. This precautionary measure was taken in consideration of CDC, federal, state and regional guidelines for the presentation of large group events.

“It is with tremendous sadness that we make the difficult decision to reschedule our Lucille Ball Comedy Festival – for the first time in our nearly 30 year history,” said National Comedy Center Executive Director Journey Gunderson. “We are grateful for the patience, understanding and continued support of our festival attendees, sponsors, volunteers and staff, and our Jamestown and Chautauqua County community during this challenging time.”

“We do not make this decision lightly, understanding that our annual festival draws attendees from over 40 U.S. states and not only has a direct effect on the revenue of our non-profit cultural institution but also affects the business of local hotels, restaurants, attractions and event venues, and retailers throughout our community. We look forward to presenting an outstanding comedy festival experience here in Jamestown in August 2021, as we officially celebrate the festival’s 30th anniversary.”

Current ticket holders will have their tickets transferred automatically to the same shows and events for the 2021 festival, unless they choose a different option.

Ticket holders will have several options to consider:

Transfer tickets to the same shows and events for the 2021 festival. New ticket will automatically be issued to ticket holders within the next several weeks.
Donate the value of their tickets to the non-profit National Comedy Center as a tax-deductible contribution during this critical time.
Exchange the value of their tickets for a National Comedy Center gift card to be used for admission, membership, future event tickets or merchandise.
Receive a full refund for their ticket purchase by selecting this option by July 15, 2020.

Ticket holders can select their preferred option via the Comedy Center’s Ticketing form at ComedyCenter.org/TicketForm.

Those wishing to purchase new tickets for 2021 festival events, including Jeff Foxworthy and Legends of SNL, without holding existing tickets for 2020, can do so by visiting ComedyCenter.org/Festival beginning Monday, June 15th.

As a further precaution during the COVID-19 crisis, the National Comedy Center will be cancelling its “Comedy Under the Stars” free outdoor movie night series for 2020, which was to feature ten film comedies presented for the local community and museum visitors on the Comedy Center’s jumbo video screens on select Fridays throughout the summer and early fall. The Comedy Center plans to reschedule this series for 2021.

The National Comedy Center does plan to re-open its state-of-the-art comedy museum and Lucille Ball Desi Arnaz Museum this summer with enhanced health, cleaning, disinfecting and social distancing protocols — reimagining museum health and safety with the same spirit, commitment and leading-edge technology with which it reinvented the museum visitor experience — once Western New York is given the green light to re-open cultural institutions and museums (Phase 4).

The 2019 Lucille Ball Comedy Festival featured comedians Sebastian Maniscalco and John Mulaney, and was the largest festival in its history. In 2018, the festival celebrated the grand opening of the National Comedy Center and featured Amy Schumer, Lily Tomlin and a panel of original “Saturday Night Live” performers and writers including Dan Aykroyd, Laraine Newman and Alan Zweibel.