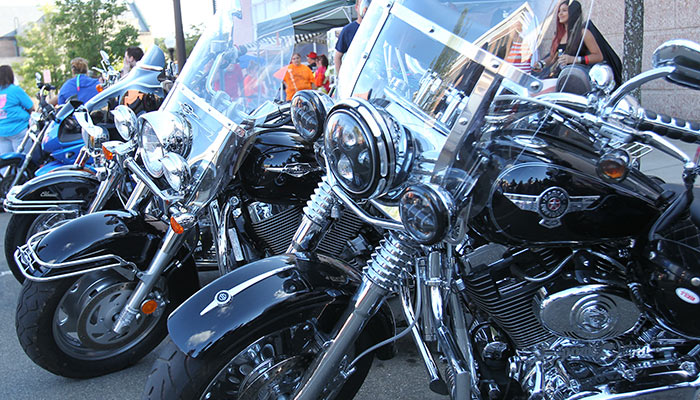 Looking for some post-Lucy-Fest-weekend excitement? Pack up the red wigs and polka dots, and pull out your leather jackets and car wax. Experience Motor Mayhem, one of the largest downtown Jamestown events, second only to the Downtown Jamestown Christmas Parade. Blinding chrome, pristine paint and polished tires will line the streets of Jamestown this weekend for the annual car and motorcycle cruise.

“Motor Mayhem is a little different from most car shows,” Edwin Rodriguez, Jr. said. “It’s more of a fun downtown cruise-in. It’s good for local business and gets people out and about.”

Rodriguez, who grew up in Falconer, participated in the Chautauqua Advancement Project as a CAP intern. This is his second Motor Mayhem as an events and marketing associate for the Jamestown Renaissance Corporation.

Ready to Roll
Antique cars and trucks, modern classics, and many types of motorcycles roll into Jamestown this Friday. Rodriguez estimates that about 3,000 to 5,000 people will flock to Jamestown in a single evening.

The selection and number of display cars and bikes changes each year, but the spectrum stays broad; visitors are sure to see a wide range of expensive and powerful vehicles. Observers will be blown away by the array of cars normally only seen in the Hot Wheels aisle.

Thousands of dollars and countless hours go into the restoration and upkeep of these vehicles, so many only see sunlight for shows and Sunday drives. Don’t be afraid to ask questions; owners’ eyes are sure to light up when others show interest in their prized possessions.

More than Motors
Motor Mayhem originated as two separate events: Downtown Crusin’s Classic Cars show and Thunder in the Streets’ motorcycle show. The Jamestown Renaissance Corporation combined the two, creating a larger event in an effort to maximize attendance and welcome a wider variety of attendees.

“There’s a lot more than just cars,” Lindsey Rensel, a current CAP intern placed at the Jamestown Renaissance Corporation, said. “It’s about the businesses and restaurants too.”

Vendors include Gifts, Décor and More, Bio Dome Project and The Liquid Monkey, as well as others. The Liquid Monkey presents a live glass blowing demonstration, at which craftsmen will turn molten glass into marbles and wineglasses.

If the thought of wine makes you thirsty, take a break from perusing the packed streets to have a beverage. An outdoor beer garden, in partnership with The Wine Cellar, will be located in the Winter Garden Plaza on Main Street. Rest your feet, have a cold one, and listen to local bands perform. Live music at the plaza during Motor Mayhem includes: Two for Flinching, We Speak Canadian and Refuge.

Family Fun
Though owners of the classic cars and souped-up motorcycles frown upon fingerprints on their shiny vehicles, family-friendly activities along Fourth Street provide an opportunity for kids to take part in the mayhem.

Does your little one light up at the sight of big wheels or flashing lights? Let them explore construction and emergency vehicles — as well as other unusual types of transportation — in a hands-on way at the Touch-A-Truck event. Other activities, including bounce houses, will be available.

A Bite to Eat
“My favorite part is the food,” Rodriguez said. Come hungry, because a sampling of Jamestown restaurants will be serving customer favorites right outside their respective locations.

“A lot of downtown restaurants used to stay closed during the event, because there would be food vendors and fair food from outside the area. Local businesses couldn’t compete because the other vendors were out on the street,” Rodriguez said.

Promoting the many vibrant eateries in downtown Jamestown made more sense to Rodriguez than continuing to bring in outside food. Last year the Jamestown Renaissance Corporation decided to approach restaurants in the downtown area about serving food outside. Without the competition of food trucks and stands, about seven restaurants jumped at the opportunity.

“Last year most of them sold out because they had so much traffic: it was so much more successful than we thought. The [restaurants] set up right outside their doors, which gave them a chance to not only sell their food to people at the event, but a chance to remind people where they are,” Rodriguez said. “It gets their food into the mouths and the bellies of the people who live here and visit here.”

Join in the Mayhem
The Jamestown Renaissance Corporation is excited to share the new and improved Motor Mayhem event that highlights downtown establishments and promotes a sense of community. “There’s something for everybody. Come downtown and support local businesses,” Rodriguez reiterated.

Motor Mayhem roars into town on Friday, August 12. Setup will occur throughout the afternoon, but the real excitement takes place from 5 p.m. to 11 p.m. The free event takes place along Third Street, Fourth Street, and some adjoining streets, parts of which will be closed to through traffic for the evening. For more information, call Edwin Rodriguez at the Jamestown Renaissance Center at 716-664-2477 ext. 226, go to jamestownrenaissance.org or visit the 2016 Motor Mayhem Facebook page.

The following streets will be closed from 3 pm to approximately 11:30 pm for Motor Mayhem to operate in downtown Jamestown on Friday, August 12, 2016: