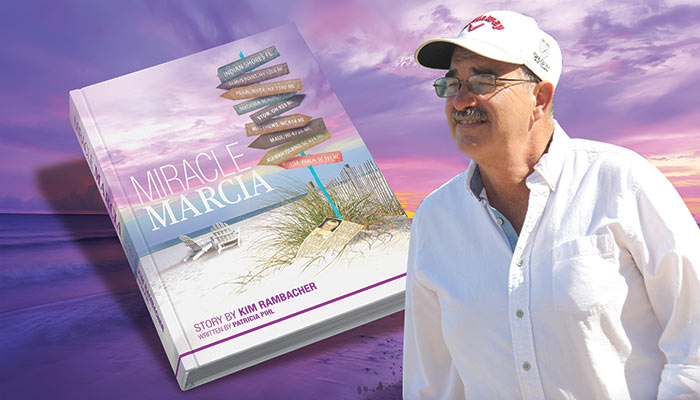 Bemus Point resident Kim Rambacher knows a thing or two about enduring the struggles of a loved one fighting cancer. He has also faced first-hand the challenges involved in long-term caregiving.

But it was the urging of friends – who witnessed his wife’s uncommon strength, optimism, sense of humor and continued love of life – which inspired him to write the memoir, “Miracle Marcia” about their experiences during her 17 year battle with the disease.

The recently released book recounts her reliance on her faith, family and friends to face the physical, spiritual and psychological trials accompanying her fight. “Miracle Marcia” also looks back on the couple’s life – how they met, raised their family and dealt with her sickness. Along the way, it illustrates how his wife changed the lives of others she knew and met as she faced the battle of her life.

As well as honoring his wife’s memory, he wanted the book to be “a source of strength and inspiration for others facing cancer.” He also wanted to tell what he calls “extraordinary” stories surrounding her life.

One account unfolds in the book’s first chapter, “The Beach Letter” which occurs after Marcia’s death when a stranger finds her obituary – the one Rambacher lost on a beach while visiting a friend in Florida. Sitting in church a month later in Bemus Point, an usher hands him an envelope with the missing memorial and a letter from the stranger who found it on the beach just four days later. The letter states, “I return this as a sign from Marcia to her husband, children, mother, grandchildren and siblings that she is with you and always will be.”

In another unlikely event in the book, Marcia’s doctor tells her that there is no sign of cancer on any of her tests, despite the fact that she was in late stage cancer. He can give no medical explanation as to why her tests are negative.

Local author Ned Ward states, “taken singularly, these circumstances would be an oddity; together they make a very compelling story.”

However, it was her spirit, Rambacher says, that would change people. “How she dealt with [it] was amazing.” Describing her faith in God, he adds, “She knew she wasn’t in charge. She touched people with her attitude right up to her last day.”

Since the publication of ” Miracle Marcia” last March, Rambacher has been busy with more than a dozen scheduled book signings locally and in Buffalo and Ohio. He has also spoken on The Family Life Network’s WCOT 90.9 FM and on “Times of Your Life,” with Russ Dietrich and Andrew Hill on WJTN.

“Miracle Marcia” can also be purchased locally at Off the Beaten Path in Lakewood, Falconer Pharmacy, Petals and Twigs, The Bridgeview Market (Bemus Point) and at the Chautauqua Institution bookstore, or directly from Kim on his “Miracle Marcia” Facebook page, as well as on eBook, Xulonpress.com, Amazon.com and BarnesandNoble.com.

Patricia Pihl is a personal historian, the founder of Real Life Legacies, (www.reallifelegacies.com) and the lead writer of “Miracle Marcia.”