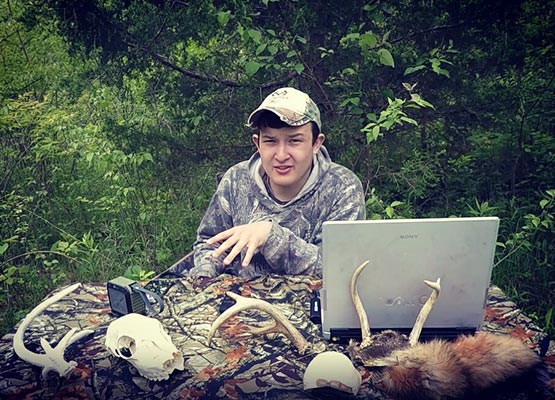 When I was a kid Jack O’Connor was the big name in outdoor writing, and lots of kids saw him as a role model. Today, kids who aspire to be an outdoor writer are hard to find.

I know that’s true because I’m a member of the Pennsylvania Outdoor Writers Association, and we offer a scholarship to college students who are majoring in a field related to outdoor communications. It’s a field where fame isn’t easy to achieve, and fortune is a lot harder. In an increasingly urbanized world where most people have little contact with wildlife, it’s difficult to find qualified scholarship candidates.

As long as we have woods and wildlife we’ll always have professionals who manage them, and people with degrees in environmental fields will always have work. But will the outdoor magazines always be around? Will they have writers who cover the hows and the whys of hunting, fishing, trapping and conservation? With pressures from animal rights and anti-hunting groups, will the traditional hook-and-bullet pursuits even be “a thing” two decades from now?

If Blake Alma has anything to say about it, they will. You might not have heard of Blake yet, but at 16 years of age, he is on a mission. He’s no typical teenager, fighting the temptations other teens face. Drugs and alcohol? He won’t touch any of it. Lack of focus? Every fiber in his body points to single-minded purpose. Peer pressure? His peers get pressured by him.

Instead of being locked into the latest video game, he’s locking in on bait for his next streamside adventure. Instead of being trapped by TV sitcoms, he’s trapping animals for fur and food.

Blake isn’t the teenager trying to figure out who he is. He already knows, and he’s unapologetic. If you frown on hunting, fishing, and trapping, he won’t hesitate to set you straight. Blake Alma is an activist, bucking the trends, taking on challenges, giving fits to those who oppose hunting. Even people who disagree with him have to admire him.

He’s an outdoorsman, through and through. A couple of years ago he set out to become an outdoor writer and broadcaster, and he has achieved those goals while still in high school. He has already written several books—short, hard-hitting, and to the point. At 16 he’s not as polished as he would be if he had a journalism diploma in his game bag, but there’s nothing wrong with education coming largely by experience anyway. He’s driven by passion, curiosity, grit and faith.

Blake’s weekly online radio program is called “The Outdoorsman’s Art” and he uses social media to build his listener base, now at 25,000 monthly. “The Outdoorsman’s Art” covers hunting, fishing, hiking, camping, trapping, survival, and creation itself. Blake sees in creation the signs that it has a Creator. In league with some of history’s greatest minds, he makes the age-old “argument from design”—that a watch could not exist without a watchmaker. He is as passionate about his faith as he is the outdoors. It’s not just a show about the outdoors, it’s actually recorded in the outdoors, where Blake is most at home.

Blake lives in the Cincinnati, Ohio area, the oldest of eight children in the family, and is home schooled at the twelfth grade level. His future is uncertain, but whose isn’t? With no college in his plans, he’s busily promoting his program, currently on 19 streaming radio stations, and looking for sponsors.

He feels a sense of urgency to reach out to his own generation. He says, “The only connection that my generation has with nature is television and it is my job to change that!” Some people may think it’s an overstatement to say the younger generation depends on television for its connection to nature, but I see it even in rural areas.

What’s ahead for Blake Alma? He’ll refine his ideas, learn how to debate with grace, add more and better books to his list of works, and keep building his listener base. What will never change is his vision—a fierce advocacy for the rightness of outdoor pursuits. Blake is making his mark, and as his mark gets broader and deeper, I hope lots of teenagers catch his vision.