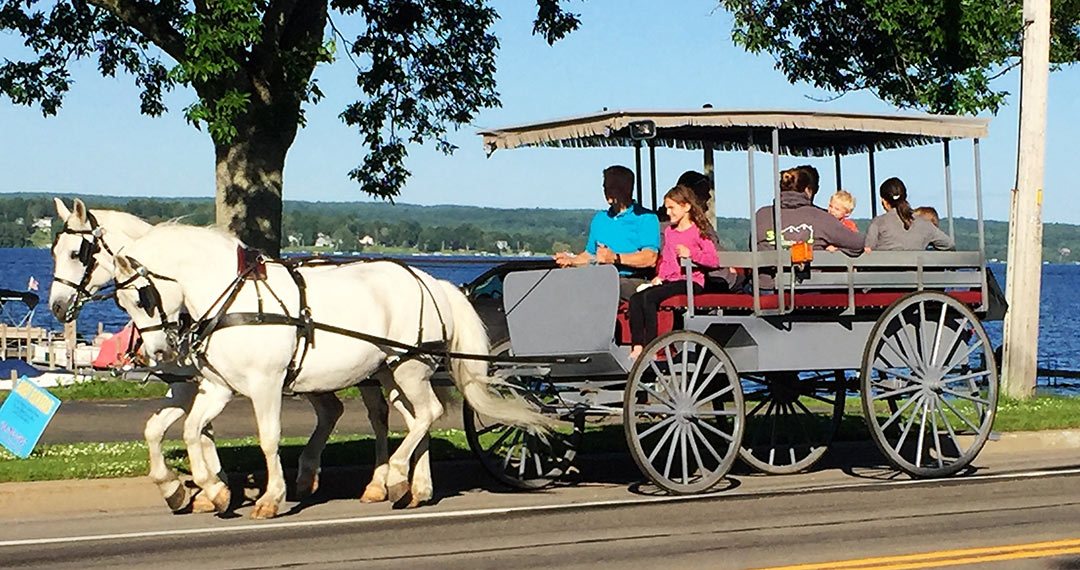 Magic Moments Carriages is 34 years strong, strong as a horse, you might say. Owner Dennis, “Denny”, Wright began the side business after a friend asked him to add some style to her sister’s wedding by driving the new bride and groom to their reception in a two-person buggy. He said yes, built a custom buggy, hitched up the family horse and the business was born.

Denny, like so many who have grown up in rural America, was raised around horses. He helped his father log in the Pennsylvania woods as young boy. He, his brothers and father were well known at the local pony pulls for having champion teams.

Magic Moments Carriages has grown to include a variety of carriages and wagons for all occasions. From an elegant vis-à-vis four-seat carriage, to a 16-person wagon for tours. Engagement rides, weddings, birthday parties for all ages, festivals and corporation events fill the annual calendar. Magic Moments Carriages is a fully insured, family business. Wright’s daughter, Erin, and son, Patrick, both took their turn at covering whatever was needed to be done. From putting on a tuxedo and delivering a bridal party to the church to giving a great grandmother a ride for her 90th birthday and every other kind of event in between. Many times, Denny depended on them to help him handle two or more events in one day.

No matter how hard Denny works, the stars of the business are the horses. That’s what people want to see, touch and experience. While safety and customer service are always top of mind, fun is the focus. Over the years several horses have covered events, especially if two teams were needed. However, Denny’s Morgan horse team of brothers’ Magic and Challenger, carried the load for many years. Among “horse people”, owners are sometimes known more for their horse’s name than by their own. Denny was known to many as Magic or Challenger’s owner – for different reasons. Magic was a beautifully built horse. He had a very hard time going slow anywhere, let alone standing still. Denny says,” the only reason Magic lived to be 33 years old was because I owned him, anyone else would not have put up with him.” Magic had the human equivalent of ADHD. He loved people, he enjoyed going places, but he was a handful. Challenger, on the other hand, was a terrific horse; beautifully built, smart, and attentive. He would do whatever you asked of him – from any horse show class to logging. Challenger was 28 years old when he passed in 2014. Magic passed 18 months later.

When the Morgans were retired a few years before their passing, the new team of Luke and Lady stepped up. They are Haflinger Arabian crosses. They are full brother and sister. Luke loves people, especially children. Lady is the “Challenger” of the team. She puts up with people but prefers treats. They can be seen each Saturday night through July and August at Webb’s Captain’s Table Restaurant in Mayville, NY where the restaurant sponsors complimentary rides between 6 and 9 PM. Come on over to Mayville, have some dinner, and say “nay”.

Magic Moments Carriages is from Bear Lake, PA. Call (716)450-1795 or message them at http://Facebook.com/magicmomentscarriages/ to schedule them for your event.

Lakewood Apothecary Celebrates 14 Years of ‘Making Time For You’

Know Your Baby Before The Stork Comes By