Voters could donate $1.00 for one vote, $5.00 for ten votes, or a jar of peanut butter or spray cheese for five votes. Over $400 and over 100 jars of peanut butter were donated to the shelter from the contest. Pictured from left are Peggy Young, RN, Brian Papalia and “Dot” from CCHS, Stephanie Reichardt, and Deb Darling. “Dot” came to the Lutheran Campus with Brian as part of the Expawditions program at the shelter.

Expawditions is a program designed to give animals a day off from the kennel environment and get them into the real world. It also gives people the chance to get some dog time, even if they don’t have a dog of their own. Call the Chautauqua County Humane Society at 665-2209 to learn more about Expawditions. 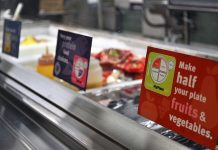 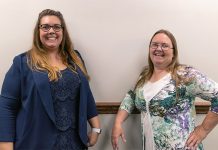 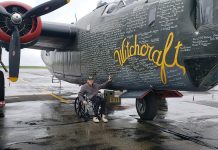