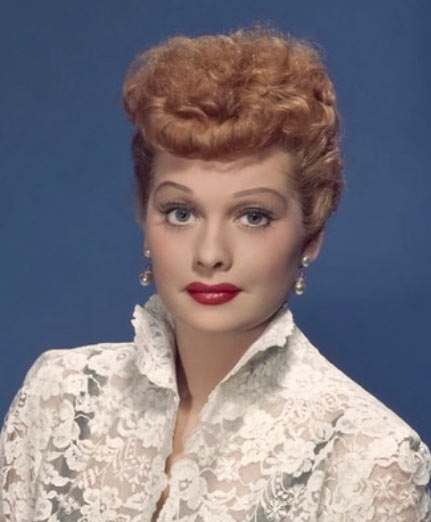 First let me say I am not an expert on the life of Lucille Ball. The information here is based on her autobiography, “Love, Lucy”, and local newspaper reports. Whenever I talk about Lucille Ball with local residents whose families have been here a few generations, I always hear an anecdotal story about her. Many times, they are not complimentary. I have to say I have come to sympathize with Lucille (her preferred name) and admire her strength, energy and smarts.

Lucille was born in Jamestown August 6, 1911, on Stewart Ave. at her mother’s parents’ home. Her maternal grandmother, Florabell Hunt, was a well respected midwife. Lucille’s parents, Desiree (DeeDee) and Henry (Hank) Ball, left shortly after her birth for their home in Montana where Hank was setting up new telephone lines. What a job! In 1915 Hank contracted typhoid fever and quickly passed away. This was the first of many significant losses in Lucille’s life. Her mother was five months pregnant with Lucille’s brother Fred. Once again, the little family came to Jamestown (Buffalo St.) to bury Henry, mourn his death, birth Fred and find a way to carry on. Desiree was only 23 years old. Lucille’s grandparents Fred and Florabell Hunt were her lifeline for as long as they lived. There is not enough space to cover all the trials in her early life in this article. I suggest if you want to know more you read her autobiography or take the Lake View Cemetery tour during Lucy Fest. Go to the festival website to get your tickets.

Lucille’s mother remarried in 1918 and promptly moved to the Detroit area with her new husband, Ed Peterson. Lucille was sent to live with her new grandparents, George and Sophia Peterson. The Peterson home was a stark contrast to the happy-go-lucky life at the Hunt home. Ed and DeeDee returned 3 to 4 years later. Lucille’s memories do not match the records exactly. The expanded family
moved in together at their beloved Celoron home. It was the Hunt’s first real home. It was about 1922. Lucille was 11 years old. She loved it there. Her favorite flower blossomed out her bedroom (who own bedroom!) window. She always loved lilacs from that point on.

The family went through more losses and eventually ended up back in Jamestown by 1928 at the Wilcox apartments on 5 th St. and Prendergast Ave. at this point Florabell had passed and DeeDee and Ed were headed for a separation. Lucille tried to attend Jamestown High School but had difficulty with her attendance and attention to schoolwork. She became a regular ticket buyer at Shea’s Theater on 2 nd St. and the Palace on Third St. She was even in a show at the Old Nordic Temple, where the modern Post Office building is today across from JHS. Other places she and her family left their mark were the train station – now the National Comedy Center, Duffy’s Cigar Store (currently the BWB building space at Washington St. and 3 rd St.) where she worked a short time before she went to NYC the first time at age 15, plus her family shopped at the City Meat Market and the Abramson-Bigelow store on the NE corner, – when they had enough money. Her mother worked many years at the Marcus Co. fine clothing store on the east side of Main St. between 2nd and 3rd Sts. She sold hats. Lucille always had the latest fashions and DeeDee was a good seamstress. It’s said Lucille, as a teen, wore the first woman’s trousers in Jamestown.

Lucille roamed all over downtown Jamestown in the few short years she lived there. She frequently came back after her success grew to see the Peterson’s and close girlfriends. She went to Hollywood in 1933 and within a few short years was able to move her beloved family out to the west coast to be with her. She was always searching for a large happy family. I suggest you read her autobiography, you will gain a great appreciation for her struggles and triumphs. I would have loved to have shared a cup of coffee and a chat with her!