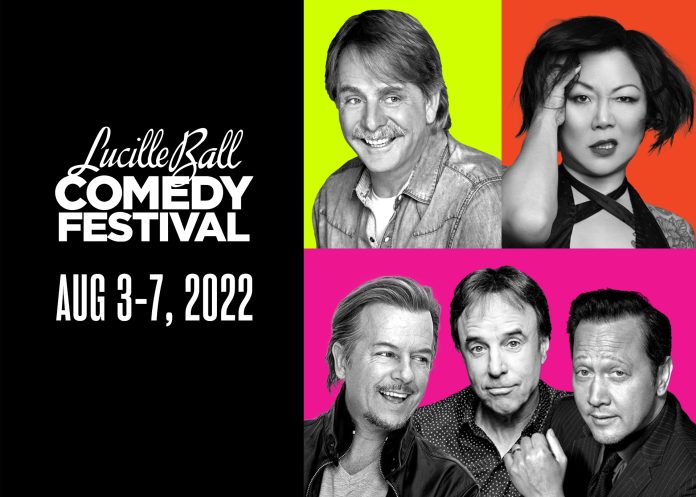 ho’s coming to town this week?

“It just might be a redneck,” if you like laughing with Jeff Foxworthy, one of this year’s top-billed headliners at the 2022 Lucille Ball Comedy Festival—Wednesday through Sunday this week—August 3 through 7. And there’s much more for everybody else, too.

The National Comedy Center, as always, will be spreading the festival’s most exciting events and star-studded appearances across sixteen premier venues, both indoors and outdoors, all around Jamestown’s historic downtown district.

A Great Welcome Back!

“It’s hard to describe how incredibly important it feels to bring the joy of live and in-person comedy back to Jamestown after such a challenging period,” Comedy Center Executive Director Journey Gunderson told the Gazette last week in the runup to Wednesday’s opening night. The entire festival lineup and more is available online for planning your visits at comedycenter.org.

It all starts on Wednesday evening, August 3, with free movies at “Lucy Under the Stars” on the Comedy Center’s big outdoor screens. Lucy fans can also go to the Reg Lenna Center For The Arts for the Stand-Up Showcase of rising comics from across the nation.

According to the event website, “Each performer will bring their own unique brand of humor to the stage and take the audience on a journey of laughs from observations to silly to irreverent, and best of all, funny!”

“It’s a wonderful opportunity to sit together and laugh together once again,” Journey added. Everyone is looking forward to this year’s 30th annual festival, a happy ending to the long, two-year pandemic pause. The welcome-back, all-star lineup is packed with more than 50 live events.

Thursday, August 11, will deliver nearly a dozen great events. Gazette readers who plan to see legendary stand-up comic Margaret Cho at the Reg Lenna Center For The Arts can start with a free, 5:30 Block Party at street level in front of the Reg where Margaret will take the stage at 7:00. The block party promises to deliver great live music, beer, wine, food trucks, and more.

The day will also offer cruises on a historic steamboat, the Chautauqua Bell, one of the last of its kind still afloat and sailing in North America. Also on tap, lunch, Desi, and Comedy Late Night in the Tropicana Room, a special Members Only event at the Comedy Center, and another free movie evening of Lucy Under The Stars.

Gary Hahn, the Comedy Center’s vice president for marketing and communications is delighted with this year’s return of the Comedy Festival. “We’re just thrilled to be back live and in person,” he said. “We’re seeing a very nice rebound from the pandemic.” True to the Center’s mission, Hahn added, “We always want to bring in a variety of the biggest names we can, and of course this year a lot of the country’s best rising standups.”

But in addition to the Festival, the Comedy Center is also continuing to grow in other ways, according to Hahn. “We’re very pleased with last week’s opening of the Carl Reiner exhibit, marked by last week’s ribbon cutting by Carl’s children, Rob Reiner —Archie Bunker’s “Meathead” son-in-law—Carl’s daughter Sylvia Anne Reiner, and his son Lucas Reiner.

The next exhibit, slated to open soon, Hahn added, will be the remarkable, new Johnny Carson immersive experience.

On Friday, August 5, at 7:00 p.m., Jamestown’s Northwest Arena will give its stage to Jeff Foxworthy, billed everywhere as one of the world’s most respected comedians. As part of one of the most successful comedy tours of all time, The Blue Collar Comedy Tour, Jeff and his band of comics toured the country for years to packed houses.

But, as the National Comedy Center wants everyone to know, “let’s not forget that Jeff’s given rednecks more jokes than they know what to do with…” After all, anyone in rural Chautauqua County will recognize directions to their house that start with “…turn off the paved road” as a hint that even they just might be a redneck.

Jeff’s two Friday night shows, 7:00 and 9:30, will be all about The Good Old Days. Nearly a dozen more events and shows, including a block party at the Comedy Center, more Comedy Late Night at the Tropicana, and much more will round out Friday’s lineup.

On Saturday night, August 6, this year’s Comedy Festival will celebrate the 45th anniversary of Saturday Night Live by reuniting three of SNL’s most popular performers: David Spade, Rob Schneider, and Kevin Nealon. It will be an unprecedented and totally unique stand-up comedy show.

And once again, the Tropicana Room will feature more music, comedy events, and Comedy Late Night.

As the Lucille Ball Comedy Festival winds down on Sunday morning, August 7, the National Comedy Center will once again open its doors to provide more of their award-winning, unique, and interactive museum experience. The famous Lucy Desi Museum and gift shop will also open at 10:00.

And for one more opportunity to experience scenic Lake Chautauqua, consider the Chautauqua Belle Brunch Cruise. Go to McCrea Park and “see the Chadakoin River the way Lucy would have when she took the steamboats.”

“Along with seeing Jamestown and Celoron from the River, guests will hear about the local history and about the area that Lucy loved and grew up in. Menu includes bacon & eggs, sausage, home fries, homemade bread, assorted pastries, and summer salad. Best dressed Lucy will win a grand prize! Guests should arrive 15 mins prior to departure.”

The Comedy Festival makes a strong contribution to the entire region, according to its organizers.

“Every day that the Comedy Center is in business we are positively impacting the local economy,” Journey Gunderson explains proudly, “from the meals we serve to our motorcoach groups, the visitors who spend money here in our hotels, restaurants, and shops and to the dozens of local staff we employ here.”

“Visitors quickly discover you cannot consume this museum experience in one minute.” With the local community in mind, Journey added, “we wanted to design The Comedy Center for repeat visitation, and we’ve done just that. Everyone who leaves says ‘Wow! I absolutely need to go back, I could spend days here,’ and very often they do.”

“This one of the best and most respected comedy festivals anywhere,” Journey told Gazette readers, “and it’s right here in your own back yard.”

The Jamestown Gazette joins this year’s Lucille Ball Comedy Festival, the National Comedy Center, and the Lucy Desi Museum in welcoming the tens of thousands of guests from far and near to enjoy the entire Greater Jamestown region this year—and all year long.