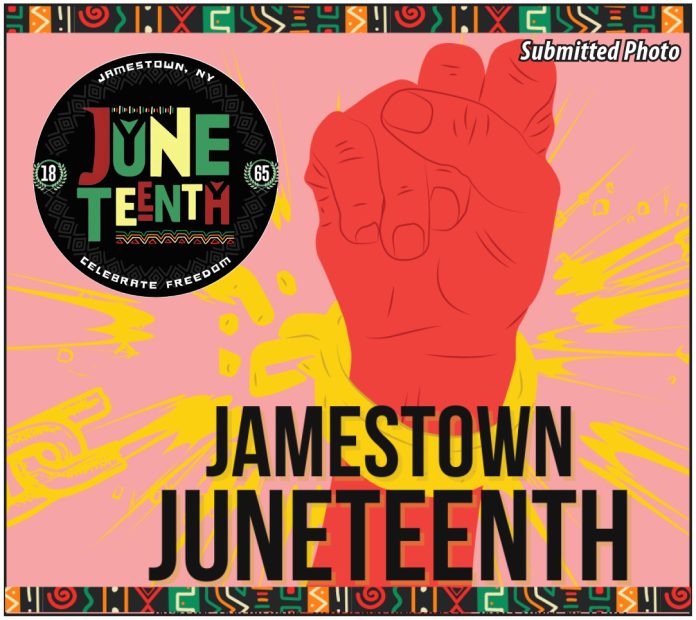 The 2022 Juneteenth of Jamestown festival promises a full weekend of celebration June 17-19 to commemorate the end of slavery in the United States. All events, with the exception of a free movie night June 17 in collaboration with the National Comedy Center, will take place at Jackson-Taylor (formerly Chadakoin) Park on Washington Street. The festival will open officially at the park at 11:00 AM Saturday, June 18 with the presentation of a proclamation by Mayor Sundquist and brief remarks on the history of Juneteenth. The evening previous, June 17 at 7:00 PM, the popular film Sister Act 2 starring Whoopi Goldberg will be shown outdoors in front of the Comedy Center. Guests are invited to arrive beginning at 6:00 PM. Bring lawn chairs or blankets for the viewing. Food and drink will be available and a basket raffle will be held.

Juneteenth has been celebrated annually in Jamestown for more than twenty years although the covid pandemic required cancellation in the year 2020. Within the African American community it has been celebrated in various forms since 1866. In 1980 Texas became the first state to legalize Juneteenth as a state holiday. Last year on June 17 President Biden signed legislation designating Juneteenth a federal holiday. It is the first new federal holiday since the designation of Martin Luther King, Jr. Day, signed into law in 1983 by Ronald Reagan.

Juneteenth recognizes the nineteenth day of June 1865 as the effective end of chattel slavery in the United States. Lincoln had signed the Emancipation Proclamation in 1863 freeing all slaves held in bondage within states under rebellion,
but slavery had continued in parts of Texas even after Lee’s surrender at Appomatix. On that day in June federal troops under the command of General Gordon Granger arrived at Galveston Bay, Texas and delivered General Order Number 3: “The people of Texas are informed that, in accordance with a proclamation from the Executive of the United States, all slaves are free.” Slavery was definitively abolished in December 1865 through ratification of the Thirteenth Amendment.

Considered the longest running African American holiday in the country, Juneteenth is traditionally celebrated with picnics, parades, games and music. “Our mission is to celebrate and to educate,” says Third Ward councilwoman Regina Brackman, chair of the Juneteenth Planning Committee. “I cannot be more excited about the interest in the community and the collaborations we have made with individuals, businesses and agencies to make this festival a success.” Juneteenth is a celebration of African American culture and a visible means, validated by federal holiday status, to instill pride in African American youth.

This year’s Jamestown festival has built upon its long local history and the commitment to its preservation by former councilwoman Vickye James, who, for most of those years, administered the festival. Vickye passed away unexpectedly in the spring of 2021. Responsibility for the planning and direction of the Juneteenth celebration has since been assumed by Ms. Brackman. The Parks Department under the direction of Dan Stone last year constructed a formal gathering place in a corner of the park in honor of Ms. James. It is here that the opening ceremony will take place.

The schedule of events on Saturday includes the popular 3 on 3 basketball tournament, often featured at previous Juneteenth celebrations. Tournament organizer, Francisco Lantigua, is a former Juneteenth competitor. Games will be played on the park’s four basketball courts adjacent to the pavilion. The tournament begins immediately after the opening ceremony and concludes on Sunday with a presentation of trophies to the winners. Players will compete in two age brackets: 12-16 and 17 and older. All interested may form a team and arrive at Jackson-Taylor Park in time for the competition. There is a thirty dollar entrance fee for each team.

Music will be supplied by Jamestown disc jockey Alex Lantigua, brother of Francisco. Alex is planning an eclectic mixture of “old school” music (60s and 70s) to be played until 6:00 PM Saturday and resume Sunday afternoon. “Kid friendly,” Alex advises.
Saturday afternoon will feature children’s carnival type activity including a bounce house/slide, face painting, and balloon twisting hosted by Eventz by Scott. Also, a coin search. What coins might you find buried in sand within a limited time period? Members of the Audubon Society will conduct guided tours of the Riverwalk at the edge of the park alongside the Chadakoin River. Infinity Performing Arts, the Jamestown Community Learning Council (JCLC) and the Prendergast Library will each host tables with appropriate activities. Jamestown fireman Matt Coon will explain the workings of a city fire truck parked on the premises.

Vendors, both food and craft, and a concession stand staffed by volunteers will operate throughout the weekend. Proceeds from the concession stand support the Juneteenth Scholarship Fund. Several JHS graduates have applied for scholarships. Winners will be named at the close of the festival Sunday early evening.

Buffalo based singer and entertainer Marsha McWilson will take the stage at 6:00 PM to close out Saturday’s programming. 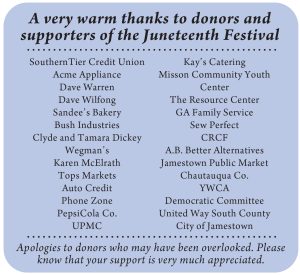 A Sunday Morning Worship Service followed by a continental breakfast begins at 9:00. Games and vendors continue through the afternoon. At 3:00 PM the festival will close with a Gospel Fest, coordinated by popular Jamestown musician Steve Davis and featuring some of the city’s finest vocalists.

The Board of the Juneteenth Planning Committee is committed to creating a significant annual cultural event in the community.

Bigger and Brighter: The Yassou Festival is Back!