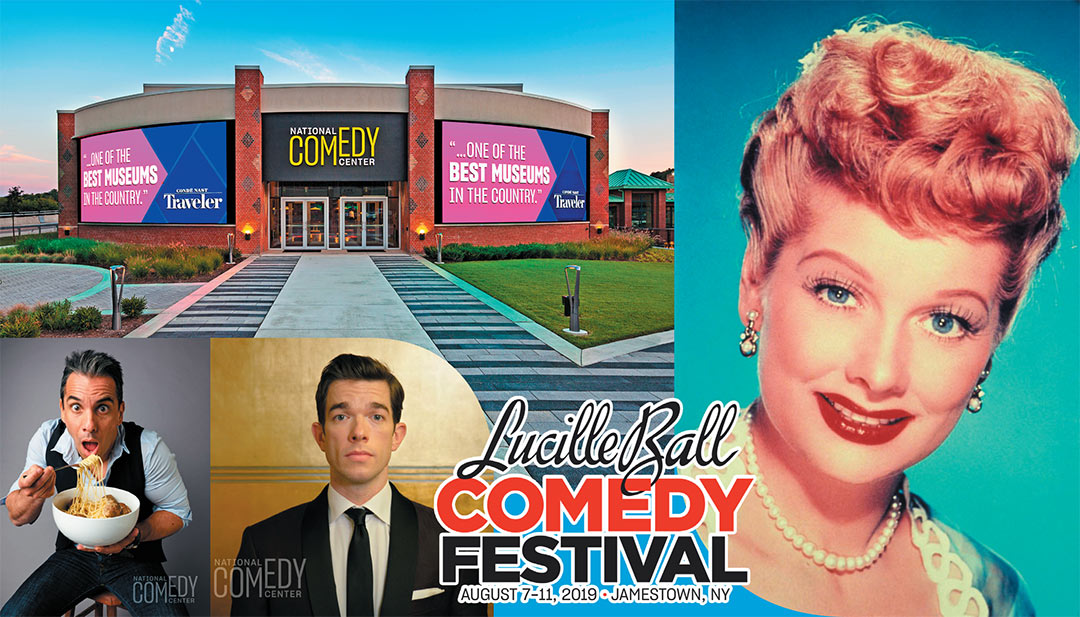 “I love Jamestown,” Comic Lewis Black told the Jamestown Gazette last week in a pre-festival event at the National Comedy Center’s Hologram Theater. He offered a class in StandUp Comedy – ‘Standup BS with Lewis Black.’ “I Love it every time I come to Jamestown,” Black aid. “So many great people here!”

The full 2019 Festival runs from Wednesday, August 7th through Sunday, August 11th, marking the first anniversary of the opening of the National Comedy Center complex in downtown Jamestown at 203 West Second Street.

This year’s Lucille Ball Comedy Festival at the National Comedy Center – and all across downtown Jamestown – is slated to become the biggest festival week ever, with four headliner shows lighting up the stage at the Northwest Arena over two nights, Friday and Saturday, August 9 and 10. Dozens of other events at nearly a dozen venues will stretch from Jamestown to Lucille Ball’s hometown, Celoron, New York, and the celebration of comedy that kicked off last week at the world famous Chautauqua Institution.

Comic John Mulaney, known for his Emmy Award winning, hilarious Kid Gorgeous and much more, called “One of the best stand-up comics alive” by Entertainment Weekly, will take to the Northwest Arena stage on Friday night, August 9, at 7:00 and 9:30.
On Saturday night, comedian, actor, and best-selling author, Sebastian Maniscalco, opens at 5:00 and 8:00 p.m. at the Northwest Arena as part of his record breaking, national “Stay Hungry” tour. Esquire Magazine calls him “one of the funniest comedians working stand-up today.” Maniscalco enjoys a Chautauqua County connection through his co-host, Fredonia resident Pete Correale, on Sirius XM satellite radio’s Raw Dog Comedy.

“The City of Jamestown has been a fantastic partner in this year’s festival,” Journey Gunderson, National Comedy Center Executive Director, said. “First, the city is facilitating the festival through the Downtown Programming Initiative, using New York State grant funds to support bringing John Mulaney to town. It is part of Jamestown’s commitment to help boost our downtown arts programs. But there’s still more,” Gunderson said.

“Just pulling it off at all would be impossible without the more than 300 volunteers who give so much of their time and effort,” Gunderson said. “Individuals and an increasing number of businesses are volunteering. Some businesses have sent entire workforce teams. It is a great team-building opportunity.”

The Comedy Center is billing it as “A party like no other!” Outside of the Reg Lenna Center For The Arts, the city’s army of volunteers will be putting on three big block parties on Thursday, Friday, and Saturday evenings starting at 5:00 p.m. The parties are free, the city is closing the streets, and everybody can enjoy music by The Untouchables Band. On the street, block party-goers will also find food trucks with oriental and farm-fresh cuisine, local bakery desserts, beer, and wine.

On Thursday, the block party precedes the 7:00 p.m. Stand-Up Showcase, featuring comics Matthew Broussard, Rhea Butcher, Zainab Johnson & Lachlan Patterson whose credits include Conan, Fallon, Colbert, Letterman, Leno, Last Comic Standing and more. The Showcase promises unique brands of humor to “take the audience on a journey of laughs from observations to silly to irreverent, and best of all, funny!”

Party at the Reg

Heather Felton, House Manager, Director of Hospitality at the Reg Lenna Center for the Arts, told the Gazette, “This $5 million renovation at the Reg is here for everybody to enjoy. We want to make art accessible to everybody in Jamestown.” Felton said that even a week before the festival, they have seen “people in town, from all over the country.” Felton invites everybody to the Reg’s presentation of Stand-Up Showcase and the Block Parties at their front door.

Len Barry, Director of Marketing at the Reg, added, “This is a great time to show off what we have to offer. Come on out and celebrate Jamestown!”

Friday and Saturday, August 9 and 10, promise to make Jamestown and Celoron stars of the 2019 Comedy Festival for all the world’s visitors to enjoy.

Lucille Ball’s Hometown Tour is a popular, guided bus tour led by a friendly, savvy, and quick-witted step-on guide. Tour-takers visit places that mattered to Lucy in Jamestown and nearby Celoron. A visit to the house where Lucy was born and grew up, and much more, are special highlights of the approximately 1hour 45minute tour. Lucille Ball’s Cemetery Tour on August 9 and 10, at Jamestown’s scenic and historic Lake View Cemetery, visits with some of Lucy’s childhood friends and mentors for a sense of who she was in her early years. The tour is billed as a chance to learn “how living in and around Jamestown helped motivate Lucille Ball’s future success.”

Diane Vincent and Rhonda Medina, AKA Lucy & Ethel, return to Jamestown for their 20th smash year of The Lucy &amp; Ethel Show on August 9 and 10 at the Robert H. Jackson Center. The Comedy Center says, “Grab your cowboy hats, boots and bandanas and join Lucy & Ethel for their Rootin’ Tootin’ Western Revue that can only be seen in Lucy’s hometown of Jamestown, NY! (Western wear is welcome!)

No festival is complete without food, and Lucille Ball’s comedy featured some of the best and most outrageous. Lucy and Ethel’s famous Chocolate Wrapping caper in the “Job Switching” episode is one of the comedy world’s greatest classics. The Comedy Center says, “You’ve seen Lucy & Ethel’s attempt, now try your hand at conveyer belt chocolate wrapping.” Festival goers are invited to step up to the sweet challenge at the National Comedy Center.

The other great classic among Lucille’s food adventure episodes is her 1956 Grape Stomping affair, called “one of the most iconic comedy scenes in I Love Lucy and all of television history.” The National Comedy Center asks festival guests “How much juice can you make?” Visit the Comedy Center on Friday, August 9 at 5-9:30 p.m. and on Saturday, August 10 at 4-8 p.m. and find out.

No comedy festival is complete without a serious look at the “bluer side” of comedy. At 7:30 p.m. on Wednesday evening, August 7, the Robert H. Jackson Center will host an exploration of the historic 1978 Supreme Court verdict upholding the FCC’s first indecency policies banning George Carlin’s “seven dirty words.” A panel discussion will explore the case and its impact on media and comedy, both then and today.

Since food played such a starring role in some of I Love Lucy’s landmark episodes, consider taking one more bite of comedy at the Tropicana Room on Thursday, August 8 at 11:30 a.m. for Tropicana Lunch: Hometown History – Lucy In Jamestown.

The Comedy Center invites luncheon guests to “Learn about Lucille Ball’s Jamestown roots during an illustrated talk featuring exclusive archival content and intimate local memories. This event is co-presented by the Fenton History Center and the National Comedy Center.”

The Jamestown Gazette invites all of our readers to help Jamestown say “Thank You!” and “Welcome to Jamestown” to all of our nationwide and worldwide guests. Jamestown can become known as the National Welcome Center.