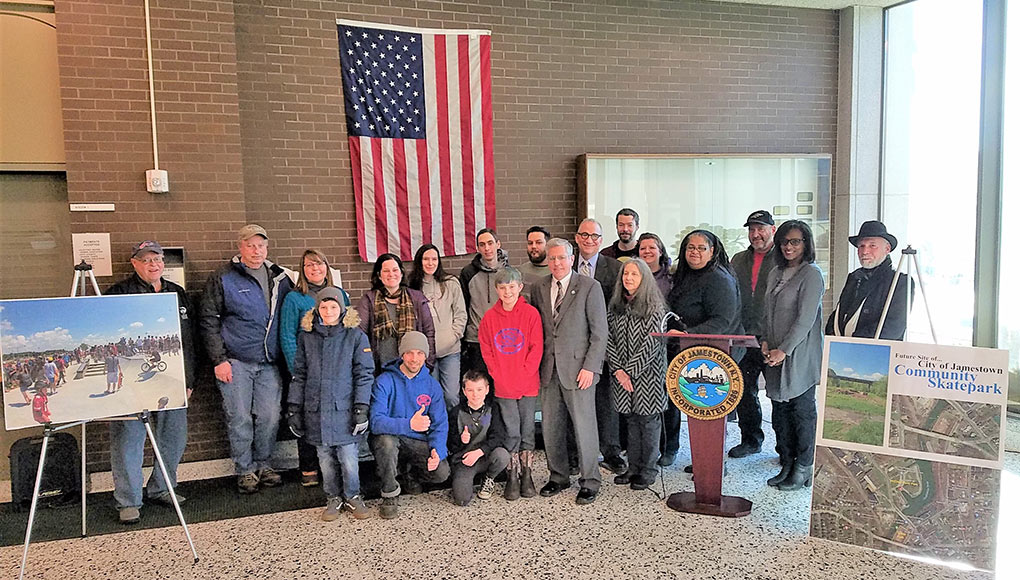 The City of Jamestown and the locally-driven Jamestown Skatepark Project have been awarded a Built to Play Skatepark grant of up to $250,000 in matching funds.
Built to Play Skatepark Grants are made possible through a partnership between the Tony Hawk Foundation and the Ralph C. Wilson, Jr., Foundation.
The up to $250,000 award requires the Jamestown community to raise at least $50,000 in local matching funds, but includes ongoing support and guidance from Tony Hawk Foundation staff. THF has been assisting local groups in the U.S. to create free, public skateparks since 2002, and to-date has helped open 556 skateparks in all 50 States.
The skatepark would be a poured concrete structure. The proposed location would be the site of the former Jamestown Trolley building between the Chadakoin River and the West Third Street to Fairmount Avenue section of the Greater Jamestown Riverwalk, fronting Fairmount Avenue. The location is directly across from 8th Street just
before the Fairmount Avenue Bridge and down the Chadakoin River from the McCrea Point Park Boat Landing.
The Tony Hawk Foundation is a charitable, non-profit organization established in 2002 by its namesake, professional skateboarder Tony Hawk. THF promotes and provides advocacy training and funds for high-quality public skateparks in low-income areas throughout the United States that promote healthy, active lifestyles, and to International programs that enrich the lives of youth through skateboarding.
The Ralph C. Wilson, Jr. Foundation is a grant-making organization dedicated primarily to sustained investment in the quality of life of the people of Southeast Michigan and Western New York. The Foundation has a grant-making capacity of $1.2 billion over a 20-year period, which expires January 8, 2035. This structure is consistent with
Mr. Wilson’s desire for the Foundation’s impact to be immediate, substantial, measurable and overseen by those who knew him best.