Each year the proceeds of the festival benefit a scholarship award for a local Black American student who is a graduating high school senior pursing their higher education through college, trade school, apprenticeship, or a certificate program.

“The tradition of awarding a scholarship each year is a key part of the Juneteenth celebration,” stated Regina Brackman, chair of the planning committee. “Being able to give back and help support students from our community is what it is all about.”

Juneteenth is sometimes called Freedom Day, as it historically marked the freedom of the Black American population. As part of their scholarship application each student prepared a personal response to the meaning of freedom. 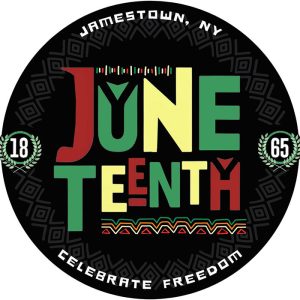 “Through their own definitions of freedom, each of these students help us to celebrate the historical context of Juneteenth,” stated Alize Scott, scholarship committee chair. “At the same time their responses also ask us to consider the promises of freedom not yet fulfilled in the U.S. today.”

In his statement Edwards wrote, “Freedom in general, for all people is conditional to when they can live unapologetically; when one’s life is not dictated by the opinions and actions of others, one is liberated from all the hate and inequality the world can throw at them.”

“My ideal version of freedom is being able to be my authentic self safely,” shared Perez in their response. “Our American freedoms at the current moment aren’t where we need to be; however, I am ready to fight for a world where my freedoms aren’t the bare minimum.”

Finally in his statement, Taylor wrote, “Life, liberty, and the pursuit of happiness may be important factors leading to the state of freedom, but simply having them can not make you free. Being free isn’t as simple as being happy or making your own way in life, it has a deeper meaning.”

Each student was awarded a $1,000 scholarship to assist with the costs of attending college in the fall; Edwards has been accepted to SUNY Fredonia to study Cooperative Engineering and Environmental Science, Perez to Jamestown Community College majoring in Art, and Taylor to St. Bonaventure University majoring in political science.

Juneteenth commemorates the emancipation of Black Americans. Although the emancipation proclamation was signed in 1863, it was not until almost two and a half years later that the news reached Texas on June 19, 1865, and the last enslaved people finally received the news that they were free. The following year the first of what become the annual celebration of “Jubilee Day” was held on June 19 in Texas. The tradition ensued and spread across other parts of the country, annually celebrating Black American culture and freedoms. In 2021, Juneteenth became a federal holiday. Locally, the Jamestown Juneteenth Festival has taken place for over 20 years during a weekend long event at Jackson-Taylor Park in the City of Jamestown. For more information visit Juneteenth of Jamestown, NY on Facebook.